Five Days Of Crazy Good Music: Settle For Me 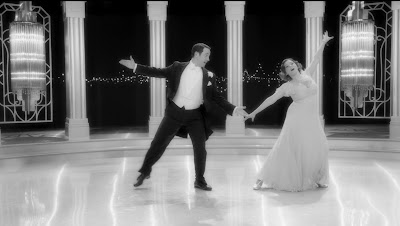 Rebecca Bunch (Rachel Bloom) is very much the focus of Crazy Ex-Girlfriend, hence why the show has its title. But one of the best aspects of Crazy Ex-Girlfriend in its initial season is how fully fleshed-out its supporting cast felt from the get-go. Rebecca's best pal Paula is a great example of this trait and Greg (Santino Fontana) is another shining showcase for how well Crazy Ex-Girlfriend depicted that Rebecca was not the only person residing in West Covina (Californiiiiiaaaaa!!) that was a tad bit off-kilter.

Now, Greg has layers to his personality and the occasionally conflicting sides of his demeanor are frequently depicted in song form. His lack of actual drive is seen in the song I Could If I Wanted To while his pervasive desire for Rebecca comes to the surface in Settle For Me, a song that has Greg attempting to woo over Rebecca in a musical number plucked visually right out of the 1940's that is very much upfront about the idea that Greg is pining for Rebecca even though she herself is enamored with one Josh Chan (Vincent Rodriguez III).

Instead of attempting to act like he's superior to Josh or try to coerce her into believing she truly is interested in himself more, a humorous frankness permeates the lyrics, with Greg reveling in the fact that he's the alternate in this situation. While making sure to note the positive attributes that come with him and Rebecca being together, most of the song is dedicated to Greg embracing how he's the human equivalent of "Plan B" or "2% milk" in this situation. The various comparisons are super duper humorous especially since they get really dark at times (Greg notes at one point that he's right here "in flesh and blood and self-hate!) and it can't be underestimated how crucial the song being paired with Fontana's vocals conveying his character sincerely desperate desire to be with Rebecca is.

The choice to set the tune in a 1940's swinger-type tune that channels the music of the Rat Pack is a most clever move since many of the romantic tunes by that group and others in that genre in that time period thrived on macho-infused confidence, an element that Settle For Me intentionally not only doesn't carry but seems to be a refutation of. If Frank Sinatra sang his songs to woo ladies by emphasizing her positive attributes and his own charm Greg is belting out a tune that channels this era of music in an effort to face reality and somehow score a romantic victory of sorts out of a situation not at all in his favor. In other words, Greg isn't looking to beat the odds with this song, he'd be totally fine with just co-existing with them so long as he gets a date with Rebecca!

Santino Fontana's vocals fit quite well with this type of musical genre and in the performance of the song in the episode it belongs to he and Rachel Bloom do the song-and-dance routine a tune from the 1940's requires exceptionally. And while Greg gets the lion's share of yuks in this musical number, Rebecca does get some noteworthy jokes in the form of her reacting to her abrupt wardrobe change by exclaiming "Oh sweet! A dress!" Above all else, it should be noted that Settle For Me has an unavoidable underlying sadness to it that shows the lengths Greg will go to to nab the fancy of a girl he admires. It's that kind of depth hiding beneath seemingly silly musical numbers that makes the supporting cast of Crazy Ex-Girlfriend so riveting and layered.
Posted by Douglas Laman (NerdInTheBasement) at 9:41 AM