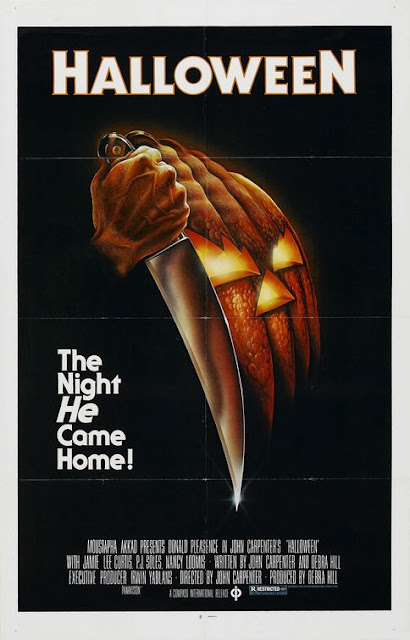 Even if no other high-quality horror films had been released that decade, it's quite likely that the 1970's would have cultivated a persona as a landmark decade for horror cinema solely thanks to the presence of the massive success of the micro-budget horror film The Texas Chainsaw Massacre. But that phenomenal horror feature would not be the only low-budget entry in that genre to soar in this era, as four years after Leatherface sliced up a bunch of teenagers Michael Myers would enter the world of horror cinema via Halloween and, much like Leatherface before him, change the landscape of horror movies forever.

Now, we all know who Michael Myers is at this point, he's permeated his way into pop culture in a way very few film characters, horror-centric or otherwise, have. But before the endless pop culture riffs, cosplays and remakes/sequels/reboots/whatever, there was just this 1978 John Carpenter motion picture that introduced the world to The Shape. And it still works incredibly well on its own merits as a horror film, one that dares the audience to witness a world perhaps quite like their own (tranquil suburbia) and watch it become invaded by the presence of ceaseless and vicious violence in the form of Michael Myers.

Encapsulating the emphasis this story has on commonplace elements, the lead character of this tale, Laurie Strode (Jamie Lee Curtis), is a completely normal individual who isn't related to Michael Myers nor has some sort of destiny that intertwines her with Michael Myers. Nope, she's simply a High Schooler whose conversations with her friends revolve around her social life and a crush she holds on a local boy. For her, it's just another weekend where she has to be the responsible figure in her group of friends. With Laurie and her ordinary existence properly established, having Michael Myers leap into the proceedings with his psychopathic ways makes his very presence all the more terrifying. He's like something from another planet compared to the people he's slaughtering and the environments he inhabits.

Juxtaposing the horrors of Michael Myers with more mundane victims and setting is a masterful way to exude tension and the dichotomy is only heightened by having Myer's mayhem set on the holiday of Halloween, a day of the year thriving on scares like haunted houses or pranks but those are the sort of scares people are in total control of. Nothing can keep Michael Myers contained, he is the apotheosis of the very sensation of fear. His very presence oozes menace, to the point that various excellent shots throughout the movie merely have to have him stand in the background for one to get a chill up their spine.

John Carpenter (who would go on to make the make similarly incredible horror film The Thing), is truly excelling as a director here with those aforementioned shots that truly allow Michael's horrifying nature be felt by the viewer in more subdued ways. He also composes the scores for this motion picture, believe it or not, and it's a similarly top-notch piece of work. In fact, it's a testament to how well-made it is that, despite hearing it so many times in more spoof-like proceedings over the years, hearing that iconic Michael Myers theme in its original setting still gave me a sensation of unease, so fantastic is Carpenter's work as a composer here.

While I've already mentioned how Halloween came out the same decade as The Texas Chainsaw Massacre, there's another film from this period of time that Halloween evokes in a clever way, that movie in question being fellow 1970's horror feature Jaws. Like the shark in Jaws, Michael Myers is an off-screen presence for much of movie, with a hand here, a shot from his point-of-viewer there, his face and clear shots of his entire body always being obscured from the viewer. The reason for this is obvious; Michael Myers won't let himself be in plain view until he's good and ready to inflict merciless pain on the various characters in the story, so why should the audience be the exception to the visual rules he's playing by? It's pretty clear that an incredible amount of consideration has gone into this production but all of that craftsmanship boils down to one fact above all else; Halloween is a truly terrifying movie.
Posted by Douglas Laman (NerdInTheBasement) at 9:22 AM