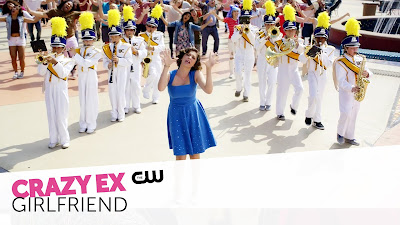 Crazy Ex-Girlfriend returns to The CW tonight, and in honor of its return, I've decided to do a column each weekday this week chronicling noteworthy songs from the first season.

And now, for the last entry in this column, let's go all the way back to the very first musical number on Crazy Ex-Girlfriend, a little ditty entitled West Covina. Now, in my piece on The Sexy Getting Ready Song (which, like West Covina, also appeared in the first episode of the series), I mentioned how that song had a sort of confidence and assuredness that immediately gave Crazy Ex-Girlfriend its own unique vibe and the same can very much be said for West Covina, a tune that also reinforces the fresh spirit that flows throughout Crazy Ex-Girlfriend as well as helps illuminate who exactly lead character Rebecca Bunch (Rachel Bloom) is.


Well, Rebecca Bunch is, during this song at least, full excited about her new home of West Covina, California, so much so that she burst into a musical number that fits snugly into a type of song frequently found in conventional musicals. This type of song is one that establishes the environment where any given musical will primarily take place as well as the protagonist's relationship to said environment. Classic examples of this kind of musical number can be found in famous tunes like No Place Like London in Sweeney Todd and Downtown in Little Shop Of Horrors.

For Crazy Ex-Girlfriend, the location its lead character croons about is West Covina, California, a city residing in Los Angeles County whose presence in pop culture is solely limited to Crazy Ex-Girlfriend if Wikipedia is to be believed. This is a small town lacking the razzle-dazzle of other areas of Los Angeles County like Hollywood, one that, like most towns, is more quaint than anything else. But that doesn't stop Rebecca from harmonizing about various items she finds in this town like an over-sized pretzel and an anime wig in a manner more befitting of someone who just gazed upon one of the eighth wonders of the world.

Of course, it isn't just pretzels and anime wigs that reside in West Covina, California. Rebecca's crush from time spent at a summer camp years ago, Josh Chan (Vincent Rodriguez III), sheerly by coincidence, happens to live in West Covina, California. In fact, she ran into him in her previous living space, New York City, and decided to move to West Covina after she learned that's where Josh lives! Crazy how the coincidences of life can work, huh? Of course, Rebecca is denying vehemently throughout the song that Josh was the inspiration for her major life adjustment, a trait that would extend beyond this initial musical number.

West Covina shares many traits with the bevy of musical numbers the show would produce in the episodes to come, namely its ability to balance characterization with a deep knowledge of musicals and fantastic humor. It's kind of remarkable that a show this excellent hit it out of the ballpark on its very first musical number, but considering the quality clearly seen in West Covina, that's exactly happened. This would be the first time Crazy Ex-Girlfriend knocked off people's socks with a tremendous musical number and it most certainly would not be the last instance of such an event occurring.

Well folks, thank you so much for reading these this week! Hope you had as much fun revisiting some musical highlights of this show's first season (and I barely scratched the surface on noteworthy musical numbers from this program's first season, believe you me) as I did writing about them! Don't forget to catch the season premiere of Crazy Ex-Girlfriend on The CW at a 9 PM Eastern Time and 8 PM Central Time!
Posted by Douglas Laman (NerdInTheBasement) at 12:10 PM