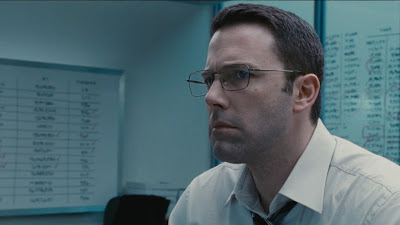 Ben Affleck scored another box office win this weekend with The Accountant, which grossed $24.7 million in its bow.  That's a considerably larger opening weekend than other like-minded action movies such as Alex Cross and John Wick. The advantage The Accountant had was the presence of post-Argo/Gone Girl Ben Affleck and a strong marketing campaign from Warner Bros. that gave the feature a vibe quite unlike anything else in the marketplace. Doesn't hurt that there aren't too many action movies out right now, giving The Accountant another reason it our-performed expectations. With an A CinemaScore under its belt, it wouldn't be surprising to see The Accountant end up over $70 million domestically.

Kevin Hart: What Now? took down a notable box office record this weekend, the biggest opening weekend for a stand-up comedy concert film. With $11.98 million over the weekend, Kevin Hart's newest film beat out the $11 million debut of The Kings Of Comedy to take this record. No shocker there, since Hart is coming off of two of his biggest hits ever (Central Intelligence and The Secret Life Of Pets) and his last stand-up comedy concert film (Kevin Hart: Let Me Explain) was also a big o'l hit.

In second place this weekend was The Girl On The Train, which grossed $11.97 million, a 51% decline from last weekend, to bring its domestic cume to $46.5 million. The $45 million budgeted movie still has a ways to go before its profitable and this isn't exactly the most promising second-weekend hold. The Girl On The Train is likely going to come to a halt in the $65-70 million range

In its third weekend of release, Miss Peregrine's Home For Peculiar Children snatched up another $8.8 million, a 41% decline from last weekend. taking its cume to a decent $65.7 million. Also in its third weekend of release domestically is Deepwater Horizon, which felt the brunt of The Accountant entering the marketplace and lost 46% this weekend to gross another $6.2 million, bringing it's underwhelming domestic haul to only $49.2 million in 17 days. Look for Deepwater Horizon to close its domestic haul in the $60-65 million range.

Storks had a solid hold this weekend, dipping only 31% to add $5.7 million to its domestic gross. Unfortunately, its domestic haul still stands at only $59.1 million, a subpar cume for a major computer-animated family film, even one that costs only $70 million to make. It looks like Storks will end its domestic run around $75 million. The Magnificent Seven kept on riding, losing 41% to gross another $5.3 million, bringing it domestic gross to $85 million. The jury's still out on if this one can get to $100 million domestically, especially given that there's a horde of new releases opening this coming weekend that will likely steal away screens from this Denzel Washington action film.

And then there's the third new wide release of the weekend, Max Steel. This one grossed only $2.1 million at 2,034 locations, making it the eleventh worst opening weekend ever for a movie opening in over 2,000 theaters. The best thing one can say about this opening weekend is that it wasn't as bad as Jem And The Holograms, which really is a high bar to clear, huh? No shocker this one tanked considering there was zero notable marketing to speak of and the character of Max Steel isn't exactly exceptionally popular. I'd be shocked if this one exceeds $4 million domestically.

Also debuting this weekend in substantially less theaters (only 303 to be precise) was Priceless, which grossed a so-so $703,200. Expanding their theater counts were two arthouse titles in their third weekends of release, the first being Denial which grossed $398,241 at 96 locations for a per-theater average of $4,148, bringing its 17-day domestic total to $839,731. Faring much worse was American Honey, which grossed only $142,263 at 135 locations for a per-theater average of only $1,054. American Honey has only grossed $362,430 in its domestic run and with middling grosses like the one it conjured up this weekend it's doubtful it'll add very much to its domestic run.

Another horde of titles ended their domestic box office runs this past Thursday. One of them was one of the biggest box office bombs of 2016, The BFG, which closed with only $55.4 million. making it one of Steven Spielberg's lowest grossing movies ever (only 6 of his feature-length films have made less in the US). Mike And Dave Need Wedding Dates also concluded its tepid domestic run with only $46 million. On only a $33 million budget, this one wasn't terrible considering it did manage to grab another $30 million overseas, but it's easy to see 20th Century Fox wanting considerably more from the project. Hands Of Stone only wound up with $4.7 million, making it the 2nd lowest grossing movie that went into wide release (only behind the 1993 motion picture This Boy's Life) ever for Robert DeNiro. Hillary's America closed out with a $13 million sum that's actually great as far as political documentaries go but is beneath the domestic grosses of both of Dinesh D'Souza's past movie. Finally, The Wild Life ended its pathetic domestic run with only $8 million, an anemic sum that makes it the fifth lowest-grossing wide-release computer-animated domestic release of time.

Well, the box office has been in rough shape this Fall, thanks to the dire lack of a huge grossing blockbuster (like past Fall titles Gravity or The Martian), no big animated family film (like the Hotel Transylvania movies) or a notable horror title (like Paranormal Activity 3 back in 2011) that past Autumns had to boost their grosses. The Top 12 this weekend exemplified how rough things have been with the combined gross of these titles adding up to only $88.5 million, making this the lowest grossing 42nd weekend in any given year since 2008. We'll see if Madea and Jack Reacher can improve things this coming weekend.
Posted by Douglas Laman (NerdInTheBasement) at 1:35 PM