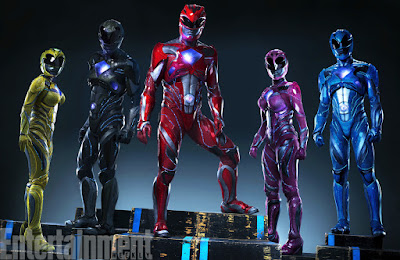 Two trailers debuted at the New York Comic-Con this weekend that made people everywhere go...."OK". Or maybe that was just me. As a full-on Marvel geek and a guy whose never seen a lick of Power Rangers stuff, these new trailers for the new Iron Fist Netflix show and the new dark n' gritty Power Rangers movie just don't do it for me. How about we go through each trailer and talk about why I'm personally on the fence on both projects, OK?


First up, Iron Fist!
I spy a hallway fiiiiiigggghhttt!

So, this looks visually like Daredevil season 2 all over again and we get The Hand as bad guys this season too instead of Steel Serpent or any of Iron Fist's interesting bad guys! Nope, gotta do those stupid overpowered ninjas from the inconsistent second season of Daredevil again! Look, with the lack of a tantalizing central notable bad guy from the comics being adapted in live-action for the first time (something the Netflix Marvel shows have been super good at thus far, Diamondback on Luke Cage excepted) and me being dubious that you can really do Iron Fist well on a TV budget, my expectations were at rock bottom for this show and that's not without getting into the obviously racially insensitive stuff associated with casting a white guy as the titular superhero. This trailer does nothing to sway me honestly and only made me wish we could skip this show and get onto the The Defenders (with Sigourney Weaver as the villain!!!) and Jessica Jones season 2 faster. Please don't screw up Colleen Wing, that's all I ask Iron Fist TV show.
And now, Power Rangers!

I think it's a testament to how much Hollywood is dominated by white dudes that the visual touchstone for every high school movie is the one where the lead character sexually assaults a woman, the main moral for the female characters is "Look pretty and that's all that matters" and there are no PoC whatsoever around. Seriously, can we move on from this fetishization of The Breakfast Club? It's cool if you like the movie, but it being the go-to reference ofr the majority of high school movies is ensuring that new high school movies (at least the ones that aren't The Spectacular Now or The Diary Of A Teenage Girl) lack their own identity.

Anywho, yeah, the Power Rangers trailer (complete with an eye-rolling "somber" cover of a Johnny Cash song) leans heavily on The Breakfast Club imagery. I've only seen brief snippets of footage from the Power Rangers TV show but don't these kids turn into robot dinosaurs? Can't we see that instead? And not shaky-cam footage of them jumping across ravines? Here's to hoping the movie itself is better than this teaser trailer that feels more like a parody (and a so-so parody at that!) of what a gritty Power Rangers movie would look like. I do hope Elizabeth Banks brief appearance is a glimpse at the sort of hamminess she'll deliver in the movie proper, now that could be a lot of fun, I freely admit.
Posted by Douglas Laman (NerdInTheBasement) at 9:05 AM