Scares Are Minimal In The First Paranormal Activity, The One That Started It All 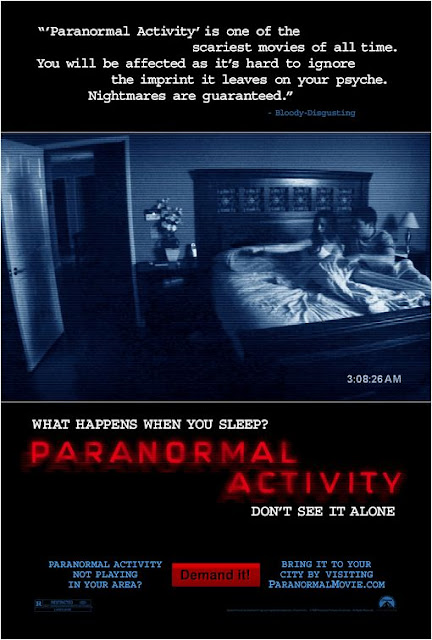 Though it may have been released in 2009, Paranormal Activity was actually filmed in 2006 (something reflected in on-screen text in the film itself), an entire decade ago and a year before the first iPhone was released. Imagine how much technology has changed in the years since then. Everyone's got a portable camera/computer/entertainment system residing in their pocket now and entire films (like Tangerine) are filmed on people's phones now. Analyzing how much technology has changed in the epoch since Paranormal Activity was filmed provides a lot more entertainment than the movie itself, which is just disposable horror fare at the end of the day.

The story of Paranormal Activity is a simple one, telling the tale of a young couple, Katie (Katie Featherstone) and Micah (Micah Sloate), grappling with a demon that's attached itself to Katie since she was young. Throughout the running time, we watch the terrifying sight of fade-in/fade-out transitions between shots that utterly decimate the illusion that this is actual found-footage. Spooky! There's also endless sequences of the two sleeping and suddenly....a door moves on its own. The terror! John Carpenter and Wes Craven are shaking in their knees!

Truth be told, Paranormal Activity's restraint in terms of the scares it orchestrates is admirable, since the limited budget of the enterprise has director Oren Peli coming up with more low-key ways to frighten the audience that don't rely on jump scares and gratuitous blood. The problem here is there's no interesting characters to latch onto in this story which is a serious issue considering so much of the running time is dedicated to Katie and Micah in the daytime coming to terms with the potentially grisly ramifications of having a demon be so obsessed with you.

Neither of these two are all that compelling and it becomes more of an endurance test trying to get through their extended dialogue sequences and the night-time set scenes where the majority of the scares occur aren't nearly terrifying enough to compensate for the tedium that consumes the motion picture. The only really scary scene to speak of is a very true-to-life moment where Katie breaks down after reading on the internet what kind of fate befell other individuals who were possessed by similarly fervent demons.

There's a sense of authenticity in this scene, relying on a raw depiction of a human being coming to terms with a looming threat, that the rest of the movie could have desperately used. Otherwise, it's just a rote horror movie exercise more admirable (thanks to the sense of restraint on display and the fact that a movie this cheap and home-made managed to land major worldwide distribution) than actually entertaining or scary. For a far scarier way to do a prudence-laden found-footage horror movie, watch The Blair Witch Project or Cloverfield, both of which manage to tap into universal fears under heightened circumstances in far more terrifying ways.