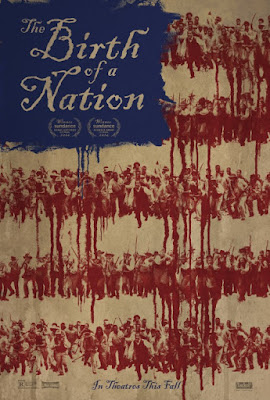 I've been seeing a lot of think pieces about 2016 being the year cinema died or whatever, but maybe a more appropriate label to place on 2016 will be that it was  the year that delivered a bunch of OK but not really all that substantive biopics. Last month brought the OK Sully and the better-but-lacking-in-depth Snowden and now The Birth Of A Nation comes around to make the group as a trio. Regardless if this is a fluke or a larger signal of a trend of 2016 cinema, The Birth Of A Nation is yet another alright motion picture that lacks anything really to say regarding the real-life subject it concentrates its entire story on.

A little personal context here; I grew up in (and still reside in) Texas, a state whose educational curriculum basically ensures slavery, one of the most horrifying atrocities ever to occur over centuries in this country, is basically a footnote, at best, in History courses. So I was mostly unaware of Nat Turners very existence until I started to hear about The Birth Of A Nation and I cannot imagine I'm not the only one. A feature-length film centered on his life and the slave uprising he led could be a great way to introduce general audiences (which includes a whole bunch of unknowledgeable crackers like myself) to this man, but I'd honestly be hard-pressed to tell you all that much about the real-life man The Birth Of A Nation focuses on despite spending two hours with Nate Parker's depiction of Nat Turner.

For those unaware of who Nat Turner (played here by writer/director Nate Parker) is, he was a man who managed to learn to read at a young age and became a preacher of sorts for various slaves at plantations near where he was kept as a slave. In August 1831, Nat led an uprising of fellow slaves who killed over 50 individuals. It's a plot that's rife with dramatic potential to examine America's past in an unflinching manner, and the moments where The Birth Of A Nation really soars is when it utilizes that potential to examine the humanity of slaves, people who were told every moment of every day by slaveowners that they had no humanity to speak of.

The best scene of the entire movie, for my money, takes place the morning after the first attacks by Nat and his comrades, with the various individuals remarking on the tasks and humiliation they'd be receiving at this time of the day if they were still slaves. That's the sort of fascinating introspection that the overall movie just doesn't carry all the way through, particularly with Nat Turner, whose depicted as less of a human being and more of a figure of folklore-like reverence before he even leads an uprising. We even get an opening sequence (whose historical authenticity I am unsure of) where adults tell a young Nat that his birthmark foretells him having strength and courage in life.

Now, this isn't an inherently bad approach to take with this character, but it doesn't fit the appropriately serious-minded movie he inhabits. The various events that lead up to Nat deciding its time for a revolt don't feel much like character growth but rather just going through a checklist of requisite events needed to be depicted before we get to the inevitable slave uprising. Even Nat's wife, Cherry Turner (Aja Naomie King), doesn't help unwrap new aspects of Nat's character, she's just there to provide more motivation (via being raped and beaten) for Nat to lead the aforementioned rebellion. Nat even has a daughter that's briefly glimpsed at in a montage that I (and the script apparently) totally forgot about, to the point where, when a secondary character mentions Nat's offspring, I found myself honestly pondering if the film had ever shown said daughter beforehand.

It's a real shame The Birth Of A Nation fails to get at any larger themes in its lead character or its overall story because there are good elements to be found in here, no question. The period-era costumes are well-made, Nate Parker actually turns in a pretty good lead performance and it's well-filmed too even if there are some instances of over-the-top imagery that, like the treatment of Nat as a character, don't quite work in the more restrained environment they're occurring in. If The Birth Of A Nation had more substance to line its script with, it might have been something truly special, but at least the final product is a serviceable but not especially noteworthy story about Mr. Nat Turner.