Five Days Of Crazy Good Music: I Love My Daughter 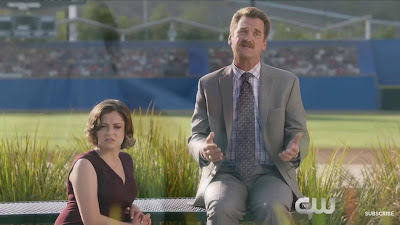 While Crazy Ex-Girlfriend definitely has a foot firmly placed in the world of Broadway musicals (just look at West Covina, the very first tune of the whole show), the great thing about the program is how it explores a wide gamut of musical genres and differing artists. While this wouldn't be the first time country music showed up on Crazy Ex-Girlfriend (we'd also have Valencia's Women Gotta Stick Together song coming our way eventually), the tune I Love My Daughter does perfectly encapsulate a side of country music that could exist as its own subgenre; songs about dads harmonizing about their obsession with their daughter.

Now, there's nothing wrong at all with fathers expressing their love for their offspring, but these songs go hand-in-hand with a bizarre attitude I see all the time in Southern culture which is the idea of a father treating their daughter like property. Again, it's totally understandable for a parent to not want harm to come to their child, but songs like Rodney Atkins Cleaning This Gun merge the gun-worshipping side of Southern culture with the "My daughter is a fancy object and I will control her every move so help me God" side of Southern culture to create a song that Redneck fathers will adore and everyone will just squirm in their seats in understandable discomfort over.

These songs finally get a vital skewering with I Love My Daughter, which Rebecca's (Rachel Bloom) boss, Daryl (Pete Gardner), croons to express how much he adores his daughter. The oddness of various father.daughter activities (like the father/daughter dance) is depicted through the lyrics, which utilize the precise type of adjectives utilized to describe ones daughters in the actual songs it's parodying. Also help the song to be as funny as it is is the way Gardner does an excellent job musically conveying Daryl's slow realization that some of these father/daughter bonding exercises are just supremely outlandish.

And then it all culminates in him describing the ritual of how, one day, he will be giving his daughter away at her wedding..and then interjects"Not like I ever had her...what a weird thing to say!" The final verse has Daryl basically collapsing under the realization that this type of song is just more creepy than anything else, with him eventually just giving up outright. In the show itself, this song is accompanied with various pieces of visual iconography associated with father/daughter relationships and really, the random shot of stampeding horses at 1 minute and 54 seconds into the performance is enough to make this a noteworthy song from a show jam-packed with exemplary musical numbers.

Seeing Daryl grow and progress over the show has been a real treat, a prime example of what happens when good TV writers take hold of a certain supporting character early on in a show's run and let said character flourish in unexpected directions. I Love My Daughter is an early sign that Daryl was going to be something special as a character as well an uproarious take-down of a skeevy country music subgenre that turns daughters into just objects their fathers can be possessive of.  I'm sure Rodney Atkins is looking for Pete Gardner right now with that gun he was cleaning, but for the rest of us, this is a fantastic example of the sort of musical versatility Crazy Ex-Girlfriend has in spades.
Posted by Douglas Laman (NerdInTheBasement) at 10:26 AM