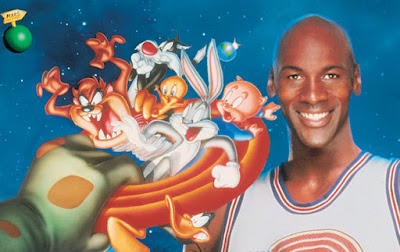 Well, I hope you're happy. Yes, I'm talking to you specifically readers who adore Space Jam. I know my generation loves this movie something awful, but even before I became a snooty film critic, I obtained a particular disdain for this Joe Pytka "movie" because of how it shoved all the Looney Tune characters I loved to the sidelines in favor of a corny biopic about Michael Jordan. Now that I'm older, my feelings for the film have manifested into just resentment more than anything else. Yeah, I guess the theme song is kinda catchy but Space Jam really has nothing else going for it. It's a 90-minute commercial for Michael Jordan and that's it.


But I know art is subjective (that's what makes art so much fun to discuss!) and many enjoy the film and good for them I sincerely say. We all need happiness in our lives and maybe Space Jam devotees will find such an emotion when they experience Space Jam on the big screen next month, on November 13th and 16th specifically. Fathom Events is in charge of this re-issue just like they were the ones handling the limited theatrical re-release of Taxi Driver that happened this month. I think that's the first time Space Jam and Taxi Driver have ever been in any way connected.

So, before Space Jam 2 (presumably directed by Justin Lin and starring LeBron James) arrives in the next few years to slam-dunk its way into the hearts of millennials everywhere, check out the original "classic" desecration of the creations of the Termite Terrace crew, er, movie, on the big screen. It's the movie that's so 90's all it needs is parachute pants and an obsession with Goof Troop. And it's got a script that, as Foghorn Leghorn would put it, is about as sharp as a bowling ball. Oh, and do check out what some dude over at The Dissolve had to say about this 1996 feature!
Posted by Douglas Laman (NerdInTheBasement) at 6:54 PM