Deceit And Romance Are Parallel Forces In The Handmaiden 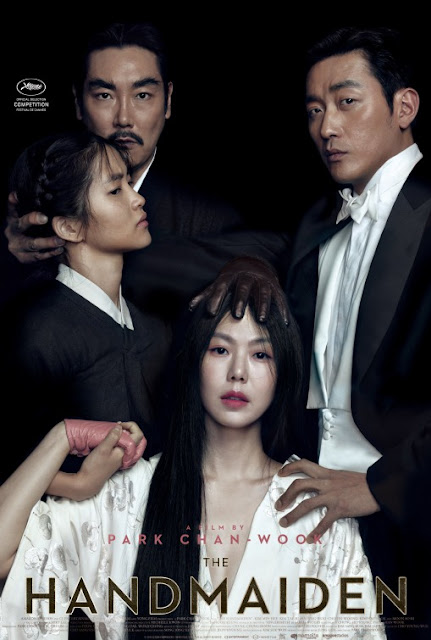 My unfamiliarity with the works of South Korean filmmaker Park Chan-wook meant I walked into my screening of The Handmaiden with a sense of uncertainty wafting over my being. I'd heard plenty of positive things about this project, but like I said, I haven't seen past Park Chan-wook films like Stoker and Oldboy, so I had no idea what kind of atmosphere, themes or recurring storytelling ideas run through his work. My lack of exposure to his past efforts means I can't say exactly how The Handmaiden fits into his body of work as a whole, but I can say that I'm extremely curious to see other pieces of work Park Chan-wook considering just how entertaining and well-crafted The Handmaiden is.

In the early part of the 20th century, an orphaned pickpocket named Sook-hee (Kim Tae-ri) is looking to improve her social status by cooperating with a plan concocted by Count Fujiwara (Ha Jung-woo), which entails the Count wooing the heart of Lady Hideko (Kim Min-hee), a woman with expansive riches, and Sook-hee will befriend Hideko by becoming her newest handmaiden. It was a simple plan, one that would bring both the Count and Sook-hee a new social and economic status, but there's an extra wrinkle in the plan; a romance has blossomed while they were executing their plan.

But this romance is not between the Count and Lady Hideko. No, instead it is Sook-hee and Lady Hideko who have begun to become attracted to each other, their feelings for each other growing stronger by the day. To spoil all the unexpected plot related shenanigans that ensue would not only ruin the fun of the movie, but me attempting to describe such various plot turns would likely come across as something akin to Stefon listing off the various aspects of a hip new New York club. Trust me though, it's a pretty fun experience to see these characters reveal their innermost desires and true allegiances.

The Handmaiden works as almost a Russian nesting doll of a movie, one with a surprise around every corner and nothing being as it seems. Now, that could come off as a blatantly cheap ploy to drum up drama as a substitute for well-written characters in weaker movies (*cough*The Village*cough*The Girl On The Train*Cough*), but that's not what The Handmaiden is after at all. Instead, the screenplay by Park Chan-wook and Chung Seo-kyung uses plot twists and story-related surprises as they're supposed to be used, as a way to deepen the characters in the story and their own individual plights. The plot can work just fine on its own before the twist enters the proceedings, but once its presence is felt, new layers are added to the plot and characters.

That's how the best storytelling twists are used, not just as a cheap gimmick designed to create big "SURPRISES!!" at every opportunity for no reason. Also helpful in the execution of these twists is the presentation of the various storytelling-related reveals in the story. Again, I'm not gonna get into spoiler-laden territory here, but the way the story is structured allows the characters plenty of time to breathe and let them dictate the myriad of plot twists and reveals within instead of the other way around. The Handmaiden kept me gleefully guessing and uncertain of where it would go next and goodness gracious is that a wonderful feeling to experience!

Sure, the script is a major component of why The Handmaiden works so well, but one cannot talk about the quality of this movie without also discussing the talented actors headlining. Looking at her IMDB, I'm utterly shocked that this is Kim Tae-ri's first feature-length motion picture appearance. She's so damn good, complete with a strong screen presence and frequently strong comedic timing, and hopefully this will be far from the last time she appears in a major motion picture. She's a real find, and the same can be said for Kim Min-hee, who not only works quite well on her own but also has strong chemistry with Kim Tae-ri in their various scenes together.

Aside from being just a crackling good thriller, The Handmaiden also serves as a visual feast, with loads of well-filmed sequences thriving on unique landscapes and period-era appropriate (this tale takes place in the early 20th century in the era where Korea was ruled over by Japan) costumes. Looking back on it as a whole, I find it interesting how even the handful of moments in The Handmaiden (like an extended bit involving Lady Hideko and a wooden puppet) that don't quite work 100% still are visually ambitious enough to carve out a space in my cranium. That's what happens where you swing for the fences with a superb movie like The Handmaiden that thrives on unpredictability and thoughtfully created characters. Totally see this one in a theatre if you can, it's quite unlike anything else you'll see in theaters in a while!
Posted by Douglas Laman (NerdInTheBasement) at 9:02 AM