Capone Is No Ordinary Gangster Movie, For Better and For Worse 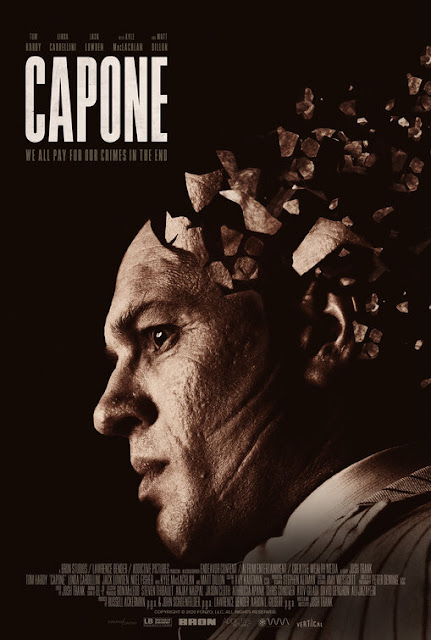 The best way to explain what kind of movie Capone is is by saying that if this movie had gotten a theatrical release, it would have garnered an F CinemaScore. Theaters across the nation would have been filled with audiences reacting to Capone finishing not with applause but with cries of "That's it?!?" and befuddlement. This is not meant as a way of saying that Capone is a bad movie but rather that it's not going to be to everyone's taste. Anyone expecting anything remotely resembling a traditional gangster movie or biopic drama will be understandably disappointed. Capone is its own creature, one that's messy as heck and isn't quite as strange as it could have been. However, it's also frequently intriguing and has go-for-broke energy that's hard to resist.


Capone follows the last year in the life of Al Capone (Tom Hardy). Recently released from his prison sentence, Capone now lives with his wife, Mae (Linda Cardellini), in his lavish mansion. However, his finances are beginning to run dry while his mind is deteriorating thanks to his case of neurosyphilis. The once lofty gangster kingpin who made everyone shake in their boots is now incapable of having a meal without forgetting where he is. As Capone goes on, writer/director Josh Trank chronicles Al Capone slipping farther and farther away from reality while interest from outside parties increases over $10 million Capone apparently buried somewhere.


Capone evokes a lot of different types of movies. Its exploration of the apparent mortality of a once-powerful gangster echoes The Irishman. The heavy amount of farts elicit memories of Swiss Army Man. Meanwhile, the surrealist sequences that challenge both Capone and the viewer to figure out what is real channels the vibe of Richard Kelly movies like Donnie Darko and Southland Tales. Thankfully, Capone isn't just leaning on past movies to get by. It's also channeling the ambitious nature of these earlier workers to create its own distinct, though highly imperfect, aesthetic. Such an aesthetic tends to be at its very best whenever it's exploring the shell of a man Al Capone has become.

These kinds of scenes don't see writer/director Josh Trank asking the audience to find sympathy for a rampant murderer. Instead, he wants viewers to be haunted by recognizing what little of Capone is left after all these years. He built up a criminal empire but it couldn't save him from a disease that brought him straight down to Earth. A particularly affecting example of Capone reinforcing the vulnerability of its central subject is a scene that, out of context, sounds like it should be a trainwreck. During an in-home screening of The Wizard of Oz, Capone leaps out of his chair and begins singing along to the Cowardly Lion song If I Were King of the Forest.

What could have been unintentional comedy becomes the most poignant scene of the whole movie. A man who was once a criminal king now sings along to a tune about yearning for royal power. How the mighty have fallen. This scene also works due to it quietly grounding Capone's condition in realistic trappings of diseases that produce cognitive decline. Capone can remember each and every word of If I Were King of the Forest. while also forgetting his last name. That rings home as authentic as somebody who has had relatives who struggle with Alzheimer's. Later sequences also visually manifest Capone's mental struggles but they trade out a tragic ambiance for a more haunting vibe.  Capone walking through a crowded party while Louis Armstrong sings Blueberry Hill particularly packs a bittersweet wallop while a confrontation between Capone and Matt Dillon's character ends with some truly disturbing imagery.

Capone does so well with creative representations of Capone's damaged psyche that the more conventional parts of the writing stick out like a sore thumb. For example, Trank's decision to reveal early on that Capone isn't imagining things, he actually is being followed around by people robs Capone of some of its tension. The choice to frequently cut away from Capone to FBI agents and other people tracking Capone down is also a poor choice. Capone works best when its lead character is living in his own isolated world. This provides a reflection of how Capone's mental condition is creating barriers between himself and everyone around him. Cutting away to locations and scenes entirely devoid of Capone undercuts that. Meanwhile, a number of visual metaphors, including a young child's balloon, are on the overly obvious side of things.

EL-P's score also isn't as distinctive as you might expect from a member of Run the Jewels composing the score for a gangster movie. Capone has a number of shortcomings but writer/director Josh Trank does also hit his fair share of bullseyes in his rampantly unorthodox approach to the final year of Al Capone’s life. For good and for ill, his ambitious work here will certainly be on my mind for a while. The same can be said for Capone's equally erratic & audacious lead performance, which comes courtesy of Tom Hardy. Shocking no one, the man responsible for Bane's voice turns in an Al Capone performance that’s thriving on the strange and absurd. Armed with a voice that sounds like Nick Nolte doing an impression of Nicolas Cage impersonating Bugs Bunny, Hardy's over-the-top performance occasionally lapses into caricature. However, his commitment to the part is consistently impressive and it's impressive how he gets you to accept his version of Capone as a person over the course of Capone's runtime (though the makeup work on his face is always distracting).

Hardy's performance is at his best when wrings something human out of the sight of diaper-clad Al Capone wielding a golden Tommy Gun. The fact that Capone has willed that proceeding sentence into existence means this movie must be doing something right.
Posted by Douglas Laman (NerdInTheBasement) at 11:22 AM