A Colt is My Passport Travels To Enjoyable Action Movie Territory 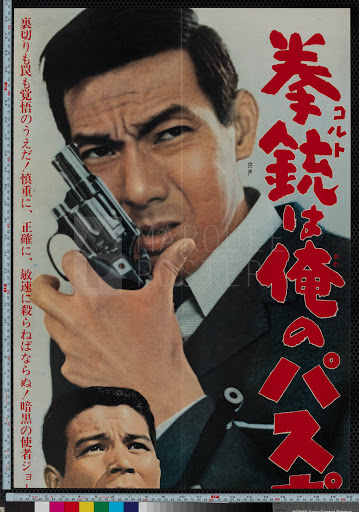 I gotta give a hearty thank you to Patton Oswalt for putting A Colt is My Passport on my radar. A 1967 yakuza-noir movie from director Takashi Nomura, Passport was heavily praised by Patton Oswalt in his Adventures in Moviegoing interview on the Criterion Channel. He called it the kind of movie that produces moments so cool one can't help but shout out "YEAH!" when they occur. Turns out, Oswalt, that cinematic devotee, was right on the money. A Colt is My Passport is an extremely interesting yarn, particularly in terms of seeing how it fuses together so many distinct cinematic influences.


Shuji Kamimura (Joe Shishido) is a contract killer who, alongside his partner Shun Shiozaki (Jerry Fujio), has been hired by a yakuza boss to take out a former employee. Kamimura is no stranger to bloodshed, he has no gripes with taking on this job. At first, things to go smoothly as Kamimura takes out his target without much trouble. However, problems emerge when Kamimura and Shiozaki try to return home. Henchmen belonging to the now-deceased target prevent them from leaving. Now he's trapped in a country overrun by assassins thirsting for revenge. There's also the extra wrinkle of his employer deciding to wash his hands of Kamimura as part of a new business deal.

Not to lean too heavily on Alicia Malone's Criterion Channel interview with Patton Oswalt, but their comments regarding A Colt is My Passport containing a number of different cinematic influences kept on running throughout my mind while watching it. For example, director Takashi Nomura demonstrates a clear love for classic noirs in a number of aspects through Passport. A grim protagonist who has got a loose moral compass, the heavy use of shadows, and the backdrop of a morally corrupt society, they all evoke the likes of The Maltese Falcon. Aspects of Passport like the evocative shadow-heavy imagery make sure the production is able to stand on its own two legs rather than just a pastiche of classic noirs.

Meanwhile, Westerns get channeled all throughout the movie, particularly in a final stripped-down showdown between Kamimura and his attackers. Nomura's artistic influences are apparent in Passport but this movie is so much more than just a grab-bag of Nomura's favorite movie genres. Passport has plenty of its own distinct personality traits, including the interesting fact that Kamimura is constantly having his vulnerability emphasized. Now, Passport's protagonist is certainly cool as a cucumber person with deadly skill to spare. But his humanity nicely gets reinforced throughout the story, he's just as capable of leaving a hand-to-hand fight with a bloody lip as he is to leave victorious.

I especially love how this facet of Kamimura's personality gets employed in Passport's climax. In order to pull off a nifty and explosive trick on his enemies, Kamimura must get run over by a car. Just for a minute. No biggie. When that happens to him, it actually causes you to flinch and makes you wonder if Kamimura's master plan has been cut short. A Colt is My Passport's ability to embrace the fact that its lead character is only human informs much of the films riveting tension during its creative action scenes. Heed Patton Oswalt's advice. A Colt is My Passport is indeed an enjoyable and grimy action tale.
Posted by Douglas Laman (NerdInTheBasement) at 12:47 PM