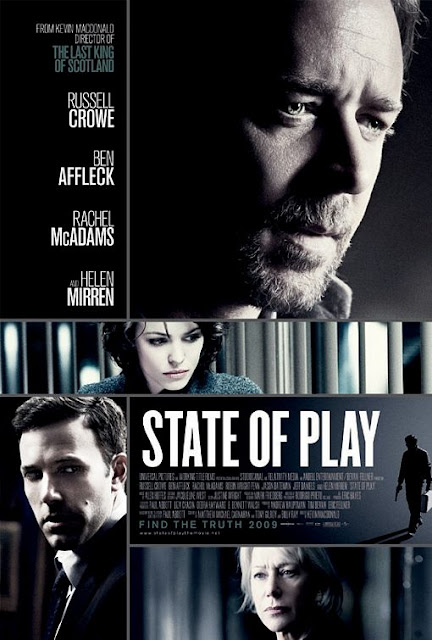 In my opinion, Russell Crowe is at his best playing morally complicated figures as prone to darkness as they are helping people. When he's playing a straightforward biopic protagonist in something like A Beautiful Mind, I just can't buy him. Even his lead performance as the action hero in Gladiator doesn't quite work for me. But put Crowe in Noah, The Nice Guys or the 2009 movie State of Play, suddenly we're cooking with gas. Crowe's genuinely gifted at portraying rough and tumble figures who seem to have leaped out of reality rather than a studio executive's cliche-ridden idea of what a "tough guy" is.  There's actual menace and unpredictability to his best performances and he's even able to imbue a distinctly different personality to, say, his version of Noah compared to his Nice Guys role.


State of Play provides ample ground for Crowe to excel with the role of reporter Cal McCaffery (Russell Crowe). Something I immediately like about McCaffery: he's always eating. This is made clear in McCaffery's introductory scene, where he's shown chowing down on some Cheeto's while belting out classic Irish shanties in his car. Throughout the rest of the movie, he's seen frequently nibbling on candy or getting diet soda out of a nearby vending machine. It's a nice detail to the character that lends McCaffery a relatable human quality. It's also smart that the quartet of screenwriters (which include Tony Gilroy and Billy Ray) don't use this trait of McCaffery as fodder for cheap fat jokes.

Anywho, McCaffery is investigating a double murder of a pizza delivery guy and a briefcase thief when he's suddenly informed of troubling news. His college roommate turned U.S. Congressman Stephen Collins (Ben Affleck) is going through major turmoil. An office worker he was having an affair with has just died. Investigators are claiming it's a suicide but could this development be linked to that double murder? Could somebody have killed those two guys and Collins' lover as part of some grander conspiracy? To get to the bottom of this mystery, McCaffery must team up with internet blogger co-worker Della Frye (Rachel McAdams).

Thankfully, an early rivalry dynamic between McCaffery and Frye centering on Frye being an "inferior" internet journalist gives way to a far more interesting rapport between the duo. State of Play's greatest shortcoming is in not giving enough of an overall arc for Frye to navigate but at least she's spared a predictable romantic subplot with McCaffery. Meanwhile, the screenplay fares far better in just making a compelling political thriller yarn. State of Play doesn't rewrite the rules of this subgenre but it does the basic tenants of these types of films nicely. If you're not gonna reinvent the wheel, you might as well give me a pretty good version of the traditional wheel.

Twists are delivered frequently without becoming gimmicky. One final rug-pull, in particular, works quite nicely in both taking the viewer by surprise and in recontextualizing all the proceedings actions of one of State of Play's central characters. Meanwhile, the plot is constantly on the move, there isn't really an extraneous boring scene to be found here. State of Play also gains my favor by using two of my favorite movie tropes. The first is montages of journalists working together to scrape up clues. It's always so satisfying to see a well-oiled machine of people just working together smoothly. The other is whenever a secret villain inadvertently discloses a piece of information they weren't supposed to.

No matter how many times I see a protagonist gravely murmur "I never mentioned/said [Insert Valuable Information Here]", I'll always get a thrill out of it! State of Play's nicely-realized versions of familiar political thriller elements is executed under the direction of filmmaker Kevin Macdonald. His choice to film scenes set at McCaffery's newspaper workspace and scenes set on Capital Hill in 35mm film and digital photography, respectively, is one of his more clever and interesting maneuvers behind the camera. It also proves to be a solid visual extension of how McCaffery represents an old way of approaching the world (newspapers/35 mm film) while younger characters like Collins represent newer ways of approaching the world (digital photography). Those are the kind of thoughtful touches that help elevate State of Play into a surprisingly absorbing thriller despite its familiar qualities.
Posted by Douglas Laman (NerdInTheBasement) at 1:47 PM