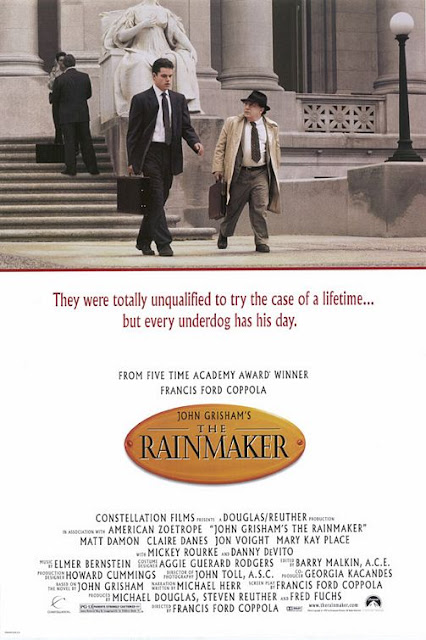 The Rainmaker may sound like the name of a supervillain origin story but it's actually a film adaptation of a John Grisham courtroom novel of the same name. The protagonist of the piece is young lawyer Rudy Baylor (Matt Damon). A devotee to the law and also the owner of a zoo, Baylor finds employment working for a famous lawyer by the name of Bruiser (Mickey Rourke). While working for Bruiser, Baylor partners up with Deck Shifflet (Danny DeVito), who teaches Baylor the tricks of ambulance chasing. Eventually, Baylor gets entangled in a trio of court cases, the most prominent of which involves helping a family take down an insurance company that denied their son a life-saving procedure.


The other two cases involve an elderly woman, Miss Birdie (Teresa Wright), who's trying to get her will in order as well as a lady named Kelly Riker (Claire Danes) struggling with a physically abusive husband. Some movies would opt for just one of these storylines instead of cramming all three of them into one movie. But screenwriter Francis Ford Coppola (who also directs) decides to try his hand at executing all three at once, plus additional subplots dealing with Rudy and Deck starting up their own independent lawyer agency. There's a whole lot going on in The Rainmaker but there's little of actual substance to be found. The movies like a stand-up comic who keeps on blabbering in the hopes that they can distract from how unfunny their material is.

Coppola's screenplay suffers from its overstuffed nature in many respects but the biggest victim of this flaw is the storyline involving Kelly Riker. She vanishes from the plot for prolonged periods of time while her entire subplot is a quintessential example of the anguish of women being reduced to just a plot device to motivate men. Her perspective or even a basic personality are eschewed entirely, she's only defined by the physical abuse she's suffered at the hands of her boyfriend. At least we get some unintentional amusement out of any instance of Rudy Baylor talking to Kelly Riker about her situation. Baylor immediately just saying "Just leave him!" five minutes into his first interaction with Riker seems to set up that Riker has found another toxic male figure, not a set up for a romance.

A subsequent scene where Riker talks about her sorrows only for Baylor to respond with "I don't wanna talk about that" had me cackling even while I realized this moment was emblematic of how little The Rainmaker actually cared about Riker as a character. Even if this was the only plotline in The Rainmaker, Coppola's shallow approach to an abusive relationship epitomizes the one-note approach The Rainmaker has with its characters. Everyone in the world of this movie is a broad archetype that would be too cartoony for your average episode of Dexter's Laboratory. Maniacal lawyers twirl their mustaches in public. A disturbed war veteran chills out in a car with his booze and cats. Bruiser practically has a glowing neon sign saying "Sleazebag" wrapped around his neck.

Every character is dialed up to eleven in The Rainmaker, everybody's a caricature. Coppola can never find humanity in any of these stylized people and that makes it hard to get dramatically invested in the endless assortment of plotlines Rainmaker has to offer. Further distancing the viewer from what's happening on-screen is the omnipresent narration from Baylor. Thorugh this voice-over work, Rainmaker clubs you over the head with what emotions the characters are experiencing. Baylor sitting next to a corpse in a shadow-draped room with a forlorn expression on his face isn't enough to convey that he's in a sad place. Baylor's narration has got to intrude on the proceedings by saying "I felt sad and lonely."

A star-studded cast does what they can with the roles they've been handed in The Rainmaker but few of them can really do much with this material. Poor Claire Danes is particularly stuck adrift in the thinly-sketched role of Kelly Riker. Only Danny DeVito finds an enjoyable groove as a charming scoundrel of a lawyer, one that sees him exuding an engaging sense of confidence whenever he strolls on-screen. Coppola's work behind the camera also isn't terrible on a visual level, The Rainmaker certainly looks polished enough. Yet, Coppola's directions to the actors has resulted in a number of incredibly broad performances that only exacerbate problems with the characters in Rainmaker's script. The Rainmaker has plotlines to spare but it comes up way short on humanity or interesting characters.
Posted by Douglas Laman (NerdInTheBasement) at 2:16 PM