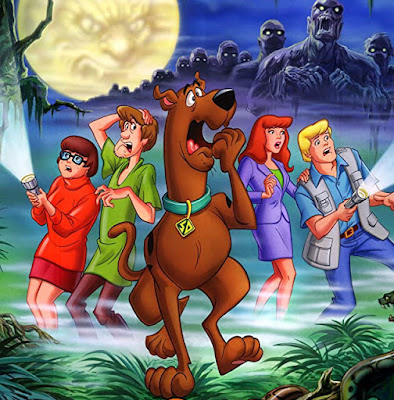 How exactly has Scooby-Doo existed for nearly 60 years? What has kept the Mystery Machine gang a constant presence in pop culture while fellow Hanna-Barbara creations like Magilla Gorilla languish in obscurity? Well, kids do love reliable routine and Scooby-Doo has provided that for generations of youngsters. However, I'd say a more critical part of why Scooby-Doo has consistently been a staple for kids is how it provides a safer version of horror.

For the most part, people enjoy a good scare. The same is true for kids. I mean, just look at the majority of children's literature (Brother's Grimm, R.L. Stine, etc.) for proof that youngsters enjoy getting frightened. However, kids like a specific type of horror. As Neil Gaiman once pointed out, kids don't mind being scared so long as whatever's scary ends up getting defeated in the end. Scooby-Doo certainly delivers that with its regular sight of a monster getting unmasked to reveal just a scheming groundskeeper.

Scooby-Doo managed to go even further with its promise of kid-friendly horror once the 1990s rolled around. This is the era when that hungry Great Dane joined the Land Before Time and animated Disney movie sequels in the world of direct-to-video kids movie sequels. Free of the constraints of broadcast television, Scooby-Doo now had the freedom to nudge its central premise into darker directions. The results were far from the Titans version of Scooby-Doo but they did take a handful of bold creative swings, including the incorporation of actual monsters into the world of Scooby-Doo.

Save for the occasional 13 Ghosts of Scooby-Doo, Scooby and friends always hunted down monsters that turned out to be people in disguise. However, with their first direct-to-video movie Scooby-Doo on Zombie Island, Scooby-Doo and company faced off against a gaggle of actual zombies. Shockingly, the villains of this production have some actual bite to them. Having Scooby face off against actual zombies who want to sacrifice the Mystery Machine gang for a blood moon sacrifice is a major step up in terms of adversaries from the days of dudes in rubber masks. Death has an actual presence in Zombie Island and it indicated that these direct-to-video movies had the chance to explore some more substantive material than proceeding Scooby-Doo outings.

Unfortunately, subsequent DTV Scooby-Doo outings were nowhere near as ambitious. In the years since Zombie Island, the world has been graced with at least one new feature-length Scooby-Doo movie hitting home video. If there's anything you can rely on in the wide world of cinema, it's DTV Scooby-Doo fare. Few of these countless titles ended up even doing the minimal amount of boldness seen in Zombie Island. Most, like Scooby-Doo and the Loch Ness Monster, opt for a more generic blend of forgettable humor and minimal menace. The tone of Zombie Island turned out to be an anomaly, not a trendsetter.

Still, growing up as a Scooby-Doo loving kid when these DTV movies began to flood the market, I was the prime audience for these films and I tended to watch them over and over again. Their lack of bolder storytelling urges didn't matter much to five-year-old me. Something like Scooby-Doo and the Cyberchase just riveted seven-year-old me (who was obsessed with the internet) by bringing together Scooby-Doo and the world wide web in one movie. Pure cinema heaven! With films like Cyberchase, that cowardly canine I'd enjoyed from television reruns became something I'd obsess over in feature film form.

Maybe that's how Scooby-Doo has managed to endure for so many decades. He's managed to get translated into basically every medium possible. TV, films (including this Friday's Scoob!), LEGO sets, you name a medium of children's entertainment, Scooby-Doo has probably done it. His forays into direct-to-video feature films never really lived up to the promise of Zombie Island. Yet they managed to provide entertainment to young Douglas Laman and still provide amusement for today's generation of youngsters. These DTV titles are certainly cash-grabs, but within them one can actually find the kind of safer horror, not to mention malleability, that has helped Scooby-Doo stick around for so long.
Posted by Douglas Laman (NerdInTheBasement) at 12:34 PM