What's Up, Doc? Is a Hysterical Tribute to Screwball Comedies 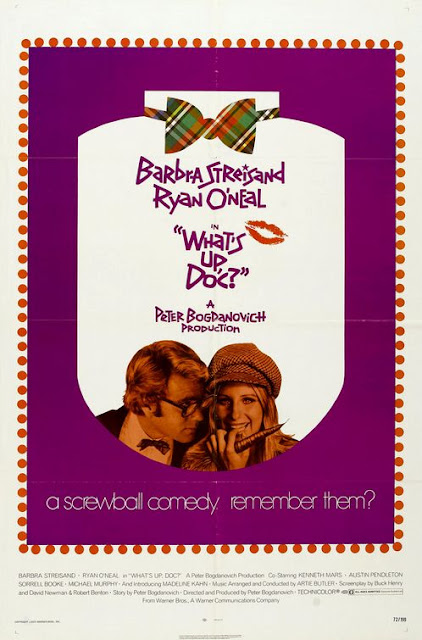 Filmmakers are versatile artists. Us film critics (and I'm as guilty of it as anybody) sometimes like to box in directors into a certain type. Martin Scorsese only does gangster movies, Richard Linklater only does slice-of-life indies, Akira Kurosawa only does jidaigeki pictures. In reality, these three filmmakers, and really any director, are usually capable of making far more than just one type of movie. You know who serves as a great example of the elasticity of a filmmaker? Director Peter Bogdanovich. Back in 1971, he did a relentlessly bleak portrait of a suffocating small town entitled The Last Picture Show. After such a grim motion picture, its no surprise he opted for something lighter for his directorial follow-up.


However, I doubt anyone walking out of The Last Picture Show could have predicted Bogdanovich would follow up Picture Show just one year later with What's Up, Doc?, a wacky screwball comedy that would have made both Bugs Bunny and Howard Hawks proud. The two leads of this wacky escapade couldn't be more total opposites if they tried. Howard Bannister (Ryan O'Neal) is a stiff awkward musicologist fixated on showing off what kind of music his ingenious rocks can create. While attending a conference, he keeps running into Judy Maxwell (Barbara Streisand), a scheming lady with a wit as quick as a bullet. She keeps interjecting herself into Bannister's life, including posing as his wife during an important dinner.

As if that wasn't confounding enough, Bannister carries his rocks around in a plaid bag that bears a striking resemblance to three other plaid bags belonging to and being pursued by a variety of different colorful characters. This being a screwball comedy, plenty of mix-ups ensue while traditional gender and societal norms get upended all the while. That latter element means Judy Maxwell is allowed to be an outright force of nature, a role that Barbara Steisand takes to with effortless grace. The whole cast of What's Up, Doc? equip themselves well to the specific rhythms of this type of comedy. Out of the entire group, though, it's Streisand who emerges as the standout for the best compliment one can offer a comedic performance: she's hysterical.

Streisand embodies the rapid-fire comedy and assured confidence of Bugs Bunny and translates that into a flesh-and-blood human being. Best of all, her performance would still register as immensely humorous even if you hadn't the faintest idea of the pop culture icon she's using as inspiration. Her dialogue deliveries are equal parts speedy and hilarious while it never gets old watching her boisterous nature clash directly against the flustered persona of Howard Bannister. Up to this point in her career, Streisand had primarily dabbled in musicals, but it turns out her real gift as an actor is in doing energetic confidence-soaked comedy.

Streisand's the best part of What's Up, Doc? but there's still plenty of other aspects of the production to praise. The screenplay, credited to four writers including Bogdanovich and Buck Henry, comes up with plenty of amusing gags that could only exist in a comedy this over-the-top. TV's get blown up, a myriad of plotlines keep bumping into each other and inadvertently risque wordplay abounds. There's also a gag involving a bag-poacher suddenly flying through a window that had me in stitches. Much of the comedy centers around the kind of wacky shenanigans that I tend to be a sucker for. Of course, it's hard to resist when such antics particularly are as creatively-executed as they are in What's Up, Doc?

Bogdanovich's direction handles all of this chaotic comedy nicely on a visual level. The fact that Bogdanovich constantly frames the mayhem of What's Up, Doc? in a visually cogent manner actually enhances the humor. The dissonance between the viewer being able to see everything clearly while the characters themselves are constantly confused about where their feet are instantaneously creates comedy. You wouldn't have expected it from the harrowing nature of The Last Picture Show but it turns out Peter Bogdanovich has got the chops to direct some top-notch screwball comedy. Huzzah for the artistic flexibility of directors, especially when it results in movies like What's Up, Doc?
Posted by Douglas Laman (NerdInTheBasement) at 11:15 AM