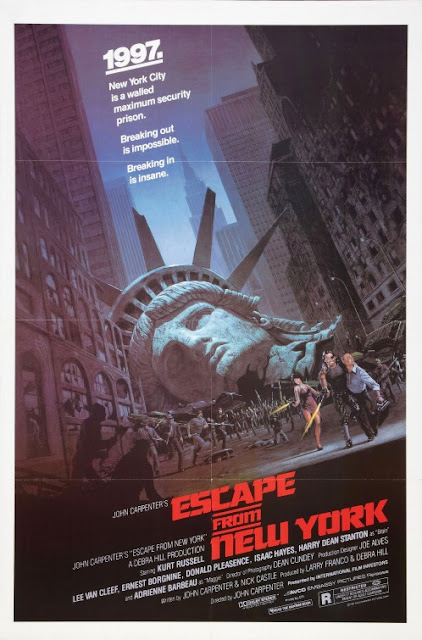 You gotta love it when movie poster taglines so succinctly sum up the premise of the film they're advertising. "Breaking out is impossible. Breaking in is insane." Yes, that'll do nicely for accurately summing up the stakes of John Carpenter's Escape from New York. This feature takes place in the then-far off time of 1997. All of America's most dangerous criminals have been contained in one expansive prison: New York City. Yes, the Big Apple is now rotten to the core as it's been converted into a place for criminals. You know who just landed in NYC? The President of the United States (Donald Pleasence). Air Force One crashed into New York and now the President has been taken hostage by somebody in NYC.


Sending in a task force will only result in the President meeting a gruesome demise. Time to call in somebody unorthodox for this mission. Luckily, Snake Plissken (Kurt Russell) just arrived at this prison. A legendary soldier, Plissken has the skills to get the President back and the U.S. military has put a bomb into his neck that'll ensure he doesn't get any wise ideas about abandoning the mission. The clock is ticking. 22 hours remain. Snake's going to have to do the impossible if he wants to survive. From there, Snak Plissken encounters a bevy of colorful characters, including Cabbie (Ernest Borgnine) and Brain (Harry Dean Stanton), on his path to the President.

Running just 99 minutes with credits, Escape from New York has a welcome sense of brevity. Writers John Carpenter and Nick Castle aren't looking to stretch this premise far beyond the breaking point and that means there's certainly an elegant simplicity to the proceedings. No strange narrative detours or pointless subplots to be found here. Escape from New York is a lean machine, though, admittedly, it isn't quite as top-notch as fellow Carpenter genre exercises from the 1980s. That doesn't make Escape from New York a bad movie at all but adhering to simplicity taketh away as much as it giveth away.  Compared to The Thing or They Live!, which both took their respective genres to wholly new places, Escape from New York is more like the best possible version of the familiar.

Still, not being as good as The Thing is something that can be applied to the majority of movies. On its own merits, Escape from New York offers plenty to enjoy. These pleasures include production design that realizes New York City with all sorts of visceral griminess. NYC as a prison truly looks like a place gone to hell and back, even sets set in broad daylight are still able to carry an ominous gaze. The fact that Castle and Carpenter are totally committed to rendering the denizens of the NYC prison as so delightfully absurd also proves ceaselessly entertaining. Everyone in this prison dresses like they're in some kind of mixture of Mad Max and a disco music video, it's wonderful.

Such over-the-top personalities prove to be a perfect fit for characters actors like Harry Dean Stanton and Ernest Borgnine. The latter performer, in particular, proves to be an endearing presence as a slimeball Cabbie in ceaseless awe over just being in the presence of Snake Plissken. Speaking of Snake, that character is brought to life by Kurt Russell in his first major action movie role. Previously well-known for his family-friendly Disney fare, Escape provided Russell with a chance to step outside of his comfort zone. It's an opportunity Russell absolutely runs with as he provides an action movie performance so assured and natural you'd think he'd been doing this for years.

Exuding a detached "too-cool-for-school" charisma from his first scene, Russell's grizzled performance is extremely entertaining, particularly when playing off against the over-the-top personalities inhabiting the NYC prison. It's also a nice touch that, while Plissken is a bad-ass to the core, he's also frequently getting beat up throughout Escape from New York. Despite his legendary reputation, he's not invincible, we actually get to see him get beat up and lose some fights throughout Escape from New York. These reminders of Plissken's vulnerability help lend some actual tension to the film, particularly in a nail-biter climax that see's the protagonists navigating land mines on a bridge.
Posted by Douglas Laman (NerdInTheBasement) at 10:23 AM