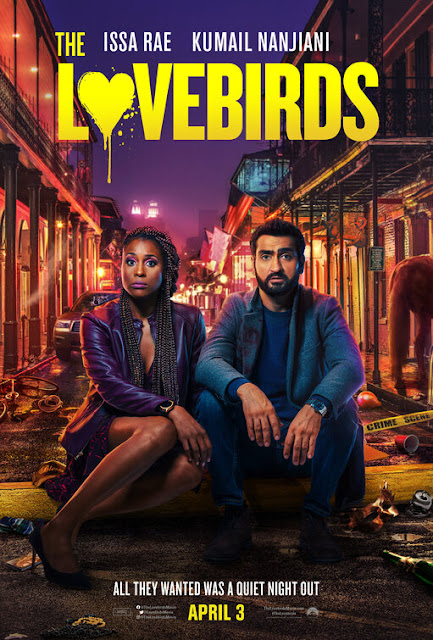 Jibran (Kumail Nanjiani) and Leilani (Issa Rae) used to have a love straight out of a romance novel. Now, they can't stand the sight of each other. While driving to a friends' party, they come to a realization: this is it. Their relationship is over. After five years together, Jibran and Leilani have reached their endpoint. Or at least, they thought they had. But they're gonna have to stick together a little while longer now that they've become embroiled in the murder of a bicycling stranger. A random guy just took the wheel of Leilani's car (with Leilani and Jibran inside) and just ran this dude over. Now worried they'll be credited with the murder, Jibran and Leilani set out to find out who's actually responsible for the murder.


There are a number of peculiar aspects to the underwhelming Lovebirds screenplay penned by Aaron Abrams and Brendan Gall. For one thing, a number of extended pop culture references feel distractingly out of date. Whose still making prolonged references to Mythbusters in 2020? Even more puzzling are recurring references to The Amazing Race, a show that was last relevant in maybe 2010. It's not like referencing The Masked Singer instead of The Amazing Race would have automatically made The Lovebirds a better movie. However, these dated references are emblematic of the stale humor and lazy writing that permeates most of The Lovebirds.

The absolute worst part about the script is just how disjointed it feels. The Lovebirds oscillates between two different types of scenes. The first is scenes where Jibran and Leilani spout clumsy dialogue to each other which makes it explicit what the other persons flaws are. Their lines in these sequences aren't all that funny or natural. Instead, they just sound like how a PR person would describe these characters in a press release. Then we have the other type of scene, where Jibrani and Leilani try to infiltrate underground crime locations, like a club or an apartment populated by frat boys, to discover who was responsible for that fateful murder.

Puzzlingly, these scenes rarely involve Jibrani and Leilani confronting any of their personal flaws. Despite spending so much time laying out their shortcomings, The Lovebirds totally forgets about those attributes of its protaganists. Whereas something like Game Night interwoven character conflicts into the crime movie narratives, The Lovebirds can't find any common ground between its disparate storytelling elements. As a result, the whole movie feels stitched together and the two lead characters never come alive as actual people. Worst of all, both of these types of scenes are low on laughs. Clumsy writing could be forgiven if the yuks were plentiful. Sadly, many scenes in The Lovebirds (including its predictable climax) see the script being too preoccupied with unnecessary expository dialogue to even bother trying to do something funny.

This shoddy screenwriting isn't aided by the equally lackluster direction by filmmaker Michael Showalter. Despite doing such great work with Kumail Nanjiani on the 2017 film The Big Sick, Showalter's work on The Lovebirds is frustratingly subpar. There are no real inventive visual gags in sight and there doesn't seem to be much thought put into how characters are blocked or arranged in any given shot. The Lovebirds is another classic example of improvised comedy dictating the filmmaking, which usually results in some really sloppy directing. Worst of all though is Showalter's handling of more intense scenes. An instance where Jibran gets into a tussle with a frat guy has such clumsy camerawork and editing that it reminded me of nothing more than Liam Neeson hopping a fence in Taken 3.

It's a true tragedy the script and directing make The Lovebirds such a forgettable comedy because the two lead actors deserve far better than this. An adorable scene where Leilani starts singing along to Katy Perry's Firework and Jibrani gradually joins on shows off endearing chemistry between The Lovebirds' two lead actors. After so much of The Lovebirds has been about shoving exposition down the viewer's throat, it's nice to just have a relaxed scene that can thrive on the rapport of Kumail Nanjiani and Issa Rae. These two really shine in this delightful scene that does have the adverse side effect of reinforcing just how lackluster the rest of Lovebirds is. Even talented actors like Nanjiani and Rae don't have enough charm to salvage a poorly-cobbled together comedy like The Lovebirds.
Posted by Douglas Laman (NerdInTheBasement) at 1:03 PM