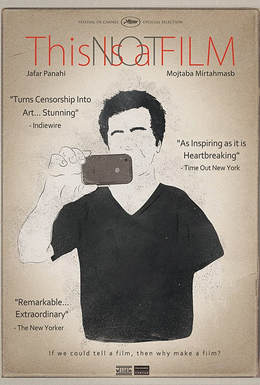 Rebellion comes in many forms.

Sometimes, a person's very existence is a form of rebellion. As I mentioned in my review of BPM (Beats per Minute), when a person is born as queer/a person of color/a woman, they're inherently viewed by larger society as inferior. Embracing the very traits that don't adhere to cishet white male norms while doing something as simple as walking down the street, that's rebellion. You're telling the world you will not be stopping. You will not cease being you even in the face of oppression. This is Not a Film is another vivid example of how subtle insurgency. In this case, the very artform of cinema as another form of quiet rebellion.

Filmmaker Jafar Panahi has been told he is not legally allowed to make any more movies. In response to Panahi's filmmaking efforts that challenged the Iranian government, Panahi has been arrested and given a twenty-year ban on ever directing movies again. In order to get after somebody who was speaking the truth, the government has effectively taped his mouth shut. This is Not a Film, directed by both Panahi and Mojtaba Mirtahmasb, chronicles a day in Panahi's life living at home, waiting for further information on the details of his sentence. All the while, he outlines scenes from a script that he can never make while reminiscing on events from his filmmaking career that take on extra meaning now.

You really don't know what you've got until it's gone. That's a sentiment everybody is grappling with now during the age of COVID-19 as the most mundane parts of everyday life are now gone. Similarly, Panahi is a man who always assumed he'd be making movies. A seen by scenes dedicated to Panahi outlining blocking for scenes in his unmade script, that process of crafting films is a massive part of his psyche now. He can't turn it off, this is who he is. Now deprived of it, Panahi becomes extra wistful over parts of an artform he previously would have thought as a nuisance. A disagreeable child actor rebelling against Panahi's wishes as a director, for example, now takes on new meaning as Panahi rebels his own authority figures.

Meanwhile, Panahi and friend Mirtahmasb are breaking the law through filming acts as simple as Panahi sitting on a couch. In the case of Jafar Panahi, the revolution is not televised, it is accomplished through filming mundane aspects of everyday life. In the process, Panahi and Mirtahmasb make a compelling case for the most basic virtues of filmmaking. Cinema, as a tool, can bring us closer to other people. As Roger Ebert once said in a speech, "Movies are a machine for empathy". It's been that way dating back to the earliest days of Alice Guy Blanche and the Lumiere Brothers. Such a tradition is carried on throughout This is Not a Film, which quietly reaffirms the beating human spirit that drives movies as an artform.

This is best exemplified by the last twenty or so minutes of This is Not a Film, which begins with Panahi and Mirtahmasb filming one another. For much of the film, Panahi has been the one being filmed. Now he gets to return to his place behind the camera with his iPhone camera. Through this humorous moment between friends, a number of important ideas become apparent. The tools of capturing others, of seeing the humanity in another person and of rebelling against corrupt government forces, they're all there in your pocket. Your phone now has the tools to fulfill the core tenets of filmmaking. In an age where High Flying Bird and Tangerine are now filmed entirely on phones, that's a theme that's become only extra relevant since This is Not a Film got released in 2012.

The beating human heart of filmmaking gets reinforced in This is Not a Film's final scene, which depicts Panahi making a spur-of-the-moment decision to follow a trash collector on his travels across an apartment building. As they ride an elevator together, Panahi uses his camera to capture this trash collector responding to a series of questions. Over the course of this sequence, both Panahi and the viewer get to know this trash collector significantly better. He's a college student who has worked odd jobs to pay for his education, he's got larger ambitions in life and people that he cares about. There's so much going on with this fellow. The closing scene of This is Not a Film provides visual proof of how many layers this guy has. The art of filmmaking has been used to remind the world how much depth there is in every person. As the government tries to silence Jafar Panahi, this filmmaker uses This is Not a Film as an opportunity to reaffirm the "controversial" humanity of his works. They can try to silence him but he will not stop doing what he was born to do.

Rebellion comes in many forms, including simply filming your conversation with the local trash collector.
Posted by Douglas Laman (NerdInTheBasement) at 11:13 AM