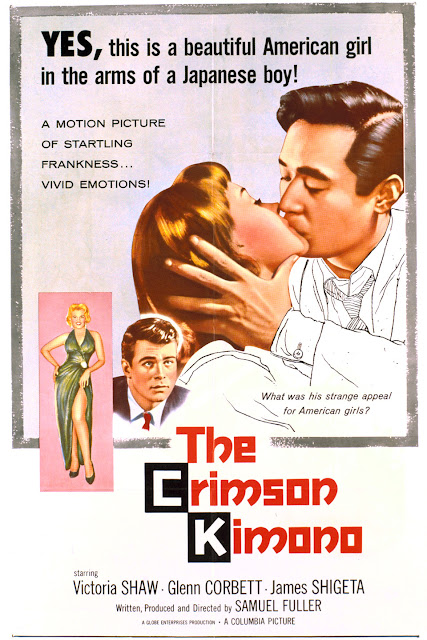 Judging solely by the poster for The Crimson Kimono, you'd be reasonable to assume this Samuel Fuller directorial effort will be using its Japanese lead character, Detective Joe Kojaku (James Shigeta), for exploitative means rather than actually exploring Kojaku as a human being. However, posters can be deceiving. Remember how that one guy with a skull tattoo on his face was plastered all over every 47 Ronin poster only for him to appear in the movie for ten seconds? Similarly, The Crimson Kimono has far more to offer than its poster suggests. Not only does it provide a far more layered portrait of a Japanese character than you'd expect in American cinema circa. 1959 but it's also just a well-made noir tale in its own right.

It's an intriguing detail that Fuller's story plops Kojaku into a film noir yarn. After all, this is a genre traditionally told with casts that are whiter than a Trump supporter eating mayonnaise in a blizzard. That's a good way to kick off any movie, upending traditional racial norms. Anywho, Kojaku is a detective whose always partnered up with fellow Korean War veteran Detective Sgt. Charlie Bancroft (Glenn Corbett). They're tasked with tracking down who could be responsible for shooting and killing a dancer known as Sugar Torch. While doing some digging, the duo find an assortment of geisha gear that points to Sugar Torch preparing to do an act utilizing elements of Japanese culture.

From there, the duo begins to individually investigate different parts of the case. Kojaku tries to track down a man who was helping Sugar Torch put together her new act while Bancroft interrogates Christine Downes (Victoria Shaw), an art student who painted a portrait of Sugar Torch. After they spend some time together, Bancroft begins to fall for Downes. Trouble is, it isn't long before Kojaku also swoons for Downes, who begins to have her heart set on Kojaku rather than Bancroft. This murder mystery noir eventually encompasses a love triangle. The tension of this conflict gets to have some real punch to it thanks to how successful Fuller's script has painted the friendship between Kojaku and Bancroft.

The duo has a lived-in rapport with one another that's well-realized in the natural rapport between lead actors James Shigeta and Glenn Corbett. It's immediately easy to buy that these two have known each other for years and endured thick and thin together. With such a dynamic firmly established, the subsequent love triangle gets to pulsate with actual danger. A long-time friendship dangles precariously over the tightrope of deceit Kojaku and Downes are delicately walking on. How thrilling! Even better, once conflict emerges between Kojaku and Bancroft over their shared lover for Downes, it's Kojaku that the audience follows. Bancroft isn't left without any depth but the central focus remains on Kojaku and his specific perspective.

In the middle of all this friendship turmoil is Victoria Shaw. Her character doesn't get as many levels of depth as Kojaku but she still serves the films' complex morality well. Such complexity is another trait that sets The Crimson Kimono apart from other film noirs. Though this feature shares a number of traits with classic film noirs, it does imbue more levels of gray into the proceedings than overwhelming bleakness that permeates the likes of Murder by Contract. Whereas many other noirs suggest that everyone is only ever out for themselves, The Crimson Kimono is plagued by people who are tormented by their obligations to others. Neither Kojaku nor Bancroft ever become straight-up villains when it comes to the affections of Downes. They're usually just as enamored with wondering what their best friend will say as they are with their own ambitions!

Meanwhile, The Crimson Kimono's cinematography and production design render certain sets in a more naturalistic style than you'd see in traditional film noirs. Classic noirs tend to turn even the most upbeat of environments into eerie landscapes. Think of how The Lady from Shanghai turned a carnival maze of funhouse mirrors into a terrifying backdrop for its climax. Meanwhile, The Crimson Kimono occupies environments that have a sense of normalcy to them, particularly in locations centered in Los Angeles' Little Tokyo district. Kojaku goes to temples, churches, kitchens, cemeteries and other places are shot, lit and presented like they would in a down-to-Earth drama. No expressionistic large shadows to be found here. That trait is one of the many ways The Crimson Kimono emerges as a unique and well-made film noir as well as just a good movie in any genre.
Posted by Douglas Laman (NerdInTheBasement) at 12:12 PM