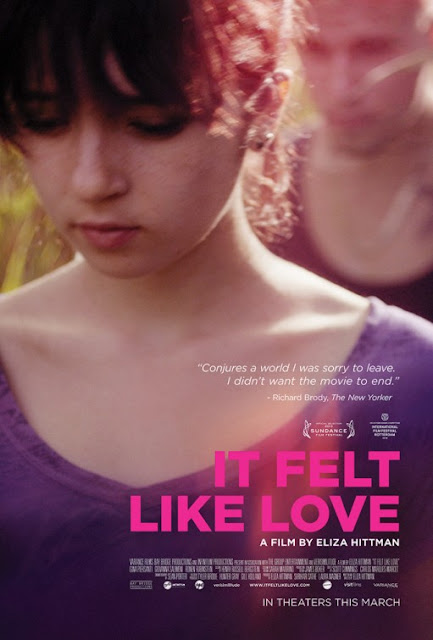 Lila (Gina Piersanti) really wants to be like her more experienced friend Chiara (Giovanni Salimeni). Chiara's got a steady boyfriend and has already had sex. In Lila's eyes, that's an easy ticket to adulthood and independence. Thus, she quickly strikes up a relationship with a much older guy named Patrick (Jesse Cordasco). It's all the start of Lila trying her best to change herself to fit her idea of what it means to be "adult". Her hair color changes, she brags about her fictional sexual exploits to anyone who will listen and she even begins to attend rowdy parties. In the process of changing herself so drastically, though, one has to wonder what will be left of Lila when this is all finished.


Eliza Hittman's screenplay and direction for It Felt Like Love conveys a sense of quiet tragedy. Hittman's portrayal of Lila changing herself to fit a perceived mold of adulthood doesn't reduce the character down to just being a vortex of misery. Instead, her writing grounds Lila's personal decision in relatable teenage experiences related to wanting to be seen as an adult. Speaking from experience, when you're fifteen or sixteen, you want to be taken seriously as a grown-up even while key aspects of adulthood remain difficult to grasp. It's an awkward age and Hittman's writing keeps that in mind while portraying Lila's actions throughout It Felt Like Love.

The realism of Hittman's writing really comes through in Lila's attempts to seem sexually experienced around Patrick and his adult friends. Lila's delivery of lines bragging about her sexual encounters is appropriately stiff, awkward. Though she wants to convey confidence, Lila's line deliveries only capture a vague impression of what a youngster might think sexual experience is like. This kind of pervasive uncoolness is felt in all of Lila's exploits in trying to be an adult. Whether it's a party or just talking about going to a party, Lila proves to constantly be out of her element. This personality and these actions fit her about as well as shoes that are two sizes too small.

Instead of conveying this attitude in a way that mocks Lila, Hittman's filmmaking consistently imbues the aforementioned quiet tragedy into how she frames Lila's struggles. To accentuate this somber atmosphere, Hittman's writing opts for a subdued approach. There's little in the way of elaborate monologues while her direction eschews flashy visual traits. This method does fine work in creating a grim atmosphere for Lila and the other characters to inhabit. Both awkwardness and sadness permeate the vast majority of It Felt Like Love, there's no comedic characters or tonal detours to alleviate the grimness.

This approaches only real drawback is that a number of the supporting characters in It Felt Like Love are rendered in such a muted fashion that it's hard to get invested in them as people. This makes sense for Patrick and his friends, who are only supposed to represent abstract concepts of objects that entice Lila to embrace adulthood much too early. More dimensions to characters that prove deeply personal to Lila, like Chiara and her father, though, would have helped to make the world of It Felt Like Love even more rooted in reality. Just because your movie is realistic doesn't mean supporting characters aren't allowed to have distinct personalities.

Meanwhile, Hittman's camerawork proves to be a great way to explore the perspective of Lila. The position of the camera frequently either replicates the point-of-view of Lila or centers Lila in the frame. Through this maneuver, our attention is entirely focused on It Felt Like Love's central character. It also means that all eyes are on the lead performance of Gina Piersanti whose acting contributes heavily to how haunting It Felt Like Love is. Not only does Piersanti capture the awkwardness of Lila, but her facial expressions alone convey so much of the characters' internal torment. Her work in It Felt Like Love isn't always easy to watch but it helps explain why Eliza Hittman's directorial debut is so gripping.
Posted by Douglas Laman (NerdInTheBasement) at 2:00 PM