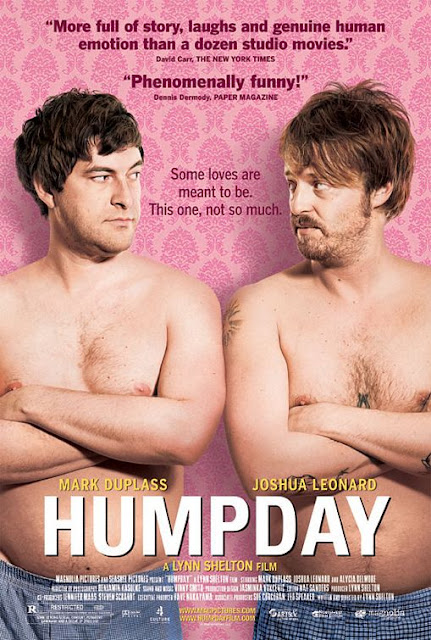 For much of the history of American comedies, gay panic jokes were as standard of a source of comedy as sleeping on a banana peel. Just because they were ubiquitous doesn't mean they weren't harmful or unfunny. The rampant presence of gay panic jokes no doubt contributed to pop culture broader issue of normalizing the dehumanization and mockery of queer individuals, particularly between men. Throughout the history of cinema, though, plenty of great classic comedies have managed to generate yuks without restoring to a cheap trick like gay panic gags. Among such comedies was Humpday, Lynn Shelton's second directorial effort that, on paper, seems like it could have gone down a much more mocking path.

After all, though Humpday was released in July 2009, comedies were still frequently going to the gay panic well for humor. Humpday was released in the same summer as the "Paging Dr. Fa**ot" joke from The Hangover for crying out loud! But Humpday chooses to take its premise and go in a much more thoughtful and openly vulnerable place with it. Said premise concerns the reunion of college buddies Ben (Mark Duplass) and Andrew (Joshua Leonard). In the years since they left college, Ben has gotten married to Anna (Alycia Delmore), settled into a house and is even planning a family. Meanwhile, Andrew is still just traveling across the globe without much of a plan for his future.

One night, Andrew coerces Ben to come with him to a party full of other artsy-types. Though Ben plans to stay only briefly, Andrew ends up staying until 2:00 AM. During that time, Ben and Andrew get wasted and commit to a project for a local pornographic film festival. The two of them will film themselves having sex. What could be more transgressive than two straight dudes having sex? Shelton's script for Humpday already indicates that it's approaching its central topic in a more unique direction by the way Andrew and Ben react to this prospect. Instead of immediately recoiling in horror, the idea of two men having sex isn't a foreign or revolting concept for either one of them. The presence of multiple queer characters in the supporting cast further reinforces how Humpday's story isn't about making a mockery of same-sex intimacy.

Instead, Shelton's script is about diving into how the prospect of committing to this porn film reflect individual struggles for both Ben and Andrew. Ben may look like the ultimate suburban husband on the outside but he's struggling with the idea of fully committing to a family. Whereas Ben wants a break from responsibilities, Andrew, meanwhile, see's this movie as his chance to finally finish something. Though coming at it from opposite angles, Ben and Andrew are united in how this video means much more than sex or even winning a competition for each of them. Shelton's writing deftly develops both of these lead characters in a manner that lends such authentic dimensions to both Ben and Andrew.

The layered writing of Lynn Shelton also means Anna gets far more to do than wife characters usually do in male-led comedies. Instead of being reduced to simply a stereotypical "nag", Anna is her own fully-formed person with a perspective that's allowed to ebb and flow as she becomes more aware of what kind of project Andrew and Ben are working on together. Best of all in Shelton's writing are scenes where the two lead male characters are allowed to just be openly vulnerable. It's the kind of emotional intimacy gay panic jokes inherently ridicule but that an exceptional movie like Humpday uses to make its characters all the more richly detailed. A scene where Ben opens up about an earlier sense of sexual attraction he felt towards a man is especially well-written and lends a welcome sense of complexity to Humpday's approach to human sexuality.

Lynn Shelton also directs Humpday. Armed with 35 mm film and a Panasonic AG-HVX200 camera, Humpday is filmed in a manner that's meant to lend a grounded nature to the proceedings. There's intentionally little in the way of big grand camerawork flourishes, no elaborate crane shots, or anything of the sort. Instead, the stripped-down camerawork reinforces the raw nature of the story itself. Humpday is a tale where people's emotions and inner desires are laid bare and Shelton's direction has an unvarnished quality that matches the storyline perfectly. This type of filmmaking becomes especially welcome during the home stretch of Humpday where Ben and Andrew actually head out to a hotel room to film themselves doing it.

Restricted just to a hotel room with these two characters trying to figure out how to begin this lewd film, Shelton's camerawork becomes the perfect garnish to accentuate the awkward comedy of this sequence. Her direction and Benjamin Kasulke's cinematography are as stripped-down as Ben and Andrew, there's nothing else in the frame to distract from the unrelated rapport between the protagonists.  This sequence isn't just a showcase for Shelton's directing. It's also a great demonstration for how well lead actors Mark Duplass and Joshua Leonard can capture authentically imperfect human interactions. Thorugh their performances as well as Shelton's work as a writer & director, Humpday shows lazy comedies resorting to gay panic jokes on how to make an actually effective comedy.
Posted by Douglas Laman (NerdInTheBasement) at 3:53 PM