Scoob! Has Easter Eggs A-Plenty But Little Else to Offer 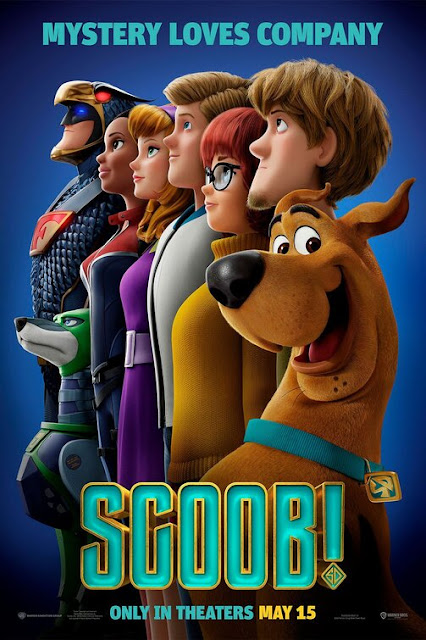 Have you ever wondered about the origins behind the friendship between Scooby-Doo and Shaggy? Never? Well, Scoob!, a brand new feature-length animated Scooby-Doo movie available on premium video-on-demand (it was once set for a theatrical release), is here to tell it anyway. A prologue sequence shows stray pup Scooby and lonely kid Shaggy uniting on Halloween. That night, they also meet Fred, Velma and Daphine. These five don't just cross paths that fateful night, they also take down a monster who turns out to be a man in a rubber mask. From there, this group is inseparable as they spend the next thirteen years off against a whole slew of monsters.


In the modern-day world, Shaggy (Will Forte) and Scooby (Frank Welker) feel like disposable parts of the Mystery Inc. gang. Fred (Zac Efron), Daphine (Amanda Seyfried) and Velma (Gina Rodriguez) each have their own role to play but what do two scaredy-cats like Shaggy and Scooby bring to the table? Well, it turns out they might be destined for something bigger. Scheming evildoer Dick Dastardly (Jason Isaacs) is after Scooby as part of some nefarious plan. Superhero Blue Falcon (Mark Wahlberg) has recruited Scooby and Shaggy to help him and his teammates track down ancient dog skulls before Dick Dastardly finds them first. Along the way, Scooby and Shaggy's friendship gets tested as Scooby's becomes super important in the mission while Shaggy turns out to be disposable to Dastardly's larger mission.

It's never a great sign when the best gags in your movie are the background easter eggs. As a lifelong fan of Hanna-Barbera cartoons, it's undeniably fun to see Scoob! place little references to other Hanna-Barbera productions all during its runtime. Mr. Peeble's Pet Shop, Squiddily-Diddily, and even a poster for the Hex Girls all show up at various points throughout Scoob! A location being named Messick Mountain even registers as a genuinely touching tribute to Scooby-Doo's original voice actor. But the momentary thrill of seeing Space Ghost and The Banana Splits referenced in a video game arcade quickly fades. Once that's gone, what else does Scoob! have? Turns out, not a whole lot. Scoob! has an obvious affection for its source material. But director Tony Cervone struggles to translate that affection into anything more substantive than narrowly-appealing background gags.

That isn't to say Scoob!'s script (credited to a quartet of writers including Adam Sztykiel) isn't without its charms. Some casually absurdist gags, like a police officer being unable to arrest a dog with a middle name, inspire chuckles. The screenplay's best aspect is that it just allows new weird things to show rather than pause the proceedings for prolonged explanations as to why these things are like they. Blue Falcon, for instance, comes into the story simply as a superhero, there's no sequence dedicated to justifying why superheroes can exist in this world. They just can, ditto for prehistoric beings, robots and mustache-twirling baddies.  Scoob! occupies an exceedingly cartoony world. Its script embraces that by allowing strange new beings to just waltz in and out of the story at any time.

Conversely, Scoob!'s writing struggles with creating actually humorous comedy. Too many jokes here rely on references to the very existence of Tinder, selfie filters, or the phrase "hangry" rather than actual punchlines or original visual gags. Meanwhile, the plot for Scoob!, a movie that prides itself on cartoon zaniness, is highly formulaic. The story itself is reliant on a series of disposable MacGuffins, a villain with an army of lookalike henchman and all sorts of other plot details that will be familiar even to the youngest viewer. Even worse are the moments where Scoob! actually wants to take its characters seriously. Anytime Scoob! engages in attempts at poignancy, the movie comes off like a kid who hurriedly scribbling off the homework of PIXAR movies or Spider-Man: Into the Spider-Verse.

Scoob!'s emotional moments are obligatory rather than authentically moving. Part of me wonders if characters like Scooby-Doo or Shaggy just can't sustain anything more substantive than a half-hour cartoon comedy. Then again, if Spider-Man Noir could make me tear up, then any animated family movie character can be poignant provided that the writing is up to scratch. Unfortunately, Scoob! is going through the motions in its screenwriting. The voice cast is similarly perfunctory save for Jason Isaacs doing a delightful scenery-chewing turn as Dick Dastardly. Between this performance and his work on that Dark Crystal TV show last year, let's give Isaacs more voicework, please. Otherwise, most of the cast is content to just do vague impressions of familiar characters without lending actual personality or conviction to their roles.

Will Forte especially struggles to make his Shaggy sound like anything other than Will Forte doing a Shaggy impersonation. More successful is the computer-animation done by Reel FX. This animation house has clearly made leaps and bounds in progress since their work on films like Rock Dog and Free Birds. Though certain textures like hair and water still look subpar, much of the film actually looks solid, particularly when it comes to translating hand-drawn characters into computer-animation designs. Though the animation is solid, it's used at the behest of screenwriting and direction that struggles to either amuse or move you. Scoob! is painless in some respects compared to other computer-animated kids fare (bathroom humor is kept to a minimum, thank God) and it's better than the last two theatrically-released Scooby-Doo movies. Still, Scoob!'s whirlwind pace and boatload of Hanna-Barbera Easter Eggs end up being surface-level distractions from just how thinly-sketched this whole production is.
Posted by Douglas Laman (NerdInTheBasement) at 11:23 AM

Email ThisBlogThis!Share to TwitterShare to FacebookShare to Pinterest
Labels: 2020, May 2020, Movie Review, Scoob!