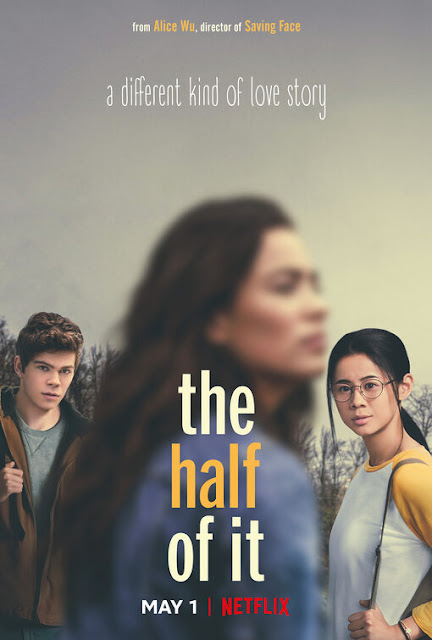 The Half of It takes place in the fictitious American town of Squahamish. We don't get told what state it occupies or even what region of America it's located in. That turns out to be a positive thing. Writer/director Alice Wu could have imbued Squahamish in specific stereotypes (thick Southern accents, specific regional foods, etc.) that would have allowed viewers to minimize the darker aspects of Squahamish. Instead, the way Squahamish makes LGBTQIA+ youth feel petrified of embracing themselves or making women feel like they only have the option of being a wife cannot be dismissed as just "a Texas thing" or just "an Arkansas thing". This town could be anywhere just like how societal structures that hurt marginalized communities can appear anywhere.


That's an immensely thoughtful detail as well as a surprising one. Wu's screenplay is rich in such details. The town of Squahamish serves as the backdrop for the story of Ellie Chu (Leah Lewis), a seventeen-year-old High School student who carves out a mostly lonely life. She spends her days writing essays for her fellow students in exchange for cash and watching old movies with her father, Edwin Chu (Collin Chou). Ellie's talent for writing gets the attention of Paul (Daniel Diemer), who wants Ellie to help pen a letter to his crush, Aster Flores (Alexxis Lemire). Needing money to pay for her house's electricity bill, Ellie takes on the assignment.

Ellie is certainly a wordsmith and is able to conjure up letters and texts that catch the attention of Aster. However, there's a catch in this scenario, one that Paul is totally unaware of. Ellie also harbors romantic feelings for Aster. In a welcome departure from many teenage LGBTQIA+ stories, Ellie's personal conflicts don't revolve around her accepting her sexuality. Though she resides in an old-fashioned town that condemns the very notion of homosexuality, the idea that she resides somewhere in the LGBTQIA+ community doesn't register as a shocking concept to Ellie. This means The Half of It is able to create internal conflicts for Ellie stemming from more specific circumstances, like how she's trying to help a guy hook up with her crush.

Similarly inventive and unique are the ways Alice Wu depicts texts between Ellie and Aster. Films have frequently struggled to figure out how to represent this now commonplace form of communication in a cinematic format. The Half of It decides to tackle this conversational approach in differing ways throughout the runtime. An early poignant scene has Ellie and Aster reading aloud their texts to each in voice-over. Though they're in separate locations, this method makes it seem like Ellie and Aster are having a face-to-face conversation with one another. Without Aster realizing it, they're bonding together. A later scene involving Paul and Aster on a date sees a text conversation between Aster and Ellie posing as Paul occupying vacant space on the left-half side of the frame.

Across this pair of sequences, Wu demonstrates both a sense of visual versatility and a knack for translating text chats into a dynamic cinematic form. Similarly inspired are the scenes in The Half of It where characters truly bond. People in Squahamish, like Paul or popular rock Trig (Wolfgang Novogratz), believe that the only way to properly express romantic affection is through grandiose gestures that tend to glorify the guy and leave the woman as a detached object. The Half of It quietly counters that the best way to connect with someone is in more quiet moments where both parties can be treated like people. A scene where Aster and Ellie just chill together in an isolated hot spring is a perfect example of this. Two people, constantly struggling to fit into social norms, allowed to let their guards down around each other. Open vulnerability, quiet human connection, soft music playing in the background, it doesn't get more romantic than that.

This scene also gets great mileage out of The Half of It's knack for creating memorable pieces of dialogue that so effectively reflect the personalities of these characters. Ellie's declaration that she wears "a Russian nesting doll of clothing" is both humorous in its own right as well as a great microcosm of her personal fashion sense. Similarly, the contrasts between Ellie's thoughtful meditations on romance and Paul's more unpolished style of speaking when he's talking to Aster help reinforce the wildly different personalities of these two characters in addition to being entertaining. Alice Wu providing such lovingly-crafted & detailed characters in her screenplay while her directorial style compliments the warm-hearted nature of the script.

Wu's camera captures shots of Ellie in her room or on her bike with such vibrant empathy, though it's her camerawork in shots depicting Aster and Ellie where she really shines. There's a scene where Ellie is washing her hands in the bathroom only to have Aster walk in and, while waiting for her friends, lean on the bathroom wall. While never cutting to a new shot, Wu's camera keeps shifting its focus from Ellie to Aster. Though they never speak a word to each other, the camerawork here says so much about Ellie's quiet longing and Aster's discomfort with her current social circle. That's the kind of expertful filmmaking that makes The Half of It something special. Romantic movies are a dime-a-dozen. Romantic movies like The Half of It that combine such poignant longing with the central theme of The Lonely Island's Spring Break Anthem, those are far rarer and should be cherished.
Posted by Douglas Laman (NerdInTheBasement) at 12:51 PM