Kiera Knightley Goes in a Different Direction For The Endearing Laggies 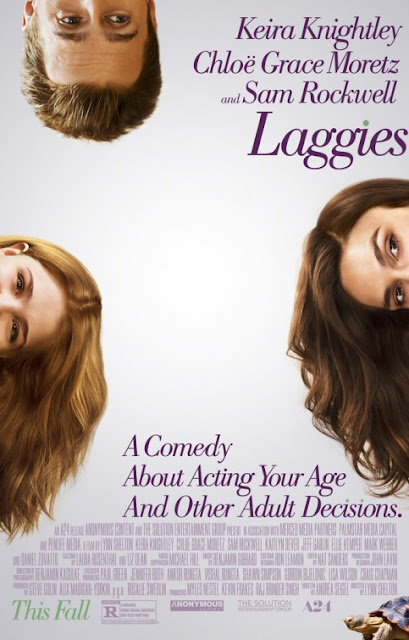 In the year 2014, you could see many unique sights on the big screen. A gun-toting raccoon with the voice of Bradley Cooper made his first foray onto the big screen. Rosamund Pike stabbed Neil Patrick Harris in the genitals. Tom Cruise got run over by a truck while trying to save the world. But perhaps the most unexpected and unusual sight of all came in the indie feature Laggies. Said sight was seeing Kiera Knightley not only in a movie set in the modern world but also playing a lady residing in Seattle, Washington! The queen of British period pieces traveling across the pond to play a struggling twenty-something, what a concept!

Knightley plays Megan, a woman having a difficult time finding her place in this world. She's still hanging out with her High School friends and is even still in a romantic relationship with her High School crush. The prospect of actually going out there and confronting the world is far too daunting, as is her boyfriend's sudden marriage proposal. Looking to evade the crushing specter of adulthood, Megan ends up befriending High Schooler Annika (Chloe Grace Moretz) and her friends. Annika and Megan become good enough friends for Annika to invite Megan to stay over at her Dad's house. Annika's dad, Craig (Sam Rockwell), is perplexed by this living situation but Megan insists she only needs a week before she gets back on her feet.

Over that week, Megan conceals the truth, especially anything related to her boyfriend, from Annika and Craig while she navigates who exactly she wants to be. Andrea Seigel's screenplay for Laggies is a charming creation but far from a flawless one. For one thing, Seigel does have a tendency to lay out character motivations too overtly in dialogue. During a mid-movie High School party, Megan comes right out and says that she has trouble stating what she wants in the face of their people's expectations. Not only does the line feel out-of-character for Megan, a person who avoids facing up to her own issues, but the clumsily way its written doesn't make it sound like something a person would say.

Meanwhile, the ending to Laggies isn't wholly satisfying, it just feels too tidy considering everything that preceded it. The parts where Laggies flirts with examining the darkness of Megan's state of arrested development are so interesting that this more chipper conclusion can't help but underwhelmed. On the other hand, Siegel is extremely good at creating distinct personalities even among supporting players without distracting from Megan's storyline. A third act scene where Megan, Annika and Annika's friends provide a great demonstration of this as a multitude of different perspectives clash into one another. I was thoroughly impressed to discover how distinctly-rendered each of these characters had become over the last seventy minutes without me even realizing it!

Siegel's more nuanced approach to the plight of Megan and supporting players like Craig helps to make sure Laggies is more than just another American indie movie about a struggling twenty-something. Meanwhile, directing Siegel's script is Lynn Shelton. Much like with her 2009 feature Humpday, Shelton lends a deeply empathetic lens to the struggles of the characters of Laggies. Her gaze is one that isn't afraid to capture these characters in imperfect moments. Whether it's Craig being a goofball when talking to a boy that Annika is hanging out with or Megan in her most downtrodden moments, Shelton's direction lends authenticity to these relatably imperfect people.

Shelton's visual aesthetic for Laggies is solid, though for some reason the movie always looked like a Netflix movie to me. That's neither inherently a criticism or a compliment, but something about the combination of lighting, the 1.85: 1 aspect ratio and the types of shots used kept evoking movies you'd find on that streaming service. Though Laggies doesn't reinvent the wheel on a visual level, Shelton's direction does get some memorable performances out of the cast she's assembled. This includes Kiera Knightley, who equips herself quite well to this messy role. Knightley's been mostly known for dark and dramatic performances but it turns out she can do comedy and endearing awkwardness quite well! Maybe they can incorporate those qualities in Knightley's performance in the inevitable sequel 2 Collateral 2 Beauty.
Posted by Douglas Laman (NerdInTheBasement) at 11:50 AM