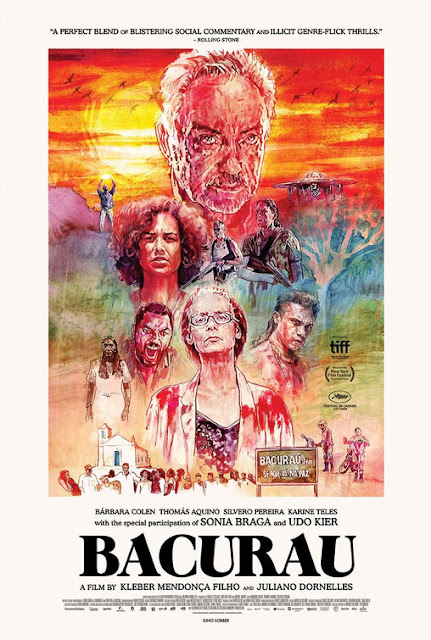 There is so much confidence surging through the bloodstream of Bacurau. There are countless moments I could reference to demonstrate the immense level of confidence found in the new film from the directorial duo of Kleber Mendonca Filho and Juliano Dornelles. However, my personal favorite has to be the sudden appearance of a UFO around the half-hour mark of Bacurau. Up to now, there hasn't even been a hint of science-fiction material in Bacurau and they provide no explanation for where this UFO came from. Filho and Dornelles (who also penned the screenplay) trust the audience enough to not need an explanation that would undercut the sense of uncertainty this memorable image is trying to convey.


That level of confidence and faith in the viewer is found all throughout Bacurau. The title refers to a small town located in Brazil's backcountry. Though it isn't the fanciest place to live, Bacurau is home to a number of colorful characters who happily call this place their home. The town is now short of one resident now that Teresa's (Barbara Colen) elderly grandmother has passed away. Her funeral, which is attended by everybody in town, serves as a great backdrop for the opening scene of Bacarau. Through this social gathering, we get a sense of the distinct personalities belonging to each of the town's inhabitants, like doctor Domingas (Sonia Braga), as well as their dynamics with one another.

From there, we follow the residents of Bacurau as they try, in the wake of this loss, to carry out their normal day-to-day routine. We also learn that a key reason for everybody being so tightly-knit is that they're basically on their own out here. Considering the behavior of the Mayor, Tony Jr. (Thardelly Lima), particularly his lack of interest in opening up a much-needed dam, the denizens of Bacurau have only got each other to turn to in times of peril. Tony Jr.'s callous behavior towards the lead characters (which also includes dropping off boxes of dangerous drugs) is the beginning of Bacurau's impressively-realized social commentary. This is a movie with a fire in its belly, it recognizes the injustices of the world and wants to take them on all in the name of vouching for the downtrodden.

This critical aspect of Bacurau's screenplay becomes even more apparent once the actual enemies of the movie emerge. The people who are responsible for strange happenings like no local cell phone service and a smattering of nearby murders are a group of American soldiers led by Michael (Udo Kier). Considering the long history of American forces having an adverse effect on Brazillian affairs, this immediately roots Bacurau in something real. The same can be said for how Bacurau defines the American characters as adversaries. What we have here are a gaggle of individuals who (among other pieces of nastiness) happily talk about their childhood experiences with guns, who take pride in the Whiteness of their skin and who eventually end up opening fire on a school.

There's even a clever moment where one of the soldiers, after having no trouble with gruesomely killing people, is grossed out that one of their targets is fully naked, a comment on America's double-standards regarding violence and nudity. Bacurau isn't just taking issue with how America has impacted Brazil. Through Michael and his crew, the film provides living embodiments of the worst traits of America itself. Such characters are rendered as broad caricatures who can serve as a distinct contrast to the more nuanced residents of Bacurau. In addition to providing a unique piece of social commentary, Bacurau's approach to its villains also creates a compelling protagonist/antagonist dynamic.

Such a dynamic informs a number of suspenseful scenes as the lead characters try to navigate what could be happening to their town. Filho and Dornelles' filmmaking is at its very best when it's time for scenes designed to make you hold your breath. An early confrontation between two Bacurau residents and two gun-wielding motorbike riders establishes the sort of ultra-intense showdown sequences that the film makes regular use from there. These scenes also work in large part due to the editing of Eduardo Serrano. His precise timing of when to cut from one shot to the next is a large reason why these unpredictable sequences work as well as they do. Serrano's work is especially noteworthy in a third act scene involving a child's nighttime game. His editing provides a quiet sense of unease to this scene that sees childhood joy turning into tragedy.

The social commentary, the directing and the editing are all exceptional in Bacurau. Yet what really stood out for me were the characters. Filho and Dornelles' screenplay takes great pains to make the residents of the titular location such lived-in people. An elderly guitar-wielding man, a boisterous DJ, the incredibly riveting fighter Lunga (brought to life through a star-making turn by Silvero Pereira), they all manage to leave an impact. A child early on jokes that residents of Bacurau are referred to as "people" and the movie itself takes the same approach. These characters help Bacurau to evoke the likes of Lady Bird and Do the Right Thing in creating a world where each richly-drawn inhabitant could sustain their own movie!

Also standing out is Bacurau's gripping climax. Silence and heavily empty frames are put to great use here in informing the suspense. This finale also turns out to be an ingenious inversion of the traditional climax of a Western movie. We get a classical showdown at High Noon in a small rustic town. However, now the conventional Western protagonist (the gun-toting white male cowboy) is the enemy. The protagonists the audience is supposed to cheer on are people who would have been reduced to background caricatures (if they even appeared at all) in classic Westerns. A mixture of both thoughtfulness and entertainment, this home stretch of Bacurau embodies the very best traits of this entire movie, including that unforgettable confidence.

Bacurau is currently only available through virtual screenings. 50% of the proceeds of these screenings will go to independent movie theaters. Click here for more information.
Posted by Douglas Laman (NerdInTheBasement) at 1:16 PM