Harakiri Is a Jidaigeki Tale That's All Too Relevant In 2020 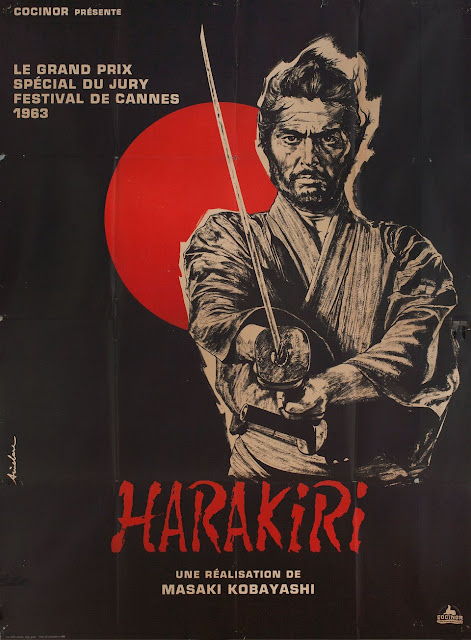 I went into Harakiri knowing nothing about it. I did know it hailed from Kwaidan director Masaki Kobayashi, which was extremely exciting considering how hard Kwaidan slaps. I was also aware that the title is a reference to the practice of seppuku as well as the fact that the film itself belonged to the Jidaigeki genre. Beyond those surface-level details, though, I went into Harakiri blind. That turned out to be for the best. As I soon learned, Harakiri's story inhabits a world where surprising new layers of nuance are always lurking around the corner. That isn't to say Harakiri requires the element of surprise to work as a satisfying movie, heavens no. But going in dark does enhance the incredible experience writer Shinobu Hashimoto and director Masaka Kobayashi have created here.


Harakiri begins simply enough. In the year 1630 in the city of Edo (which would eventually be called Tokyo), Tsugumo Hanshiro (Tatsuya Nakadai) has arrived on the footsteps of a palace belonging to the Li Clan. Hanshiro has a simple request. As a ronin, he now wishes to commit the act of Harakiri in the courtyard of this building. A senior counselor for the clan, Saito Kageyu (Rentaro Mikuni), is dubious of this request. As he explains to Hanshiro, there has been a recent surge of samurai requesting to engage in the act of Harakiri just so they can receive, in exchange for not killing themselves, food, water and shelter. In order to explain this phenomenon, Kageyu proceeds to tell Hanshiro of a story regarding a soldier who belonged to the same clan as Hanshiro.

That soldier was Chijiwa Motome (Akira Ishihama). In the context of the story, Motome is depicted as a foolish figure, a living embodiment of some wayward samurai putting on the act of wanting to perform Harakiri just so he can receive a handout. To teach him a lesson, Kageyu and his superiors decide to grant Motome permission to perform his Harakiri ceremony here in the Li Clan palace. The terrified Motome is forced to slice open his chest with only a bamboo sword. That particular item is what the Li Clan members see as the ultimate signifier of Motome's failure as a samurai, he doesn't even have a real sword! They encourage this man to kill himself and Motome, after an immense struggle, reluctantly obliges.

Once Kageyu is finished with this story, the solemn Hanshiro still wants to go through his Harakiri ceremony. At this point, I had no clue where Harakiri was going but I was enthralled. Just the performance from Tatsuya Nakadai alone had me glued to the screen, he commands such authentic weariness in his performance. You can feel the weight of some undefined past weighing down his bones even when he's just sitting and listening to Kageyu's story. Nakadai's performance only becomes more compelling as Hashimoto's screenplay soon reveals new layers to the world it's established. Such a revelation emerges once Hanshiro, at the start of his Harakiri ceremony, announces what man he wants to be responsible for beheading him.

He proceeds to name three absent Li Clan members who were particularly responsible for all the anguish caused towards Motome. Hanshiro may be grim but he's also cunning. He's been brewing a plot all along that connects to the demise of Motome. Hanshiro proceeds to tell a story that lends more complexity to the world the Li Clan denizens inhabits. Motome wasn't just some cowardly fellow, he and Hanshiro were former samurai struggling for work. To boot, Motome was married to Hanshiro's daughter and was expecting a child. They needed money to survive. In order to provide for his family, Motome set out to do whatever he could to get food and money. This ended up including a plan to try and procure goods from the Li Clan, which resulted in Motome's demise.

Upon learning of Motome's death from three uncaring members of the Li Clan, Hanshiro discovers Motome's bamboo swords. He collapses to the ground in a fit of sorrow and realizes that Motome sold the iron in his swords to provide money for his family. "I'm so selfish!" Hanshiro cries "I never even would have thought of that!" What the Li Clan saw as a betrayal of honor and tradition was a noble gesture on the part of Motome to provide for the ones he loved. Similarly, his not-serious Harakiri proposal wasn't an attempt to be "lazy". It was the maneuver of a desperate man who saw no other way to procure essential items for his wife and child. The Li Clan, with their immense level of influence and lavish compound, can hold onto a black-and-white view of the world that assumes the worst of the poor and those who deviate from tradition.

Meanwhile, for those who exist in the real world like Motome and Hanshiro, existence is a far more complicated manner rife with gray areas. This central thesis of Hashimoto's screenplay for Harakiri is already plenty thoughtful in its own right. Yet the masterful way it's gradually revealed over the course of the movie makes an already remarkable story all the more engaging. There's such thoughtful consideration to where each new flashback (particularly the aforementioned scene depicting Hanshiro breaking down after seeing Motome's corpse) and piece of information comes into the story. This is not a film just randomly dropping twists in hopes that instant shock value can compensate for a lack of depth. Hashimoto has such preciseness in when and how he reveals a new layer of depth to Hanshiro's tragic story.

As if it couldn't get any better, Harakiri boldly ends its story on a grim note suggesting that the powerful forces dehumanizing the poor and deifying the rich will continue on. Without explicitly saying so, Harakiri is closing out this period piece in a way that asks the viewer to look around and realize that this process still goes on in the modern world. It's a message that still resonates as all too relevant nearly sixty years after its initial theatrical release. We still engage in widespread practices of shaming poor people for having fridges and microwaves while making a billionaire with contempt for the poor like Elon Musk some kind of hero for no good reason. What's old is new again and the systemic forces that demonized Motome and Hanshiro in 1630 still persist in 2020.

This thoughtful story is brought to life through excellent direction from Masaki Kobayashi. There's plenty to praise in his work behind the camera on Harakiri, particularly his use of contrasting colors in a black-and-white movie. The dark color of blood, for example, is used as a fitting contrast to the pale white colors adorning every inch of the Li Clan Palace. Every inch of this place is supposed to convey a pristine look. Just like with their soldiers, they don't want even a hint of imperfections in their decor. But whenever Motome is engaging in the practice of Harakiri or Hanshiro is fighting off Li Clan members in the climax, spurts of darkly-colored blood emerge and splatter across the shiny silver courtyard, walls and floors. Suddenly, a visual extension of the Li Clan's desire for perfection is now adorned with the blood of "disgraced" poor people like Motome and Hanshiro. Shot lingering on blood draped across the walls of this place provides not only a fascinating visual metaphor but also a number of striking images. They're the kind of bold shots that deserve to belong in a movie as outstanding as Harakiri.
Posted by Douglas Laman (NerdInTheBasement) at 11:15 AM