In Laman's Terms: Twenty Years of Forgetting About Dinosaur 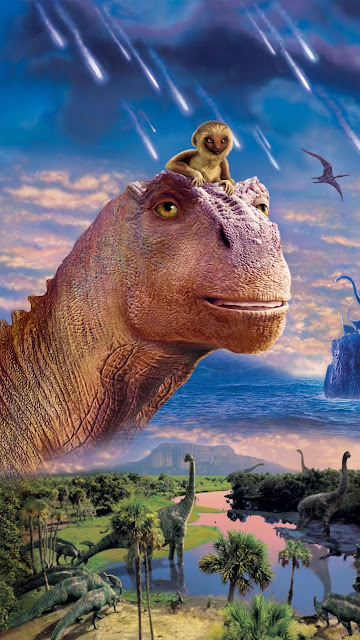 It feels like each of the films in Disney Animation Canon have their own fanbase. This isn't a surprise when it comes to something like Beauty & the Beast or The Lion King. But even box office misfires in the canon have their share of devotees. For instance, Atlantis: The Lost Empire and Treasure Planet lost plenty of cash at the box office but have inspired expansive fanbases nearly twenty years later (I'm happily part of the Treasure Planet one). However, there's one entry in the Disney Animation Canon that seems to inspire no real affection. Even among my generation that loves to use GIF's from childhood movie staples in everyday conversation, this particular Disney title never seems to come up.

I'm talking, of course, about Dinosaur.


Released twenty years ago today on May 19th, 2000, Dinosaur debuted in theaters with a great amount of fanfare. This included an avalanche of merchandise and an an original teaser trailer that carried such grandeur it looked like Disney had their next Lion King. Instead, Dinosaur underwhelmed in numerous respects. Grossing $349.8 million at the worldwide box office, Dinosaur wasn't the box office juggernaut Disney wanted. It only ended up grossing $24 million more than the cheaper 1996 Disney Animation title Hunchback of Notre Dame. In the years since its release, Dinosaur has become something Disney has swept under the rug, save for its ongoing Animal Kingdom ride.

Oh My Disney! articles rarely reference the movie, people on social media don't celebrate the anniversary of Dinosaur's release, even its place in the history of computer-animation has ended up becoming hardly all that significant. What's the reason for this? Seemingly everything with the Disney logo on it gets to have waves of positive nostalgia. What's kept Dinosaur from achieving something similar?

For starters, we've got to understand what makes animated Disney movies click with the public, what separates the Home on the Range's from the Moana's. Perhaps the most ingredient in this equation is characters. Elsa, Simba, Snow White, these characters tend to tap into something deeply personal for children and adults alike. The experiences of being told you can't be yourself. Struggles with confronting with the harshest parts of realities. Yearning for something better. Even a cult title like Treasure Planet has its protagonist, Jim Hawkins, undergo a relatable experience of grappling with his absent father. Thorugh rooting its characters in these deeply human desires, flaws and experiences, cartoon characters suddenly become people you can get emotionally invested in. 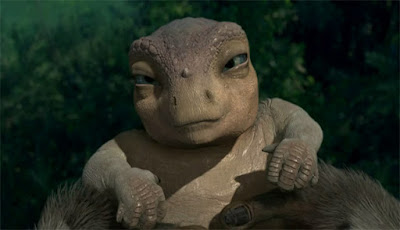 Dinosaur is missing this critical ingredient. Its characters range from boring to nails-on-a-chalkboard tedious. The main character Aladar is especially terrible. He starts out as a bland fellow who has no discernible personality to speak of. He's also lacking a specific flaw or relatable dream to connect him to the viewer. Over the course of the story, he has no real character arc to speak of beyond him eventually getting to hook up with a lady dinosaur (you know she's a lady because she has pink accentuations on her body). Directors Ralph Zondag and Eric Leighton might as well have saved their CGI department some money and just had a rubber mannequin stand-in for Aladar. That mannequin probably would have had more life than the Aladar we got.

How could Aladar ever become any child's favorite character? What about Aladar would speak to viewers of all ages or even just make them laugh for ninety minutes? Give points to Dinosaur for consistency, at least, since Aladar is surrounded by equally disposable friends and foes. In other Disney Animation movies, you'll get delightful comedic sidekicks like Dopey, Kronk, Heihei or the Genie. Here, the best Dinosaur can scrounge up for comic relief is Zini. Dinosaur may take place in the Mezozisc era but Zini is an irritating idea of what constituted "hip" humor in the late 1990's/early 2000's. Zini proclaiming himself to be "The Love Monkey" is memorable for all the wrong reasons.

The other dinos and lemurs in Dinosaur are more tolerable than Zini, but even talented actors like Alfre Woodard and Ossie Davis can't make them these characters memorable. Many dinosaurs, like a timid Brachiosaurus or one dino who acts like a dog, mostly register as half-hearted attempts at Disney comic relief characters. Maybe they'd have been funnier if Dinosaur as a whole had any room for fun. For some reason, Dinosaur comes equipped with a pervasively downbeat tone that has no time for wonder or joy. Paul Schrader's First Reformed had more moments of levity than this Disney kids movie about prehistoric critters!

The grim tone also explains why Dinosaur is lacking another key ingredient of many beloved Disney movies: entertaining villains. No Jafar's, Doctor Facilier's or Ursula's to be found here. Those require a sense of fun and theatricality Dinosaur lacks. Instead, we get a whos-who of Disney villains so unremarkable they make Alameda Slim look like The Wicked Witch of the East. Among those baddies are various Carnotaurus and Velociraptors, who show up throughout the runtime to intimidate Aladar and company. They look intimidating in their character designs, but they're just brutes who roar, they have no personality to speak of.

The most prominent of the antagonists is the villainous Iguanadon Kron, a figure with no discernible personality to speak of. It's easy to imagine kids being bored by this guy and it's doubtful any adults who first viewed Dinosaur as children having fond memories of Kron. Even in the endless spaces of the internet, I doubt any doctoral thesis papers have been written over the finer nuances of Kron's behavior. Maybe Dinosaur's characters wouldn't suffer from such a severe lack of discernible personalities if it weren't for that aforementioned grim tone.

Now, I love it when animated kids movies get dark. But darkness itself isn't inherently good. Rango, Coraline and The Brave Little Toaster don't just throw a grey color palette on their stories and call it a day. Their darkness manifests in a variety of creative ways. In the case of Dinosaur, though, the grimness emerges in the fact that everything is so darn dour as well as the fact that the main characters spend much of the runtime wandering a washed-out desert. Oh, and there's an early scene where a Lemur genocide occurs, that also contributed to Dinosaur getting a PG rating (only the second animated Disney movie to get that rating at the time!)

The dark tones never comes about because it'll enhance the characters or themes of Dinosaur. Instead, it's used in an attempt to find a shortcut to actual dramatic depth. In the process, Dinosaur only runs into a dramatic dead end. Outside of its still outstanding dialogue-free opening scene, the whole movie is a bore. Why would kids wanna watch this when there are so many animated dinosaur movies to watch?

The Land Before Time, for instance, not only has more interesting characters but it's a master course on how to use darker story elements in kids fare well. Any of the scenes where Littlefoot deals with the death of his Mother carry an actual emotional punch because we like Littlefoot, we care about his journey. By contrast, who cares what happens to Aladar? When dark things happen to him and his loved ones, it's just a bunch of grim nonsense, not something that actually stirs the heart.

A quote from the Ultimate Collector's Edition DVD of Dinosaur concisely explains the impetus for the faults that have led to Dinosaur being forgotten. Per a 2005 DVDizzy review, a booklet in this DVD features a quote from "...then-head of Walt Disney Feature Animation Thomas Schumacher [which] states, "Dinosaur didn't come to us as a story we had to tell. It came to us as a concept we wanted to try." 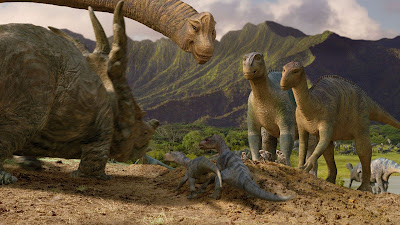 Well, that says it all. Granted, the other entries in the Disney Animation Canon didn't come up devoid of outside influences separate from the artistic process, far from it. But in the best cases, the likes of Moana, Tangled and Beauty and the Beast featured characters, musical numbers and visuals that easily surpassed more cynical creative motivations. In the case of Dinosaur, the desire to tackle a concept (one populated by easily-marketable creatures like dinosaurs) steamrolled over the elements that have defined the most lasting Disney Animation features as well as just good cinema in general.
Engaging characters, fun, poignancy. They're in abundance in the best Disney Animation productions but totally absent from Dinosaur.

Today is the twentieth anniversary of Dinosaur and the reasons are endless why nobody is out there writing a "Kron Was Actually Right" essay to celebrate the occasion.

P.S. You know what one actually good element of Dinosaur is? James Newton Howard's score. A big part of why that iconic teaser trailer worked so well laws because of his accompanying track The Egg Travels.