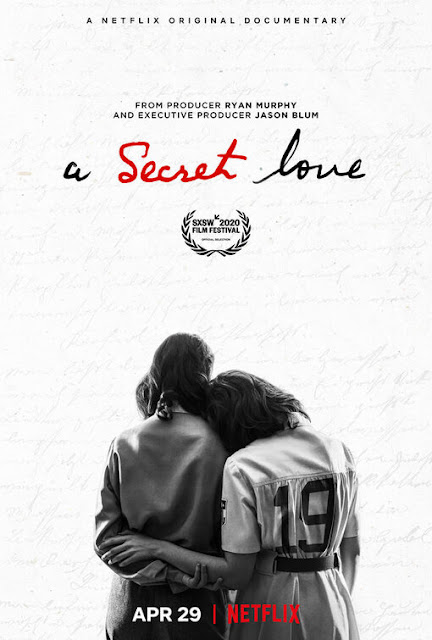 A Secret Love will receive one of my shortest movie reviews in a while. However, that shouldn't be taken as a comment on it being lackluster in quality or not being substantive. It's just that the movie sets out to do something relatively simple and achieves it. Sometimes you can break films like this into complex explanations for how they secured their artistic success. Sometimes, though, a movie like A Secret Love reminds you of its success in more basic, but no less worthy, terms. A documentary that wants to be a heartfelt tearjerker succeeds in being a heartfelt tearjerker. You don't need 3000 words to explain why this one works.


The premise for A Secret Love concerns Terry Donahue and Pat Henschel, the former of whom used to be a player on the All-American Girls Professional Baseball League in the 1940s. They've lived with each other for years and neither of them have never married. Their families think they're just a couple of gal pals but it turns out Terry and Pat are lovers. Not just recent ones either. These two have been romantically entangled since the 1940s. Their love has stretched for decades, including stretches of American history where being gay was seen as both a figurative and literal death sentence in America.

While A Secret Love doesn't shy away from archival recordings and footage depicting how homosexuality was demonized in powerful spaces in America in the mid-20th-century, that's not its central focus. Instead, A Secret Love dedicates much of its runtime to sweet anecdotes from Terry and Pat regarding their romantic escapades. Such stories do make reference to the societal and familial pressures to adhere to heterosexual norms. But A Secret Love does not want to define its central couple solely by their hardships. Tales like Terry handing Pat a love letter during a snowy nighttime walk are what director Chris Bolan uses to define the leads of A Secret Love.

Emphasizing the humanity and heartwarming romance of Terry and Pat ends up making A Secret Love hard to resist. True, the camerawork and editing aren't all that exceptional and an awkward mid-movie time jump to a year later could have been handled in a more cohesive fashion. But the enduring affection between Terry and Pat is the ace in the hole that keeps one engaged throughout A Secret Love. The soul-stirring nature of the central relationship is imbued with melancholy in the second-half of A Secret Love, as Terry's health begins to decline. It's a situation Pat struggles to truly grasp which creates some tense scenes between Pat and Terry's niece, Diana Bolan.

Eventually, though, these appropriately taut sections of A Secret Love give way to more moving sequences between Terry and Pat. The highest of these scenes include the two finally tying the knot during a wedding ceremony. Did this get me teary-eyed? Well, considering I once got emotional over the teaser trailer for Dolittle (hey, it was during the holiday season, I'm always emotionally fragile then), yes, I got weepy here and during plenty of other parts of A Secret Love. Chris Bolan's documentary may not have anything massively thought-provoking to say about its central subjects but it doesn't really have to. Sometimes, two people in love can just be two people in love and a heartwarming documentary can just be a heartwarming documentary.

"You were always a rule-breaker, huh?"
"Yeah, I guess that's why I had such a good life."
- a relative of Terry and Terry
Posted by Douglas Laman (NerdInTheBasement) at 11:54 AM