Watch Out For Delightful Wacky Comedy in George of the Jungle 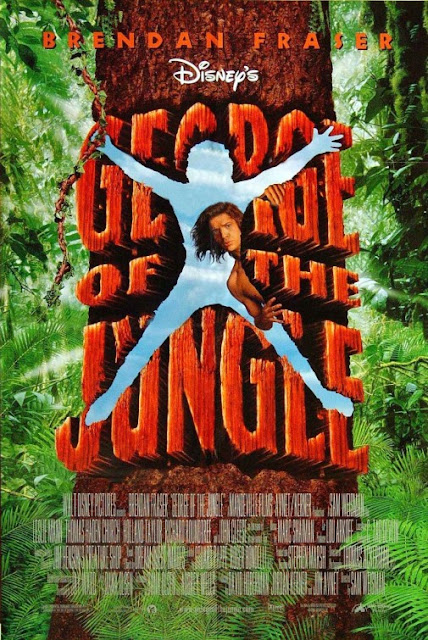 I have a very unorthodox relationship with the George of the Jungle movie. While the actual film is wacky enough to make it the last thing that'd ever traumatize a child, George of the Jungle's teaser trailer scared four-year-old Doug Laman something fierce. That first-half of the teaser where it's putting on airs of being something serious, complete with an ominous drumbeat, absolutely terrified me, I couldn't even watch the trailer long enough to make it to the second half where it's all revealed to be silly and harmless. I consumed everything with the Disney logo on it as a kid. That traumatic teaser trailer ensured that I didn't watch George of the Jungle until I was well into adulthood.


Based on the 1967 cartoon created by Jay Ward, George of the Jungle follows the exploits of a man who's been raised since infancy in the Bukuvu region of South Africa. There, he's become a comical pastiche of Tarzan, one who has developed a legendary reputation as The White Ape despite actually being a clumsy vine-swinger who can't help but smash into every tree in his path. George's life gets turned upside down when he saves the life of Ursula Stanhope (Leslie Mann). Though she's engaged to the egocentric and wealthy Lyle Van De Groot (Thomas Haden Church), she quickly begins to fall for George. Meanwhile, George is navigating what it's like to interact with a human woman for the first time while he also eventually has to learn how to transverse the unfamiliar landscape of San Francisco, California.

Though the movies named after George, a clever maneuver on the part of screenwriters Dan Olsen and Audrey Wells is to make Ursula Stanhope the audience point-of-view character. She's the character whose journey we follow for the majority of the film, including at the start of the film when George is but a whisper in the trees, a legend told between her tour guides. George is still a prominent part of the proceedings to be certain, but Ursula actually gets considerably more to do than just be a love interest. Scenes like Ursula and her friends looking on at George romping with a horse are especially prominent examples of how George of the Jungle's story is filtered through Ursula's perspective, lending the project a female gaze in the process.

Meanwhile, Olson and Wells screenplay also renders the proceedings in a highly stylized comedic fashion meant to emulate the over-the-top sensibilities of its source material. They may be flesh-and-blood people but the denizens of George of the Jungle still engage in cartoony slapstick usually accompanied by some sort of wacky sound effect. Many live-action movies that try to emulate the pacing and comedy of classic cartoons tend to end up being hyperactive & noisy rather than funny. Remember when Son of the Mask tried to translate Tex Avery anarchy into creepy CGI dogs and babies? It's one thing to do these antics in cartoons, it's another to do them in the real world.

Luckily, George of the Jungle succeeds far better than most in pulling off this feat, mostly because its smart in how it replicates the comedy of classic cartoons. George can do zany things (particularly when he's on caffeine or fighting a lion) but he's not always moving around with the speed of Daffy Duck. That would be difficult to translate into live-action without employing extensive amounts of animation that would undercut doing George of the Jungle in live-action in the first place. A lot of the time, director Sam Weisman manifests cartoony humor in over-the-top sight gags or humorous wordplay. These are the kind of cartoony jokes that can be pulled off in live-action, as classic films like What's Up, Doc? have proven. Who needs the noisy chaos comedy of Son of the Mask when you can have characters hysterically interact with Keith Scott's Narrator?

Given that George of the Jungle plops out jokes like there's no tomorrow, it's no surprise that not every one of the gags lands. Several instances of bathroom humor in the third act feel not only tired but out of place. After all, this is a movie whose humor is a homage to 1960s cartoons. Extended urine and fart gags weren't a common sight on Jay Ward's cartoons and their presence in a movie explicitly meant to evoke those animated programs comes off as intrusive. On a more positive note, Brendan Fraser is just terrific in the titular lead role. Fraser's skills with good-nature but none too bright characters were already apparent in the likes of Blast from the Past. His comedic gifts are put to great use here while his endearing aura makes George a character you consistently enjoy watching, even when he's slamming into a tree for the umpteenth time.

Yes, the movie George of the Jungle sure is delightful. That teaser trailer, on the other hand, still gives me the creeps!
Posted by Douglas Laman (NerdInTheBasement) at 9:41 AM

Email ThisBlogThis!Share to TwitterShare to FacebookShare to Pinterest
Labels: 1997, Blast From the Past, Brendan Fraser, George of the Jungle, July 1997, Leslie Mann, Movie Review