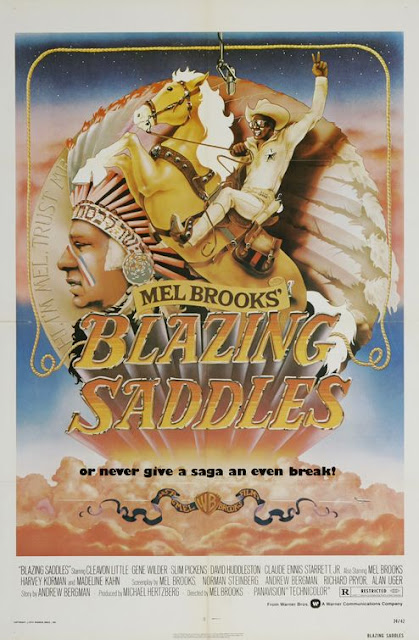 It's often been repeated that you couldn't make Blazing Saddles today because of people being "too PC". To me, that registers as a bunch of hooey. Plenty of provocative comedy gets made. Sorry to Bother You? It's Always Sunny in Philadelphia? Slut in a Good Way? Now, I'd agree Blazing Saddles couldn't get made today but not because of old white dude conspiracy theories regarding "kids are too sensitive these a day". Blazing Saddles was a response to the then-omnipresent Westner genre that had only started to fade from American cinemas at the start of the 1970s. It's skewering of Westerns was a byproduct of its time. To remove it from 1974 is to remove important historical context informing its comedy.


Whether it's 1974 or 2020, though, Blazing Saddles still registers as a highly amusing comedy. The feature follows Bart (Cleavon Little) being saved from the hangman's noose and being placed as the Sheriff of a local small town called Rock Ridge. It's all part of a larger conspiracy by Hedley LaMarr (Harvey Korman), who plans to use the presence of a Black sheriff to get the racist denizens of Rock Ridge to leave their town. Once they're gone, he'll be free to build his railway right through Rock Ridge. However, something unexpected begins to happen once Bart actually earns the affection of the citizens he's protecting, including the once-great Waco Kid (Gene Wilder).

Writer/director Mel Brooks (who penned the screenplay alongside a gaggle of other writers, including Richard Pryor) imbues a farcical aesthetic to Blazing Saddles. The whole thing is a cartoon that somehow escaped into the real world. People are constantly bonking into pieces of the set, wacky events transpire with barely anyone blinking an eye and the fourth-wall gets broken repeatedly, including in the climax which takes this meta-approach to its greatest extreme. As said in my George of the Jungle review, many films attempting to emulate the stylized comedy of classic cartoons end up simply being empty hyperactive noise. Luckily, Blazing Saddles is able to make Tex Avery proud without devolving into tedious chaos.

Much of this comes down to elements as simple as Brooks displaying a gift for comedic timing in his directing. I especially love how he lets certain absurdist gags just linger on-screen for a moment instead of hurrying off to the next gag. Meanwhile, Cleavon Little channels Barbara Streisand in What's Up, Doc? in doing a perfect live-action translation of Bugs Bunny. Little totally commits to this comedically scheming role and that makes Bart a hysterical character. Scenes where Bart engages in antics like faking a hostage situation with only himself especially benefit from how much Little is throwing himself into this role.

Another nifty aspect of Blazing Saddles is that it's actually shot like an honest to God movie. That makes sense for this particular project since, if you're gonna lampoon Westerns, you're also gonna have to embrace the elaborate camerawork and expansive frames that defined many of these features. Though the cameras may be capturing wacky and even juvenile antics, Brooks and cinematographer Joseph Biroc rarely film things in a manner reminiscent of traditional comedic filmmaking. An amusing subtle joke throughout Blazing Saddles is juxtaposing camerawork (as well as costumes and production design, for that matter) that would be right at home in a John Ford movie alongside the type of zany comedy you'd never catch John Wayne doing.

The only drawback to Blazing Saddles delivering such incredible attention to detail in its visuals is that it made me sad on how many modern-day studio comedies phone in their visuals. Exceptions like Game Night or Booksmart exist, no question about that. But for the most part, the likes of Daddy's Home, Tag and Good Boys are content with oversaturated lighting and clumsy camerawork working around half-hearted improved comedy. Maybe that's actually the biggest reason Blazing Saddles couldn't get made today. The film's handling of race wouldn't be the issue. Instead, trying to film a comedy like it's an actual movie would terrify 2020 Warner Bros. executives!
Posted by Douglas Laman (NerdInTheBasement) at 11:43 AM