The Lodge's Filmmaking and Lead Performance Are Thoughtful, Its Script Less So 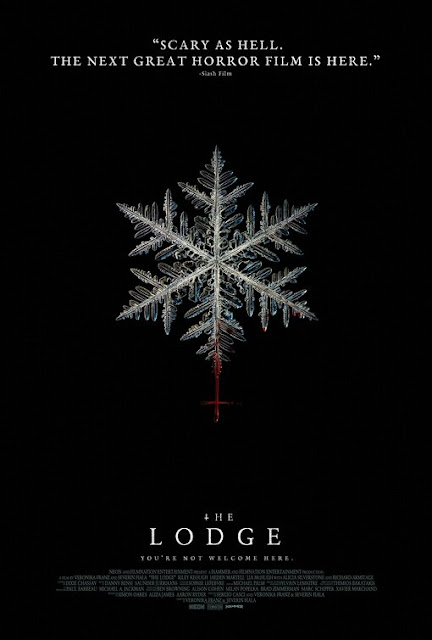 Right away, The Lodge lets the viewer know that it's going to be playing things gruesomely. Once Laura Hall (Alicia Silverstone) learns that her ex-husband Richard Hall (Richard Armitage) is marrying a woman named Grace Marshall (Riley Keough), she pours herself a glass of wine, sits down at her kitchen table and proceeds to shoot herself. Now deceased, Laura's kids, Aidan (Jaeden Martell) and especially Mia (Lia McHugh), are traumatized from the whole affair and harbor a deep level of resentment again Grace. They blame her for the death of Laura. Grace having a past associated with a Catholic church death cult also makes them suspicious of Grace.


Suspicious or not, all four of them are going to be spending Christmas together in an isolated log cabin for Christmas. Grace really just wants to connect with the two kids but the children don't want anything to do with her. When Richard is forced to leave for a few days due to work duties, strange things begin to happen around the house. Objects go missing, including Grace's pills and all the food. Strange things begin to appear, like memorial photos mourning the death of Aiden and Mia. What's going on here? All of that suspense informs the horror of The Lodge, which hails from directors Veronika Franz and Severin Fiala, who also wrote the screenplay alongside Sergio Casci.

In the future, The Lodge's filmmaking style will immediately pinpoint it as belonging to the modern-day era of horror cinema. Much like how shaky-cam found-footage filmmaking earmarks an early 2010's horror tale, so too do The Lodge's reliance on prolonged wide shots make it apparent that it was released in the age of Robert Eggers/Ari Aster/David Robert Mitchell horror films. The camerawork is impressively-realized in terms of both the performances and eerie tone getting maintained for extended single-takes. Instead of wearing out their welcome over the course of an extended shot, the acting and tone manage to excel under Franz and Fiala's slow-burn style of filmmaking.

If there is a complaint to be had with approach of filmmaking, though, it's that the pay-off to The Lodge's build-up isn't as successful as it could be. The trouble here is that the pay-off for The Lodge ends up both betraying its best creative instincts and being formulaic. The Lodge creates interesting horror out of the ambiguity of what's really happening to Grace, is she just a sleepwalking person off their rocker or is something more nefarious going on here? By contrast, the eventual concrete explanation for what's behind the strange phenomenon in the house is much more predictable. Ambiguity is removed for something that's conceptually chilling but stands as much less unnerving than the uncertain.

Similarly, the final five minutes take the plot into dour but predictable territory while the recurring visual motif of Mia's dolls as a symbol of her and Aidan's internal emotions is a concept that's too derivative of other thoughtful thrillers. The Lodge's commitment to its arthouse style of horror filmmaking is truly admirable and yields some super unnerving moments, particularly in the second act when Grace, Aiden and Mia are all just trying to figure out what the hell is even going on inside this cabin. Unfortunately, a number of key aspects of the script just aren't as thoughtful or unique as they could be. The camerawork evokes Midsommar or The Babadook but the weakest parts of The Lodge's script echo far more generic horror fare.

While I have some quarrels with the screenplay for The Lodge, there's no doubt that Riley Keough delivers the goods in the lead performance. Emerging onto the screen with this slightly timid but hopeful persona, Keough establishes Grace as someone you can immediately understand wants things to go right, both in her relationship with these kids and in her reformed life. Having established this starting point, Keough proceeds to make a frightening show of depicting Grace unraveling over the course of The Lodge. The way she can alternate between portraying Grace as a figure we root for and as a figure we fear with equal levels of conviction is especially impressive. There are qualms to be had with certain elements of The Lodge but don't give the cold shoulder to Riley Keough's truly great lead performance!
Posted by Douglas Laman (NerdInTheBasement) at 10:03 AM