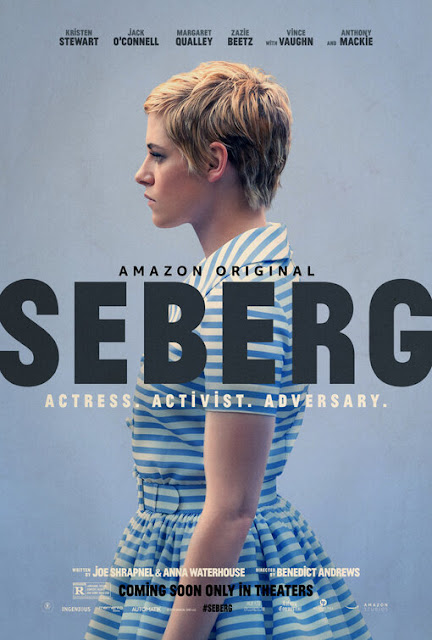 Seberg is half of a good movie. Anytime it focuses exclusively on its titular character, real-life movie star Jean Seberg (Kristen Stewart), it's not flawless but it's certainly more assured of itself. It's actually rooted in a real person with tangible goals and discernible struggles. But Jean Seberg is not the only focus of the screenplay by Joe Shrapnel and Anna Waterhouse. We also have an FBI agent named Jack Solomon, a fictitious character played by Jack O'Connell. Constantly cutting away from Seberg's storyline to the infinitely less interesting trials & tribulations of Solomon, that's where Seberg really loses its luster.


The storyline the two characters are headline concerns Jean Seberg traveling to Los Angeles in the late 1960s. Seberg is a woman who isn't afraid to make a stand for what she believes in and while at the airport, she stands with a group of Black activists and gives a Black Power Salute. This catches the attention of the FBI, specifically newbie agent Jack Solomon and his mentor Carl Kowalski (Vince Vaughn). As Seberg begins a romantic relationship with activist Hakim Jamal (Anthony Mackie), Solomon and other FBI agents begin listening in on Seberg in her day-to-day life. Through this, they gather incriminating information on Seberg that they hope to use to ensure the movie star stops speaking out for activist groups challenging the U.S. government.

Splitting up a movie's storyline between two disparate characters is always a tricky maneuver. In the context of Seberg, though, it's an especially baffling decision. Solomon isn't just another lead figure, he's frequently the audience point-of-view character. Much of the story is framed through his eyes. This means Jean Seberg is frequently reduced to someone only defined by Solomon listening in on her or secretly watching her. This makes the Seberg's angst-ridden take on Jean Seberg an example of voyeurism, not defining this historical figure as a person. Worse still in Solomon's storyline, though, is this FBI agent's own personal character arc.

Solomon comes into the FBI all bush-tailed and wide-eyed only to gradually learn of the lengths the agency will go to ruin Seberg's life. It's hard to get invested in this storyline considering how predictably written it is. Solomon's entire arc is tediously paint-by-numbers and the film never takes the character to the dark places it needs to. Only briefly does Seberg hint at something more substantive with the character of Jack Solomon. A scene where Solomon, torn up over what he and his cohorts have done to Seberg, lashes out at his wife in a manner reminiscent of Kowalski's abusive behavior to his own wife hints that Seberg might be taking a tragic direction with this character. Even as he feels remorse, Solomon is becoming the kind of destructive figure he despises.

Instead, a tidy redemption character arc ensues. Solomon's entire storyline ends up being as cookie-cutter as the filmmaking style of director Benedict Andrews. There's little in the way of style or tension in Andrews' work behind the camera, he mostly lends a flat visual sensibility to Seberg. Only a recurring motif of Jean Seberg being surrounded by a trio of mirrors conveys any sort of visual imagination. Much of Seberg ends up being this disposable but it does have one major redeeming factor. Though even she can't salvage the film, Kristen Stewart does make for great casting as Jean Seberg.

If nothing else, Seberg allows Stewart to demonstrate just how versatile she is as a performer. In her earliest scenes when Seberg has control over her life, Stewart emanates a believable movie star air just to the way Seberg walks. From her posture to her speaking patterns, Stewart's Seberg is convincing as a mid-20th century movie star without lapsing into a stylized caricature. Later on, when Seberg begins to have a breakdown regarding her paranoia over someone watching her, Stewart lends tangible tragedy to the characters' plight despite the screenplay giving her so little to work with. Stewart, as well as Anthony Mackie in a solid supporting performance, deserved a great movie, not just half of a good movie like Seberg.
Posted by Douglas Laman (NerdInTheBasement) at 7:31 PM