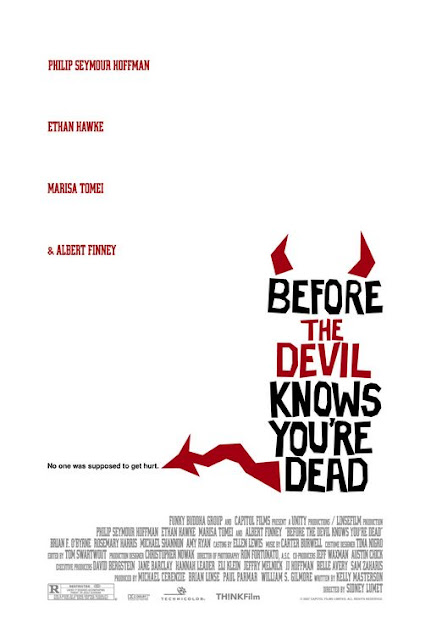 Before the Devil Knows You're Dead begins with a bank robbery gone awry. A masked man tries to get money out of some mom-and-pop jewelry store while holding an elderly woman at gunpoint. We do not know who any of these people are or what their motivations are. We just know that this is not how things were supposed to go. Eventually, the masked man is shot while the elderly woman is also left deceased. As getaway driver Hank Hanson (Ethan Hawke), seeing that his cohort is dead, drives away in a panic, the frame freezes. From here, writer Kelly Masterson and director Sidney Lumet begin to travel down a non-linear path to show the viewer exactly what went wrong here and why.


We quickly learn that the mastermind behind this whole operation was Andy Hanson (Phillip Seymour Hoffman), a finance executive who has got a lavish job and a wife, Gina (Marisa Tomei). He's seemingly got a perfect life. In reality, his firm is guilty of embezzling money and he needs some cash quickly to help cover his tracks. This is when he presents Hank with an idea: rob the jeweler store their parents run. It's a small place, there won't be any guards, they'll just take some cash and jewels and get out of there. It sounds simple enough but these matters never stay simple. Eventually, Hank involves a loose-cannon named Bobby (Brian F. O'Bryne), who brings guns into the operation.

Andy was strict on that one. No guns. "Just go get a toy gun" he said. But real guns get involved. That one slip-up creates a domino effect that leads to the demise of the woman running the jewelry store: Andy and Hank's mom. From that plot turn alone, it's apparent Before the Devil Knows You're Dead doesn't ease up on gruesome material. The material is pervasively dark but luckily, Masterson and Lumet are able to justify the grim proceedings. This isn't an example of a film trying to be dark just for shallow edginess. There's some real authenticity in how it explores the damaged psychological states of these people. Charles (Albert Finney), Andy and Hanks' father, mourning for his dead wife alone rings with such heartbreaking realism.

The same can be said for a scene where Charles tries to have a heart-to-heart with an unmoved Andy as well as a devastating follow-up sequence depicting Andy lashing out in his car about his Father trying to make amends. In these scenes, darkness isn't communicated just from desaturating the color palette like you'd see in weaker attempts at cinematic "grittiness". In Before the Devil Knows You're Dead, it comes from exploring the finer intricacies of what makes these characters tick. Their stories inform the dark tone rather than the dark tone being a blanket that suffocates the characters. Similarly, the non-linear approach of Masterson's screenplay actually works for this specific story rather than being a gimmick.

Telling Before the Devil Knows You're Dead in this out-of-order manner allows the wide-ranging consequences of these characters' actions to be sizeably surprising. For example, there's this revelation of how Charles was just having an ordinary day taking a test at the DMV the day his wife perished. This reveal works because of its placement in the middle of the movie. Knowing what's happening with Andy and Hank adds layers of tragedy to Charles just going about his normal morning with his soon to be deceased lover. A conventional day can turn into something harrowing at the drop of a button, a concept that wouldn't be as effectively told if Before the Devil Knows You're Dead opted for a traditional linear narrative.

This non-linear material is handled by director Sidney Lumet, the legendary filmmaker behind 12 Angry Men and Network. Lumet's decade of experience as a director ensures that the unique narrative structure of Before the Devil Knows You're Dead gets pulled off with such effortlessness. Meanwhile, Lumet lends thoughtful blocking and staging to the dialogue-heavy proceedings. The arrangement of Charles and Andy in the aforementioned scene where Charles tries to make amends with his son especially struck me as brilliantly-executed. Their positions in the frame speak volumes about their relationship with one another.

On top of such exquisite writing and directing, Before the Devil Knows You're Dead also delivers another sublime Phillip Seymour Hoffman performance. It never ceases to amaze me what a versatile performer Hoffman was. Watching his work as Andy, you'd never believe this is the same guy from Synecdoche, New York or Boogie Nights. From his first scene, depicting Andy buying hot dogs for kids at a Little League game, Hoffman magnificently realizes the distinct personality of Andy and never stops from there. Ethan Hawke also provides effectively tormented work as Hank, the scenes where Hawke's depicting his character being all torn up over the robbery going askew just reek with vivid agony. Just watching Hoffman and Hawke trading dialogue is enough to get my attention but Before the Devil Knows You're Dead provides plenty more to praise in addition to those two noteworthy performances.
Posted by Douglas Laman (NerdInTheBasement) at 12:14 PM