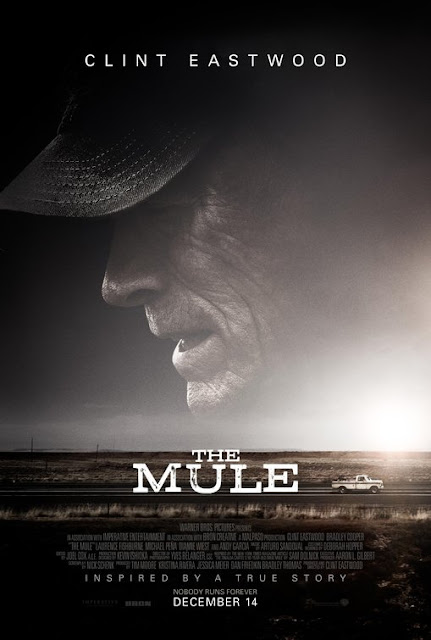 For the last decade, Clint Eastwood has directed movies that have followed a rigid formula. Eastwood has been fascinated by straightforward biopics about normal people doing heroic things while frequently being persecuted by "the man". Chris Kyle, Sully, the trio at the heart of The 15:17 to Paris, Richard Jewell, these have all been Eastwood's central focus in the last ten years. Unfortunately, Eastwood never has much to say about these people. His films don't render famous faces as people but as statues, monuments to ideas of human goodness without a trace of humanity in sight.


That makes The Mule a welcome change of pace for Eastwood. He's still doing a movie based on a real person, Leo Sharp, an elderly man who worked as a drug mule for drug cartels. However, Sharp has been used as the inspiration for fictitious protagonist Earl Stone (Clint Eastwood). Freed from the shackles of living up to the mythic reputation of an actual person, Eastwood and screenwriter Nick Schenk are free to actually imbue The Mule with a personality. The stuffy and drab aesthetic of Eastwood's other modern movies is gone. In its place is a movie that's wildly inconsistent tonally but is undeniably fun to watch.

Before he becomes a drug runner, Stone is a plant expert treated by everybody as God's gift to man. He's so nice to everyone that people just refer to him as Jimmy Stewart. Of course, the only people who aren't fans of Stone are his family. For decades, Stone was so enamored with his cross-country work that he ignored his children as well as Marry (Dianne West), his significant other. Now in his sunset years exiled by his family and facing financial turmoil, Stone turns to drug runs as a way of making money. A 90-year-old-man doing this kind of work is...unexpected but it turns out Stone has got a knack for this stuff.

Soon, Stone becomes enough of a prolific figure in the world of drug trafficking to get on the radar of DEA agents Colin Bates (Bradley Cooper) and Trevino (Michael Pena). Sooner or later, everything in Stone's life, his troubled home life, his drug dealings, they're all bound to catch up with him. That part of the premise engages in a sense of melancholy reflection that's defined some of Eastwood's best movies, like Unforgiven and Million Dollar Baby. The Mule doesn't hit anywhere near the heights of those two movies. But when it's time for Stone to reminisce about the ways he screwed up in his life, Eastwood, both as a director and an actor, tends to really excel. Eastwood lends some authentically contemplative attitudes to these sequences that lend actual depth to a premise that sounds totally wacky.

Not that there aren't moments in The Mule that lean into a sense of comedy. In fact, The Mule frequently veers back and forth between intense showdowns between drug sellers and comedic asides like one where two of Stone's handlers find themselves humming along to Dean Martin's Ain't That a Kick in the Head. Frequently, the tonal shifts are jarring but trying to juggle multiple tones already makes The Mule more of an ambitious effort than Eastwood's other recent directorial efforts. Screenwriter Nick Schenk swings for the fences with the tone of The Mule while he also creates an undeniably amusing protagonist in the form of Earl Stone, a person whose entire demeanor suggests he was always destined to be an old man.

Stone hates every cell phone he sees, fires off nonsensical old man witticisms, and also is pleasantly upbeat about discovering that Lesbians are capable of riding motorcycles. He's an absolute hoot to watch while it never fails to be intriguing to see a guy whose personality is predicated on the phrase "Aw, shucks" mingling in the world of drug trafficking. Other characters in Schenk's script aren't quite as interesting. Stone's family members, for example, don't get to be fully-formed characters in their own right. This issue becomes even worse in the final twenty minutes of the film, where people like Stone's daughter mostly become mouthpieces for overly obvious dialogue. Meanwhile, I don't even know why Michael Pena was hired for the throwaway role of Trevino.

Eastwood's direction, meanwhile, is nowhere near as memorably audacious as Schenk's screenplay. Once again, Eastwood adheres to a murky grey color palette no matter what the tone of the scene is. At least there's some unintentionally amusing juxtaposition to be found in how Eastwood uses such bleak lighting for scenes depicting Stone engaging in sexual threesomes. The acting and music choices for these sequences suggest frivolous escapism but Eastwood's direction conveys that we're watching something as bleak as Au Hasard Balthazar. The Mule can't escape a number of the flaws that have plagued Clint Eastwood's filmmaking in recent years. However, it did provide me with two hours of decent entertainment punctuated with memorably odd details, like how a party scene contains a large number of butt shots.

Heed the advice of John Mulaney & Pete Davidson and give this wackadoodle movie a watch.
Posted by Douglas Laman (NerdInTheBasement) at 12:51 PM