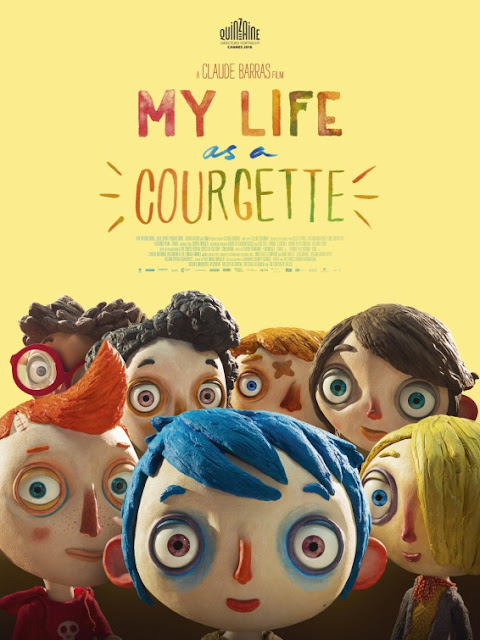 More live-action filmmakers should give animated filmmaking a try. After all, animation isn't a filmmaking technique from another planet, it's just another way to tell a story. When masters of live-action cinema give animation a spin such as with Gore Vebrinski with Rango or Steven Spielberg with The Adventures of Tintin, the results can be dynamite. The imagination of these auteurs can be fully unleashed in the limitless domain of animation. See also Celina Sciamma, the writer/director of Portrait of a Lady on Fire, who penned the screenplay for My Life as a Courgette. Her gift for exploring people's internal struggles is utilized poignantly here in a tale that fully takes advantage of the unique aspects of animation.


Directed by Claude Barras, My Life as a Courgette begins on a dark note with Courgette (Gaspard Schlatter) inadvertently killing his mother. Now an orphan, Courgette is sent to live in an orphanage occupied by a variety of distinct youngsters. One kid is constantly eating, another little girl has her hair covering her face and yet another child is always certain that any cars parking in the orphanage driveway belongs to her Mother. At first, Courgette's life at the orphanage is difficult due to the persistent bullying of Simon (Paulin Jaccound). However, it isn't long before the pair become friends, bonding over their shared experiences with growing in fragmented houses.

Courgette also makes a pal in the form of Camille (Sixtine Murat), a young girl who arrives shortly after Courgette's become comfortable in this orphanage. The two get into a number of adventures together, developing a tender friendship in the process. Courgette and Camille's connection is emblematic of how My Life as a Courgette is a tale of unity between people who feel so lonely. They may have experienced dark circumstances, but Sciamma's screenplay doesn't render the children in My Life as a Courgette as just vessels for tragedy. They're allowed to be goofy, have snowball fights indoors, or engage in any other feelings on the wide spectrum of human emotions.

This doesn't mean Sciamma's script shies away from darker material when the time is right for it. She particularly does well in subtly depicting the melancholy ways these kids are coping with past trauma. Just the sight of Simon lingering under a staircase communicates more about his mental state than any piece of dialogue could. However, this isn't the only way My Life as a Courgette frames its central orphaned characters. Because of its more complex approach to Courgette and his friends, the cast of My Life as a Courgette is able to be fully-realized people.  Ironically, this screenwriting approach goes hand-in-hand with an animation style that totally deviates from reality.

Brought to life through stop-motion animation, the characters in My Life as a Courgette are not meant to look realistic. Our lead character has naturally-born blue hair while all the kids have these gigantic round heads that dwarf their smaller bodies. Environments, meanwhile, carry an intentional artificial quality, with exterior environments especially looking more like something you'd find on a Thomas the Tank Engine playset rather than in a live-action film. Such descriptions should not be taken as critiques. On the contrary, Courgette has a one-of-a-kind style of stop-motion animation. That's an impressive feat given that stop-motion feature films frequently struggle to create visual aesthetics that don't echo either The Nightmare Before Christmas or the works of Aardman.

Congrats, then, to My Life as a Courgette for creating a style of animation that feels totally like David S. Pumpkins in that it works as its own thing. Much like the stop-motion work done in Fantastic Mr. Fox, it also becomes impressive how emotionally engaging Courgette is despite having an animation style that proudly deviates from reality. Courgette and his friends don't look like real people in the slightest. However, the film they inhabit manages to make them as absorbing as flesh-and-blood people. That's a tribute to the excellent work done by the animators as well as key creative personnel Celina Sciamma and Claude Barras. They've all come together to create a reminder that animation doesn't just need to be used for loud CG-animated family movies. It can also be used for intimate adult-skewing storytelling like My Life as a Courgette.
Posted by Douglas Laman (NerdInTheBasement) at 11:11 AM