In Laman's Terms: Yoda and the Art of Making the Unreal Real 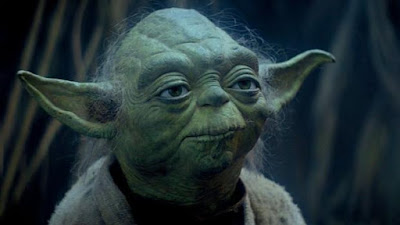 An umpteenth viewing of Return of the Jedi on May the Fourth inspired a number of new thoughts on this particular Star Wars entry. For one thing, Leia's line to Luke about "You have a power I could never hope to understand!", in reference to The Force, now stands as extra bittersweet given how we saw her understanding and using that power in The Last Jedi. For another, I actually like the Ewok's. They're cute and they viciously beat up evildoers. This means the Ewok's are OK by me. And then there's Yoda. Though he only appears in Return of the Jedi for one scene, watching Yoda reminded me of something important. No matter how many times I watch these Star Wars movies, this character will always resonate as something real to me.


I'm well-aware of Yoda being a puppet handled by Frank Oz and a team of other puppeteers. Obviously, he's not real. But when I'm watching these movies, the real world fades away. In Empire Strikes Back, Return of the Jedi and The Last Jedi, I always buy Yoda as an actual organic being. This small green critter from another world becomes something real that inspires a lump in my throat whenever he imparts sage wisdom to Luke Skywalker. It's a truly remarkable feat of visual effects wizardry, the pinnacle of what anyone would want when it comes to characters created entirely through visual effects work. All the technology melts away to reveal an actual emotionally engaging character.
Partly this can be attributed to Yoda being a puppet. There's a tactility to Yoda that makes it so easy to buy him as a living breathing creature. His skin has creases that actually look like creases, his whispy white hair looks appropriately disheveled, his clothes are tattered. The intentional imperfections in his costuming and appearance ensure that Yoda's visual appearance evokes reality. It also helps that his interactions with Mark Hamill's Luke Skywalker are so natural. Instead of a CGI creation represented by a tennis ball on a stick during principal photography, Mark Hamill actually got to interact with Yoda on the set. There was an actual creature on the set for him to engage with. Said creature was apparently so believable that Empire Strikes Back director apparently frequently delivered directions to the Yoda puppet rather than Frank Oz!

With Yoda actually being on the set, Hamill doing such strong work playing off of him, not to mention Frank Oz doing such excellent work in his voice performance as Yoda, it's no wonder Yoda is such a captivating figure for people like myself. In the years since The Empire Strikes Back, many other characters realized through solely visual effects have emerged. In retrospect, Yoda served as the first entry in a wave of VFX Characters, with 1989's Who Framed Roger Rabbit? taking this concept to the next level with a whole cast of VFX Characters. It was the only way a movie about vintage cartoons engaging in a neo-noir with real people could ever work. Much like Yoda's believability stemmed from Mark Hamill's believable interactions with the Yoda puppet, so too did Roger Rabbit make its zany cartoons feel real by having them interact with a magnificent Bob Hoskins performance.

Hoskins may have been playing off a hyperactive rabbit but he never treated his performance as a joke. Him lending such authenticity to his take on the archetype of a film noir protagonist made him the perfect foil to the titular wacky character. Thirty-one years later, it's still incredible to watch Hoskins interact so effortlessly with co-stars that were added in post-production. What was groundbreaking and uncommon for Empire and Roger Rabbit has proved to be normal now. The process of acting against animated co-stars sent Bob Hoskins into a state of recurring hallucinations in the late 1980s. Nowadays, all young actors headlining major movies are expected to interact with animated co-stars.

For example, Justice Smith has to have a good rapport with a CGI Detective Pikachu while Hailee Steinfeld is required to have solid chemistry with Bumblebee. Though such VFX characters are a common sight these days, not every character realized through visual effects wizardry has the same emotional engagement as Yoda or the Roger Rabbit cast. Does anyone remember Cogman? What about those wretched CGI Smurfs? Incubus from Suicide Squad? How about Dwayne Johnson's CGI Scorpion King from the climax of The Mummy Returns? The list is endless. All the money spent n VFX technology in the world couldn't salvage characters the audience just couldn't connect with.

The best VFX characters in the modern era echo older characters like Yoda in two qualities. For one thing, the VFX characters have discernible human qualities while the other is having natural human performances to bounce off of. One excellent modern example of this is Rocket Raccoon in the Marvel Cinematic Universe movies. When he's having his tavern breakdown in the first Guardians of the Galaxy movie, Rocket aches with such human pain. In that moment, a CGI raccoon becomes something recognizably human. The fact that co-stars Chris Pratt, Zoe Saldana and Dave Bautista never treat Rocket as a punchline but just another human being further enhances the believability of the character.
A number of motion-capture characters portrayed by Andy Serkis also follow this pattern, with Caesar from the excellent trilogy of Planet of the Apes prequels being my personal favorite example of this. I'll never forget how Caesar's cry of "NO!" in Rise of the Planet of the Apes inspired a wave of awed silence in the theater. Rise had actually followed Caesar as a person, following his hopes, fears and relationships with other people. He was an engaging character, not just a vehicle for explosions. That's how you get a CGI primate to leave a packed auditorium of people absolutely captivated. Caesar and Rocket follow in the footsteps laid by Yoda in terms of making the unreal absolutely real. Through these characters, state-of-the-art visual effects are used as a tool to bring viewers closer to a character rather than just a flashy demo reel. After all, VFX advancements come and go. Characters like Yoda that make the unbelievable so believable, though, those stick around forever.
Posted by Douglas Laman (NerdInTheBasement) at 11:26 AM