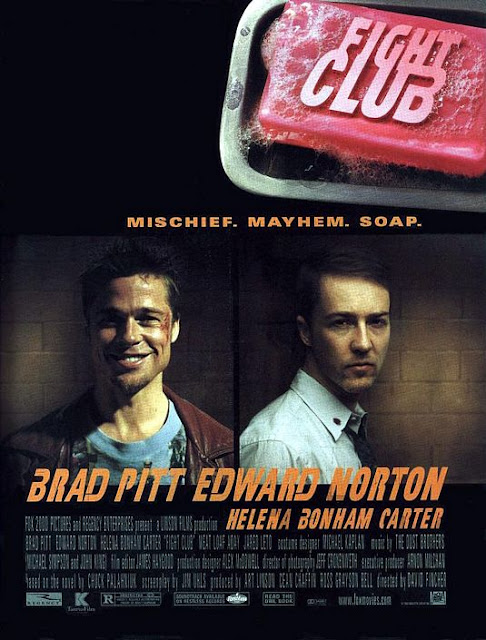 David Fincher is an unusual entry into the canon of modern-day acclaimed auteurs. He's a widely-revered filmmaker, and rightfully so, but he tends to eschew the types of movies that usually garner American filmmakers their enormously influential reputation. Fincher is known for his grimier thrillers that don't ease up on the blood or the violence. The Girl with The Dragon Tattoo, Se7en, Gone Girl, Fincher loves seedy cinema. Considering his exceptional batting average as a filmmaker, thank goodness for his fascination with these darker corners of storytelling. Heck, the fact that his lone dud, The Curious Case of Benjamin Button, was a much more traditional drama indicates why Fincher stays in this lane so often.


Maybe Fincher's most famous thriller exercise is the 1999 film Fight Club. Based on a book of the same name by Chuck Palahniuk, Fight Club stars an unnamed Narrator played by Edward Norton. Much like with the similarly unnamed lead characters in Rebecca and The Woman in the Dunes, the lack of a name for Fight Club's Narrator is meant to make the character a stand-in for a larger issue. The psychological experiences of Narrator could happen to anyone and not just one specifically named fictional character. Taking one look at anything written by a Men's Rights Activist or a member of the current Presidental administration will remind one how widespread the Narrator's warped psyche is.

Anywho, Narrator is working a routine office job, has a cushy apartment, he lives what he perceives to be the conventional American life. But he craves something more. Unable to emotionally connect with others, Narrator begins crashing meetings for groups dealing with issues like testicular cancer, deadly diseases or alcoholism. Even those activities fail to fill the vacant hole inside his system. Then, Tyler Durden (Brad Pitt) walks into his life. Durden and Narrator hit it right off...literally. The two of them engage in a brawl in the parking lot of a bar and it proves so cathartic that they decide to do it again. And again. And again. Each time, more and more people join their skirmish until they're able to create their own Fight Club, which quickly becomes about way more than fighting.

In the years since its release, toxic dudebro’s have glommed onto Fight Club. That phenomenon gets darkly humorous considering that, in the years since its release, Fight Club's perverse sense of humor at the expense of its lead characters has only gotten more biting. Rooted directly in the "angst" of cis-het white male rage circa. 1999, Narrator and Durden's complaints about the the-then modern world only get more and more reflective of First World Problems as the years go by. Durden's somberly intoning that his generation is lost without any wars or financial depression emerges in 2020 as a piece of dark humor showing how warped this guy's perspective is. He's so privileged and cut-off from actual hardships that the horrifying everyday realities of 2020 are something he yearns for.

The irony regarding the behavior of devotees to Durden's philosophy has similarly only gotten more incisive with age. People who swore off traditional society because it was too "conformist" now march around at the beck and call of Durden, wear the same clothes and speak in chants about their leader. They've traded one form of conformity for another. One can't help but be reminded of modern-day people following folks like Donald Trump because of him being "an outsider" when he's just another rich white guy only out for himself. The idea of following leaders like these guys because they're "challenging the system" is a total lie. To follow Durden or Trump is to follow the same status quo, it's just that now you're even more sheltered from the adverse consequences of their actions.

Fight Club's social commentary is certainly thoughtful and has aged much better than many other late 1990s contemplations on American society (for example, American Beauty is nails-on-a-chalkboard bad even apart from everything related to its lead actor). Still, Fight Club's exploration of toxic masculinity run amuck can't quite sustain its 139-minute runtime. By the end, even a big twist regarding what's been going on in the rest of this story can't mitigate the fact that Fight Club is starting to just repeat itself. Fight Club has a lot to say about Generation X men but not quite enough for its runtime. Even though it begins to run out of gas before the credits roll, Fight Club still proves a lively watch, especially because of David Fincher's consistently creative camerawork.

Rare is the scene where Fincher doesn't have the camera positioned or placed in a way that won't have you going "Oh, wow, neat!" The camerawork for the fight scenes is especially impressive as Fincher places the viewer into the middle of these duels without resorting to visual coherency. Intensity is communicated to through relentless shaky-cam but through what the grisly actions say about the characters. Meanwhile, the pair of lead performances nicely reflect the wannabe machismo of Fight Club's protagonists. Edward Norton particularly excels in regards to the narration, his delivery of lines like "I am Jack's utter lack of surprise" are dripping with unnecessary self-seriousness. Narrator is constantly dropping these oddball phrases with all the gravitas in the world and Norton handles that comedic juxtaposition so well.

Fight Club isn't my favorite Fincher (I doubt anything will ever topple The Social Network) but God, twenty-one years later, it's still really good. Grab a friend (maybe a penguin?) and give this dark comedy a watch.

*= Though I have read a queer-coded interpretation of this entire movie that's utterly fascinating to read. The fact that such an interpretation can even exist is a testament to how well Fight Club pulls off its ambiguous nature.
Posted by Douglas Laman (NerdInTheBasement) at 10:51 AM