Trust Me, The First Season of Trust Has Pacing Problems But Also Has Excellent Performances 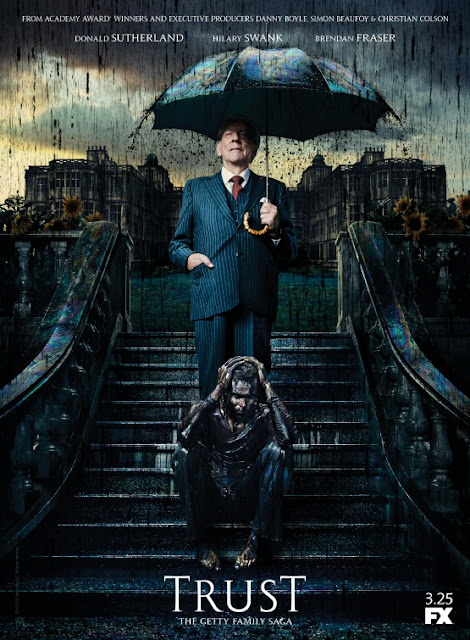 In the grand tradition of Armageddon & Deep Impact and Volcano & Dante's Peak comes two rival projects about the J. Paul Getty III kidnapping, the newest instance of Hollywood inadvertently releasing two pieces of high-profile media that cover the same general topic. The first of these entities arrived in the form of a Ridley Scott directed movie called All The Money In The World and was released this past December. It was a pretty good thriller that got a lot of mileage out of a great performance by Michelle Williams and placing a heavy focus on her character's perspective as she tries to navigate a high-stakes hostage situation.

This real-life kidnapping snafu gets covered again in the first season of the FX series Trust, which aims to differentiate itself by being more about the Getty men and how the kidnapping ties into long-standing feuds within the family. The richest member of this family, by far, is the original J. Paul Getty (Donald Sutherland), an exceedingly wealthy man who spends as little as possible and has basically abandoned his now grown-up children. One of those children has had a teenage son, J. Paul Getty III (Harris Dickinson) that this elderly Getty actually took a shine to prior to learning that this youngster is partaking in drugs and has a massive debt to be paid.

Now that he knows his grandfather's fortune won't be able to be used to pay off his debts, J. Paul Getty III concocts a fake kidnapping scheme to help him and his friends get the money they need. If young Paul is held for ransom, surely his granddad will pay up then, right? But things spiral out of control and J. Paul Getty III ends up being kidnapped for real, a turn of events his grandfather has a little interest in. Now the young man's mother, Gail (Hillary Swank), with some aid from J. Paul Getty's bodyguard James Fletcher Chace (Brendan Fraser), is gonna do whatever it takes to get her son back from kidnappers who find endless difficulties in trying to pull off their get-rich-quick scheme.

The primary creative voice behind Trust is Simon Beaufoy, a writer who has frequently worked with director Danny Boyle on a number of projects. Boyle directs the first three episodes of this ten episode long season and his mark is felt in certain areas of these early episodes, most notably in the editing depicting various Getty's in a state of drug-induced euphoria that evokes how heroin-induce highs were depicted in Trainspotting. Similar visual distinctive touches signifying who is directing what episode (most notably Susanna White's affinity for dutch angles) can be found throughout the season, allowing for some welcome visual versatility to be sprinkled in at regular intervals during this ten-hour long story.

Less consistent than the presence of unique filmmaking traits is the pacing of Trust, which is easily its biggest flaw. Like so many modern-day cable dramas, Trust finds itself relying too much on padding or going around in narrative circles just to get itself to ten episodes. Why they couldn't just do eight or nine episodes for this season and then cut out extraneous episodes like Kodachrome or La Dolce Vita? Adhering to the traditional amount of episodes a season of a cable drama is supposed to have hurts Trust's storytelling and especially it's pacing. It's crucial for these kinds of crime thrillers to keep a constantly engaging pace so that the tension emanating from the high-wire stakes that the characters are living with can be properly felt and Trust does stumble on that front for sure.

Luckily, the performances of Trust manage to soar even in the most extraneous of episodes. Hillary Swank reaffirms her status as a true blue acting talent with her wonderful work as a persevering mother in emotional turmoil while Donald Sutherland effortlessly makes the aloof nature of his wealthy character at once transfixing and repulsive. While those two prominent actors add another sterling performance to their resumes, newbie actor Harris Dickinson establishes himself as an actor of note with his wonderful take on J. Paul Getty III, which finds great ways to emphasize how his character really is just a kid way out of his depth in organic and heartbreaking ways. The best episode of this season of Trust, entitled Silenzio, gets so much of its quality from primarily focusing just on his engrossing performance.

But the real star of Trust in terms of acting may be Brendan Fraser. I've been a fan of Fraser for eons now, but I've never seen him do the kind of performance he gives as James Fletcher Chace. Chace constantly talks to the audience like he's an escapee from a Martin Scorsese movie and delivers some of the best dialogue of the season as he delivers wry knowing commentary on the events that are transpiring. It's such an energetic and exceptional performance whose only real downside is that that I wish it was around more in this season. More of Trust could have used the inventive and riveting nature of Brendan Fraser's performance, but Fraser's work as well as numerous other performances and various aspects of the directing & writing, help Trust stand out as more than just the A Bug's Life to All The Money In The World's Antz.
Posted by Douglas Laman (NerdInTheBasement) at 1:41 PM