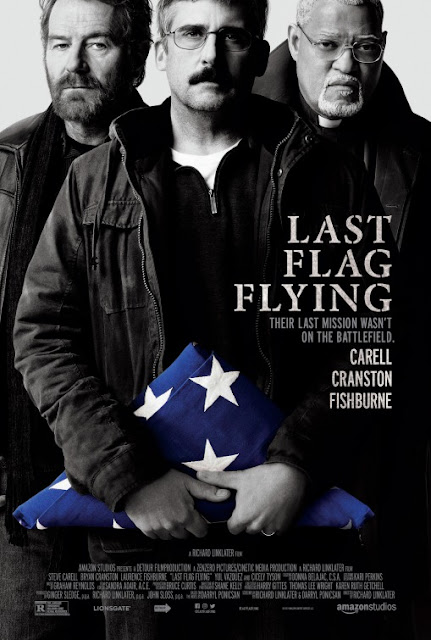 Some of the most famous movies made by director Richard Linklater tend to center on youthful protagonists, like the High Schoolers in Dazed and Confused, the college-aged fraternity boys of Everybody Wants Some!!! or the lead character who inhabits numerous stages of youth in Boyhood. Linklater has a knack for writing both realistic and dramatically involving younger characters, but Last Flag Flying shows he doesn't lose his talents as a screenwriter when he's dealing with older individuals (fellow entries in Linklater's dynamite 2010's run Before Midnight and Bernie are similar showcases for this), on the contrary, he seems to thrive when given the opportunity to explore more life-experienced human beings.


Last Flag Flying, an adaptation of a Daryl Ponicsan novel (Ponicsan also serves as one of the two screenwriters for this feature) set in 2003, finds the reserved Larry "Doc" Shepherd (Steve Carell) trying to track down two of his old friends from his days serving in the Vietnam war. The two friends in question are rambunctious tavern owner Sal Nealon (Bryan Cranston) and reformed reverend Richard Mueller (Laurence Fishburne) and the recently widowed Doc is seeking them out because he wants them to attend the funeral of his late son who died serving in the Iraq war. Nealon and Mueller agree to accompany Shepherd to the burial of his son, a turn of events that end up becoming complicated by the fact that the actual details about how Shepherd's son died might be vastly different from what Shepherd has been told up to this point.

The U.S. government lying about events that transpired in the post-9/11 Middle Eastern war? I know, it sounds unbelievable, but it's the truth. Linklater and Ponicsan's script grapples greatly with the concept of truth in a complex manner that has both the three lead characters coming to terms with how the circumstances of how Doc's son really died to their own problem with covering up a horrible tragedy from their days serving in Vietnam. Lies emerge in forces both big and small in our lives and Last Flag Flying is primarily about how the varying ways these three individual men respond to the presence of said lies in how they carry themselves. Navigating the complexities lies affect these main characters in both larger scale events and more personal matters turns out to be thoughtful storytelling fodder that Last Flag Flying explores with remarkable success.

The film is also mostly about just watching the three lead characters carry on extended conversations in a manner highly reminiscent of Linklater's past movies. Just like his past works, the sight of seeing characters jabber on turns out to be a transfixing one due to the sharply written dialogue that writers Linklater and Ponicsan wisely allow to be the main mechanism moving the story forward. So much of Last Flag Flying is dedicated to just watching Doc, Sal and Richard reconnect after years apart and placing so much emphasis on learning about this trio of human beings end up meaning the viewer becomes fully invested in their journey. The intimate dialogue-driven nature of the proceedings is reflected in Linklater's subdued but thoughtful direction, though such a low-key atmosphere is sometimes undercut by a score by Graham Reynolds that too often ramps up generic sad orchestral music to let the audience know exactly what they should be feeling instead of just letting the dialogue and performances more subtly convey this message.

Speaking of the performances, there's a trio of lovely turns headlining Last Flag Flying, and yes, I am including Bryan Cranston in there. So much of the criticism I've heard directed towards this project tended to stem from Cranston's performance which many saw as hammy and distractingly over-the-top. What just didn't work for those viewers certainly worked for me as Cranston channels a realistic portrait of a guy who is so set in his self-centered no filtered ways that such behavior is second nature to him. I can't tell you how many people I've run into who have the same vocal ticks and physical mannerisms as the ones Cranston puts on here to portray this humorous character who still ends up feeling very much like a real person, with Laurence Fishburne similarly breathing effortless humanity into a role that other actors might have treated as a born-again stereotype.

Cranston and Fishburne are great here for sure, but it's the performance by Steve Carell that really blew me away in Last Flag Flying. Carell is no stranger to playing buttoned-up characters, but the character of Doc makes his titular role from The 40-Year-Old Virgin look like a wild party animal by comparison. Doc is a quiet shell of a man whose loudest vocal pitch is a whisper and Carell is just heartbreaking to watch playing this guy, even when he's just sitting down and not speaking Carell finds way to convey the emotional torment he's going through. This is a performance totally unlike anything else Carell has done as an actor, a profoundly affecting turn that provides a compelling heart to Last Flag Flying, yet another impressively soulful Richard Linklater achievement.
Posted by Douglas Laman (NerdInTheBasement) at 12:02 PM