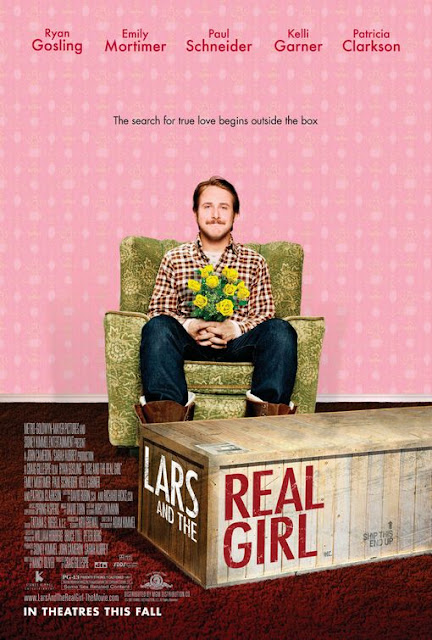 There is, to quote Avenue Q, "a fine fine line" between kindness and schmaltz. The latter element is widely detested and, not unfairly, looked at a manipulative way to generate pathos without actually generating substantive characters or plot details for the audience to get invested in. There are times where I've seen movies that get too schmaltzy for their own good (remember that ending of The LEGO Ninjago Movie that smothered the audience in too many hollow dramatic monologues?), but I'm always gonna root for a movie to charge towards kindness, even if it stumbles along the way. Kindness is such a vital thing in our lives and it's always good to see art championing it. Well-done kindness is one of my favorite things in all of cinema and you can see it in all kinds of movies like The Muppets, Blockers, City Lights or even the 2007 dramedy Lars And The Real Girl.


The titular Lars of Lars and the Real Girl is a quiet fellow constantly covered in layers of clothing who lives in a small shack behind his brother's house and spends his day interacting with others as little as possible. Naturally, such a quirky individual is played by Hollywood hunk Ryan Gosling. Though Gosling can play a handsome fella who can charm your socks off in the likes of La La Land and Crazy Stupid Love, Gosling has actually impressed me the most in his more comedic roles. He plays an awkward detective so hysterically well in The Nice Guys while he lends dramatic commitment to ludicrous premises in a number of his most memorable Saturday Night Live sketches. Just because a joke or premise might be silly doesn't mean Gosling won't deliver the same sort of devotion to that joke or premise that he would to a dramatic role.
Gosling's outstanding ability to provide 110% dedication to absurdity is used beautifully throughout in Lars and the Real Girl. Gosling is able to make Lars feel like a realistically awkward individual in his initial sequences, earning the audiences sympathy and attention all at once, but then when he gets a blow-up doll that he treats like an actual living breathing girlfriend, one named Bianca, Gosling has no problem portraying how head over heels Lars is for this lady. Because of how Gosling portrays the character of Lars as being so thoroughly committed to Bianca, you get numerous moments of enjoyable intentional humor, but because Gosling never plays Lars in a mocking way, you also become invested in this guy's relationship and what it means for his psychological state.

Understandably, Lars' brother, Gus (Paul Schneider) and sister-in-law Karin (Emily Mortimer), are concerned for Lars but decide to go along with the charade while they figure out what exactly is inducing this behavior. It isn't long before the population of the town that Lars calls home discovers his new romantic infatuation and this is where the script by Nancy Oliver makes the wise decision to subvert expectations in a most wonderful manner. Though there's initial hesitance to this relationship Lars is engaged in, soon, Lars neighbors, co-workers and friends alike unite to treat Bianca like a real person. Their response to this unusual situation is to simply help Lars by treating Bianca just like he does.

It's a heartwarming turn of events that leads to the most affecting moments of the movie as well as some memorable pieces of comedy (like an off-hand mention of Bianca being elected to a pivotal position on the local PTA board). Because Lars and the Real Girl has managed to make the world and characters of this story feel real enough and organically builds up to their extended act of kindness towards Lars, such an open display of affection feels totally earned within the story. Allowing the townspeople surrounding Lars to be accepting of his relationship instead of going for the expected route of having conflict stem from his neighbors being unwelcoming to Bianca isn't just a smart and touching story move in its own right, it's also a clever way for the primary conflict in the plot to stem from the internal psychological turmoil of Lars.

In numerous visits with Doctor Bergman (Patricia Clarkson), the audience gets a deeper look into what's informing the relationship between Lars and Bianca as well as what events in the life of Lars could have induced this romance. Ryan Gosling does an excellent job portraying the turmoil Lars is going through in opening up to another person about his internal problems, your heart aches watching Gosling depict a man struggling to allow another person into his head. In addition to serving as showcases for Gosling's talents as an actor, such scenes also demonstrate the talents of filmmaker Craig Gillespie, who serves as the director of this project.

Just as director Craig Gillespie shined a light onto the humanity of the oft-ridiculed media figure of Tonya Harding in his 2017 effort I, Tonya, in Lars and the Real Girl, Gillespie, as well as Nancy Oliver's script of course, turn a lead character who could have been a protagonist of constant ridicule in a lesser comedy and bring them to life in a kindhearted way that emphasizes what informs their unorthodox qualities on a psychological level. Furthering the similarities between I, Tonya and Lars and the Real Girl is that they both have outstanding lead performances that demonstrate the best traits of their lead actors. Even when divorcing Lars and the Real Girl from then-future Craig Gillespie directorial efforts though, there's plenty to chew on in this movie, most notably its most emotionally potent sequences that get much of their power from how genuinely kind they are. Well-done kindness can be hard to execute but it's found in abundance in Lars and the Real Girl.
Posted by Douglas Laman (NerdInTheBasement) at 11:43 AM