Ocean's Thirteen Goes Through The Motions In An Entertaining Fashion 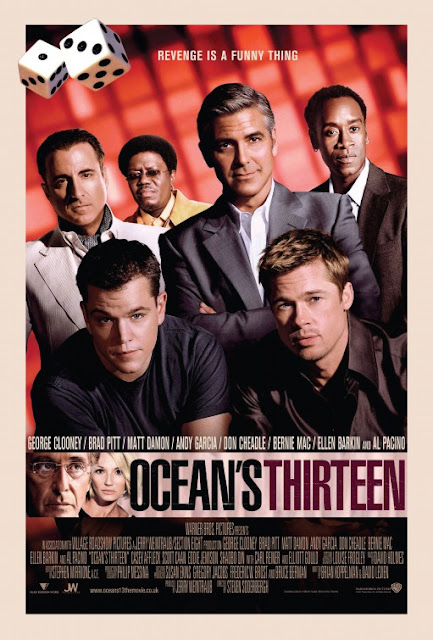 Steven Soderbergh brought his Ocean's Eleven trilogy to a close with Ocean's Thirteen, an adventure that saw the main characters of the prior two movies (save for those played by either Julia Roberts or Catherine Zeta-Jones) embark on a heist spurred by vengeance. After Reuben Tishkoff (Elliot Gould) gets double-crossed by super wealthy businessman Willy Bank (Al Pacino), Danny Ocean concocts a plan to get some revenge on Bank by way of sabotaging the opening of his newest casino resort. This is a plan that's going to require all kinds of elaborate set-up and tricks, all in the name of aiding a friend. Despite all the hard work ahead, the other nine members of Danny Ocean's gang agree to help.


Ocean's Thirteen provides a welcome rebound for this series after the lackadaisical nature of its predecessor. Whereas Ocean's Twelve got way too bogged down in meandering plotlines like one simply about Brad Pitt and Catherine Zeta-Jones making goo-goo eyes at one another, Ocean's Thirteen keeps things lean and simple. The antagonist is made clear from the outset, where Danny Ocean and his friends are pulling off their heist is made similarly obvious and the film doesn't just leave the vast majority of the group off to the sidelines (save for Reuben Tishkoff) like Ocean's Twelve did. All of these are very much good things that ensure a sense of fun is present throughout the proceedings.

Even if one isn't just comparing Ocean's Thirteen to Ocean's Twelve though, one still finds a fun heist movie that knows how to properly use the large cast at its disposal. That cast includes Al Pacino playing a new bad guy who is about as far and away from a subtle nuanced villain as you can get. Pacino, per usual for one of his post-1990 gigs, relishes in hammy acting that fits this particular character and makes him a fine over-the-top adversary for Danny Ocean to choose to go up against. Only real problem to be had in making Willy Bank such a stylized creation is that it highlights how dully written his primary henchperson, played by Ellen Barkin, is.

The script, penned by Brian Koppelman and David Levien, doesn't just go over-the-top when it comes to its main villain, this story frequently makes use of all kinds of heightened plot elements like man-made Earthquakes that frequently threaten to push the proceedings over into the wrong kind of outlandish, but for the most part, such wackier facets of the story manage to just provide their intended storytelling purpose without upending things. A better side of Koppelman and Levien's writing for this project can be seen in how cleverly they tie up all loose ends throughout the third act, the pay-off to how this heist manages to get pulled off is certainly quite a feat to see.

Both director Steven Soderbergh and the majority of the main cast members seem to be going through the motions here as they realize just what audiences want and aren't about to disrupt the process of giving people just that. That does rob Ocean's Thirteen the chance of being its own unique creature, but Soderbergh's fleet-footed heist movie filmmaking and charming turns from the likes of Brad Pitt and Matt Damon are always enjoyable to some degree no matter how matter how calculated they are. Nobody really strains themselves to reinvent the wheel for Ocean's Thirteen, but nobody also falls flat on their face in pulling off this entertaining romp that closes out this particular tirlogy of films on a satisfying if overly conventional note.
Posted by Douglas Laman (NerdInTheBasement) at 4:32 PM