Hotel Artemis Is An Unusual But Delightful Getaway Spot 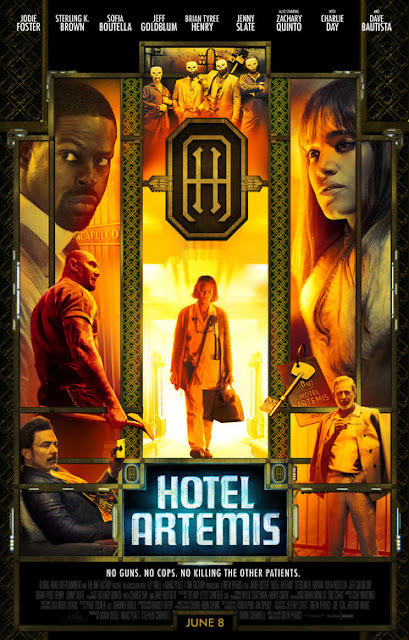 I've stayed in a number of oddball hotels in my life, including one located somewhere in Texas that totally felt like the sort of location that characters go to get either arrested, shot or both in a Coen Brothers movie, but I've never stayed at a hotel like the Hotel Artemis, a hospital/hotel exclusively for criminals located in Los Angeles in the near future. It's a place run by The Nurse (Jodie Foster) and her dutiful assistant Everest (Dave Bautista), who take care of any criminals who need some under-the-radar fixing up so long as said criminals have an official membership. The newest people to check into this hotel are bank robbers Sherman (Sterling K. Brown) and his intensely damaged brother Honolulu (Brian Tyree Henry).


They and other unique figures have come to stay at the Hotel Artemis during the middle of a gigantic riot consisting of the poor turning on the rich. All of the chaos outside cannot be kept at bay for long, especially when the hotel's owner, The Wolf King (Jeff Goldblum), wants some immediate care, and individual character motivations begin to race towards each other as the night goes on. This is a premise that writer/director Drew Pearce see's as an opportunity for primarily memorably daffy character interactions informed by political overtones. Pearce comes up with a whole assortment of off-the-wall wrongdoers for his cast to inhabit and luckily, he's working with a cast well-experienced with selling offbeat material, which really makes all the difference in the world.

Take Sterling K. Brown for instance. Here's a man whose mere presence suggests gravitas, when he speaks, he doesn't need to even raise his voice to get your rapt attention, just his normal speaking voice will do nicely, thank you very much. This serves him well in conventional dramatic material, but in a film like Hotel Artemis, it means he's got the engaging conviction necessary to get you invested in what kind of manic tomfoolery his character will get into next. This is a role that, as written, is bog-standard in many respects, but when you've got Sterling K. Brown to bring said role to life, well, suddenly you've got a role filled with more assuredness and distinctiveness.

The rest of the cast has a similar flair for elevating occasionally middle-of-the-road writing, from Jodie Foster doing great work in a lead role to Sofia Boutella getting one of only a few post-Kingsman roles that actually take advantage of her talents as an actor to Dave Bautista cementing himself as one of the more interesting character actors working right now in a role that feels totally fresh compared to his already versatile blockbuster performances in the likes of Guardians of The Galaxy and Blade Runner 2049. Drew Pearce deciding to just turn over much of Hotel Artemis to dialogue-heavy scenes like Sterling K. Brown and Sofia Boutella discussing some jewels trapped inside a pen turns out to be its best move, these heightened characters really come to entertaining life in the hands of this cast whose only real lackluster spot is Zachary Quinto as a character stuck with some really cringe-worthy expository dialogue.

Poor Quinto gets saddled with the worst examples of that kind of dialogue, though there's a bunch of it scattered throughout Drew Pearce's script that does have a tendency to tell and now just show. Pity that because there are a number of subtly incorporated bits of world-building here that show some real craftiness on Pearce's part as a writer and he does well with juggling numerous character motivations without having it bog down the momentum of the story. Also kudos to him for actually working in some explicit political subtext regarding financial inequality into the proceedings, including making one of the most explicitly evil people in the film a character played by Charlie Day a guy whose ramblings about how the poor deserve to be poor might as well have been cribbed wholesale from a rant you'd find on your average politically themed Reddit threat.

Pearce also makes his directorial debut on this project and he provides some solid work behind the camera, particularly in knowing how to do some coherent camerawork to capture the minimal amount of action scenes. I'm sure the lack of action will irritate some viewers who come into Hotel Artemis expecting only a bloodbath, but that's not what Hotel Artemis is really trying to be. It's trying to be its own quirky little thing and I found the sight of a bunch of talented actors inhabiting a horde of wacky characters who could have come out of a B-movie from the 1970's to be entertaining enough to help mitigate the problems it encounters in attempting to establish its own unique personality. Hotel Artemis provides an entertaining stay with some talented performers and its certainly a better getaway than that one hotel ripped straight out of a Coen Brothers movie I once stayed at!
Posted by Douglas Laman (NerdInTheBasement) at 8:37 AM