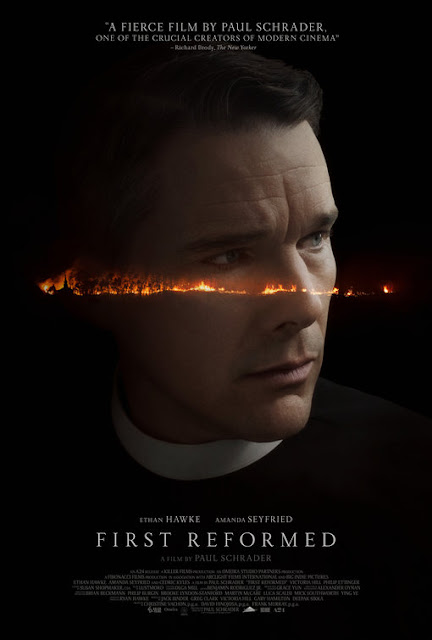 If you were to do a film festival dedicated solely to films that serve as morose meditations on man's relationship with God, you'd have plenty of high-quality options to choose from. Ordet would certainly be an option, ditto for Au Hasard Balthazar. If you're looking for modern-day examples, well, let's totally throw Noah and Silence in the line-up too, those two movies never get enough love. Another recent movie that totally should be included in this theoretical film festival hails from director Paul Schrader and is entitled First Reformed. If you're wondering if First Reformed is bleak enough to join the likes of Au Hasard Balthazar, trust me, it most certainly is.


Reverend Ernst Toller (Ethan Hawke) lives a quiet life. He delivers his weekly sermons at the First Reformed church and serves as a tour guide for tourists looking to check out the 250-year-old establishment. Beyond that though, he mostly just mourns for his deceased son and struggles with his relationship with God. Though he keeps mostly to himself, he does not refuse Mary (performed with a haunting quality by Amanda Seyfried in one of her best performances), a regular attendee of the church, when she asks if Toller can talk to her husband, who's been acting strange lately. Turns out her significant other has become absorbed in how badly human beings have treated our planet and feels like someone somewhere should do something drastic about it.

This is far from the first time Toller has heard this kind of talk, but as First Reformed progresses and Toller becomes reminded of just how corrupt & seedy everyday people can be, he becomes more and more convinced that maybe Mary's husband is on to something. Maybe our world is permanently damaged by the actions of mankind and maybe somebody ought to do something about that. Focusing on a lead character convinced that the world around him is going to hell and that only he can stop it is a concept Schrader explored to great effect when he wrote the script for Taxi Driver more than four decades ago, but First Reformed is not just a retread of that Martin Scorsese directed film, far from it.

Most notably, Travis Bickle (the protagonist of Taxi Driver) and Ernst Toller are vastly different personalities. Bickle is, from the get-go, convinced he's better than those around him and that the world itself is hell whereas Toller gradually becomes a similar character over the course of the entire story, though even by the end of First Reformed, Travis Bickle is far from one's mind when watching what Ernst Toller has become. This character has so thoroughly become its own creation that any thematic similarities he holds to lead characters in prior Schrader screenplays become just an interesting bit of trivia rather than a symptom of repetitive writing.

The character of Toller becomes so captivating to watch due to how much Schrader excels in detailing the kind of tragic transformation this character undergoes throughout First Reformed. Establishing right from the start of the movie that Toller is jotting down his internal thoughts about events transpiring around him into a journal that the audience gets to hear via voice-over is a fantastic way for the audience to get inside Toller's head. This is a character whose defining characteristic at the start of the story is being buttoned-up and closed off from the world and incorporating brilliantly executed pieces of voice-over like this allow Toller to maintain that type of introverted personality to characters around him without robbing the viewer of the chance to get to know him better.

There are all kinds of thoughtful elements like this voice-over element found in Schrader's writing, especially in the dialogue, which is so finely crafted in the various tete-a-tete's that Toller has with the people around him. Maybe best of all though in Schrader's writing is how it handles the depiction of Toller's relationship with God. The way Toller acts here as someone who preaches the Gospel but has a hard time letting it into his own personal life is like the complete opposite of how a skeptic of Christianity is treated in a God's Not Dead movie. Toller's woes are rendered in a realistic fashion that eschews judging him in favor of just exploring what informs his theological thought process. The way theology becomes intertwined or paralleled in his actions during the second half of the movie only enhances the fascinating way First Reformed grapples with religion.

It's not just in the writing that Schrader demonstrates real artistry though, he also makes the small-scale dialogue-driven First Reformed a visual tour de force. Filmed in a 1:37:1 aspect ratio that shortens the width of the frame exponentially, Schrader offers up carefully crafted pieces of blocking & staging that show a keen awareness for how much space this aspect ratio offers. All throughout First Reformed you get numerous examples of quiet conversations between characters that have clearly shown a lot of attention to detail in terms of the physical relationship between characters. The result of these intricately arranged sequences is that First Reformed carries a visual style that sticks in your brain as powerfully as the movies bleak tone.

Paul Schrader's work as a director and writer here is tremendous, but no assessment of First Reformed as a whole is complete with offering praise towards Ethan Hawke, who delivers excellent work portraying the troubled mind of Ernst Toller. I was already head over heels for Hawke's performance early into the movie thanks to how well he juxtaposes his meek physical performances with more conviction-filled voice-over, he sells both contrasting elements so well that it's a jarring delight to see them put together. But as the film goes on, Hawke becomes even more entrancing as he portrays Toller's growing realization of how truly corrupt the world around him is. Best of all, neither Hawke's performance nor the story itself offers a tidy climactic cop-out for the bleak storyline Toller is going through and that works as a boon for both elements of First Reformed. Fully commiting itself to such a somber story allows First Reformed to feel like an ancestor to classic unflinchingly dark movies about religion like the aforementioned Ordet and Au Hasard Balthazar.
Posted by Douglas Laman (NerdInTheBasement) at 1:52 PM