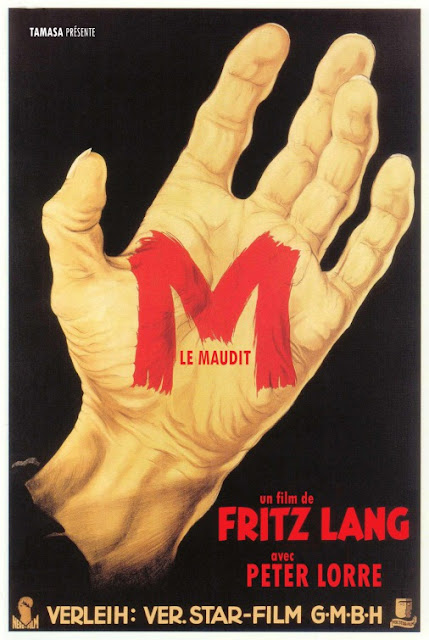 Some movies are declared to be character studies, but Fritz Lang's 1931 feature M strikes me more as a larger-scale societal study. Though individual characters are found throughout the story, M is more concerned with examining how individual large pockets of society react to the prospect of terror occuring in their midst rather than just focusing on how one person reacts to such horrifying circumstances. Specifically, those horrifying circumstances are that someone in the city of Berlin, Germany is kidnapping and killing children. This is a tragedy that sends all of the residents of Berlin, Germany into a frenzy as they try to figure out who exactly could be behind such vicious slayings, with the police officers and the criminal syndicates of this town each having their own agendas in wanting to bring this killer to justice.


In keeping with this being a societal study (copyright pending on that phrase!), we get to see how these two segments of Berlin, Germany as well as other parts of the population such as potential suspects, parents and the wealthy react to how there's a child murderer on the loose and anyone could be behind such gruesome acts. This means an air of haunting uncertainty permeates the proceedings as everyone, even just kindly gentlemen trying to help young girls find their way home, become immediate suspects in the eyes of a paranoid public. In the process of trying to bring a murderer to justice, the various residents of Berlin, Germany are turning on one another in hopes of reinstating normalcy to their lives.

This bleak way of living is conveyed visually in a masterful way by Fritz Lang, whose work behind the camera and in the screenplay (which he penned with Thea van Harbou) cements just how gripped with fear this once conventional location has become. The depiction of police forces grossly misusing their power in order to bring the murderer to justice is especially frightening as innocent civilians have their houses ransacked and get questioned at local taverns. Lang smartly shows this already terrifying child murderer as having a domino effect of sorts in terms of instigating further fear into the populace; it isn't just an unknown killer the locals have to fear now, it's also an unruly police force they have to be petrified of.

Though both the general public and the police have no clue who could be behind the assorted killings, the viewer gets to find out about halfway through M who exactly is behind these slayings. The culprit is Hans Beckett, played by Peter Lorre, a man who was like the Michael Shannon of his time in terms of being frequently cast in unsavory roles but managed to have so much talent as a performer that he was able to make each of these parts distinctly unique. Here, Lorre makes someone quite different from the characters he portrays in then-future films like Casablanca or The Maltese Falcon by making Beckett a coward to his very core. Lorre forgoes attempting to imbue even a trace of slippery charm to this character, instead choosing to just make Beckett a detestable creation through and through.

Lorre's excellent lead performance is driven by a pervasive sense of cowardice that's demonstrated ably in a silent sequence where Beckett evades people (who are aware of him being the child killer) following him. It's a visual-centric scene that makes great use of Lorre's depiction of Beckett as a frenzied individual driven by an animalistic instinct to evade capture at any cost as well as Fritz Lang's sense of how to properly utilize space as a filmmaker. Lang knows how to subtly and effectively emphasize the cramped geography of the scene to highlight just how trapped Beckett is in this scenario. This is one of M's best sequences and it's thankfully not the only time that Lang allows the dialogue to take a break and just have the visuals of M take over.

It's interesting that some of the showstopper sequences of M are ones eschewing dialogue since this was the very first directorial effort from Fritz Lang to not be done as a silent film. Though his visual-based skills as a filmmaker that served him well in silent movie masterpieces like Metropolis is alive and well here, Lang also gets plenty of mileage out of the auditory-based techniques that non-silent cinema offers. A climactic trial sequence, especially, has some of its best moments stemming from memorably written dialogue exchanges that Beckett has with the general public who want to see him dead while the unforgettable final moments of the film have a woman offering a plea to the audience itself in saying that "One has to keep better watch over the children...all of you". It's an appropriately chilling moment of encouraged introspection that show how well Lang is able to use new technological filmmaking innovtations (specifically sound) to enhance films like the haunting societal study M.
Posted by Douglas Laman (NerdInTheBasement) at 11:31 AM