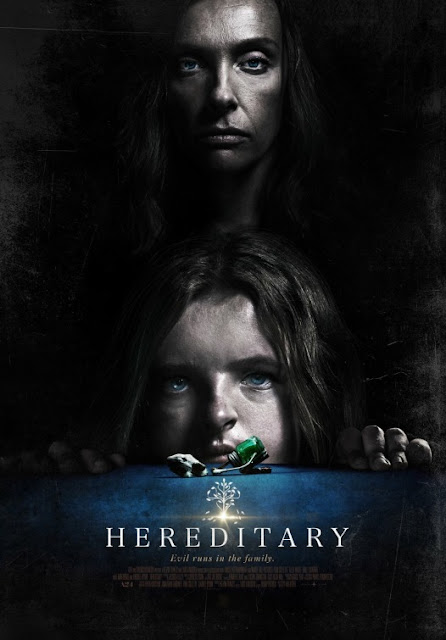 A constant refrain from director Brad Bird is the simple truth that animation is not a genre, but rather, a medium of storytelling. Horror is similar to animated tales in this regard in that movies belonging to this format of storytelling are largely seen as being highly similar to one another whereas the truth is many different types of stories can be told in horror-based filmmaking. You can do an action movie in a horror story, you can do a comedy, you can do a psychological thriller, you can do all sorts of different types of filmmaking while engaging in the process of scaring people. The versatility of horror films as an art form gets reinforced once again in Hereditary, the feature film directorial debut of Ari Aster and a motion picture that functions more as an examination of a families psychological turmoil in response to loss than what might be considered a conventional horror movie.

The family in question is the Graham's, consisting of mother Annie (Toni Collette), father Steve (Gabriel Byrne), older brother Peter (Alex Wolff) and younger sister Charlie (Milly Shapiro). The family is in the process of grieving the recent death of Annie's mother, an emotional process that's proving to be highly complicated for Annie due to the strained relationship she had with her frequently cruel mother. An already trying time is made worse by the erratic behavior of her two kids, particularly Charlie. I'm not gonna ruin any more plot details beyond that, but from this starting point, Hereditary creates a captivating story about how exactly Annie copes with the kind of emotionally harrowing death she's dealt with too many times before.

While I won't divulge spoilers, I will reveal that Hereditary is very much its own creature in fascinating ways. Most notably, director Ari Aster has a phenomenally-realized style of filming that emphasizes extensive long takes with the camera frequently placed a good deal of distance away from the characters. This recurring technique is subtly implemented, but its impact on the production is felt without question and it's far from the only part of the camerawork in Hereditary that shows impeccable craftsmanship. There are all kinds of creepy pieces of imagery in here that are as meticulously put together as the small figurine models that Annie crafts for her job.

Placing the camera so far away from the characters is also a subtle way of visually reinforcing how much of a distance Annie, Charlie and Peter are putting between each other in their everyday lives as they engage in all sorts of secret activities (like Annie attending an AA-style meeting for people coping with loss or Charlie's disturbing antics). There's a large amount of distance between the members of the Graham family, why shouldn't there also be distance between them and the camera filming their actions? The same high level of thought going into capturing the various dynamics in the troubled Graham household on a visual level is also found in the remarkable character work within the screenplay, which has also been done by Ari Aster.

Some horror films get their scares from blood n' guts, others get it from the mere sight of gruesome monsters, but Hereditary gets the majority of its scares from simply following recognizably awful scenarios that plague this poor family, the kind of situations we all know can happen but pray to God every day they don't transpire. So much of the horror in Hereditary stems from everyday horrifying circumstances as well as the responses the characters have to said circumstances. There are all kinds of great examples of just how scary it is to watch characters express their responses to plausible gruesome calamities, but one example, in particular, haunts me just thinking about it.

The scene in question depicts a distraught Annie on her knees on the floor bellowing out "I WANT TO DIE!" repeatedly, a verbal manifestation of her internal response to an endless succession of turmoil. It may sound simple conceptually, but it's a horrifying moment to watch because of just how recognizable it is. We've all been in this state of mind in a time of immeasurable grief, that tremendous sorrow we all try to hide away from the world but writer/director Ari Aster frequently depicts as a key element of his horror feature. To boot, tapping into this manner of responding to a cataclysm doesn't feel exploitative in Hereditary simply because the individual characters are so well-rounded. A character like Annie Graham isn't just here to provide overt demonstrations of overwhelming grief for the viewer to gawk at, such demonstrations are at the service of larger-scale character arcs.

Annie Graham herself is portrayed by Toni Collette, no stranger to horror movies in her career between The Sixth Sense and Krampus. Collette does work here quite unlike anything else I've seen her do in the rest of her filmography as she brings to life such a challenging character. There are all sorts of layers to this character, as exemplified in an early scene where Annie Graham publically details the complicated relationship she had with her late mother, and Collette handles such an intricately rendered character beautifully to the point that one can organically feel both terrified for and terrified of Annie Graham. Alex Wolff does similarly exemplary work as Peter, a character who has to grapple with a large amount of dark storylines and personal demons that Wolff handles nicely, he helps makes Peter's internal struggles immensely captivating to watch.

Wolff and Collette are excellent on their own, but it's especially commendable just how well they work together, there's a number of crucial scenes here hinging on the two's interactions (especially a pivotal dinnertime argument sequence that had me glued to the screen) and this duo of actors perform exceptionally together, creating a fractured mother/son dynamic that feels very much tapped into reality. Channeling realism here and in the majority of Hereditary results in lots of thoughtful thematic material for this story and these characters to cover, but most importantly of all, it results in some of its most terrifying moments that, to quote the George Jones song The Grand Tour, "...I know will chill you to the bone."
Posted by Douglas Laman (NerdInTheBasement) at 6:17 PM