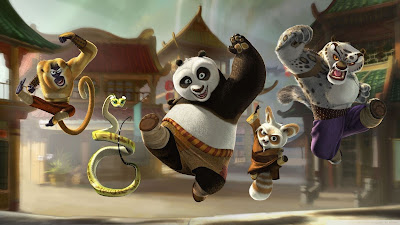 Twenty years ago, DreamWorks Animation started off with a clear goal in mind: become the first American animation studio that could rival Disney in the realm of animated motion pictures. After all, they had the former of Disney animation Jeffrey Katzenberg, steering the ship, that alone made people think this could work. The studio started off on an ambitious note with grandiose titles like The Prince of Egypt that had a scope of storytelling and darker tone separated from animated fare from Disney. But ambitious dramatic fare (as well as using hand-drawn animation) was put on the backburner once Shrek became easily their biggest movie. Suddenly, comedies crammed with celebrities and bathroom humor were the go-to movies for the studio and there was no going back.


Modern-day DreamWorks Animation fare like Home, The Boss Baby and Trolls adhere strongly to this formula (which has produced good movies like the first two Shreks, Over The Hedge or last year's delightful Captain Underpants movie), with the result frequently being movies that are middling artistically but usually successful financially. But there are tonal outliers to the default DreamWorks Animation style, perhaps the best being 2008's Kung Fu Panda. Released to movie theaters ten years ago today, Kung Fu Panda was a sharp departure from the DreamWorks Animation movies that would come before and after it. Just seven months after they released a movie where Jerry Seinfeld was a wise-cracking bee, here was DreamWorks Animation making a film that actually tried to be thoughtful, showed real craftsmanship in its camerawork and even put a big name celebrity playing the lead role to good use.

Jack Black may be the secret weapon that ties Kung Fu Panda together with a warm lead vocal turn that allows the actor to explore his gift for subtle acting. Yes, Black is known for his hyperactive wild rocker man roles, but in films like Bernie, School of Rock and last year's Jumanji: Welcome To The Jungle, it's the subtle details in Black's performances that make those characters come to life. Such small-scale details abound in Black's vocal turn as Po the Panda, which include Black's wise decision to play the character as an excitable geek without an ounce of cynicism in his body. This means there's an endearing sense of determination in Black's voice work that makes it impossible not to root for this guy and his seemingly impossible quest to become a kung fu master.

Just as Jack Black exceeds expectations with his excellent work in the titular lead role of Kung Fu Panda, so too do the various action sequences go way beyond the norm for what one might expect. I distinctly remember in the DVD audio commentary for Kung Fu Panda that one of its two directors (those two directors being John Stevenson and Mark Osborne) remarked how their goal with the action sequences was to directly compete with the spectacle seen in PG-13 live-action blockbusters being released that summer. Thus, we get a number of showstopper fight scenes here that show a real imaginative flair (love that moment where Tai Lung uses a bridge he's been entangled in to his advantage) and make use of highly elaborate and imaginative camerawork. Despite being a PG-rated family movie, Kung Fu Panda makes the wise decision to not skimp on the action sequences showing off the fighting prowess of these critters.

Knowing how to use a celebrity voice-over to actually enhance a character and well-executed action sequences are just two ways Kung Fu Panda manages to differentiate itself from the majority of its DreamWorks Animation brethren. Perhaps most noticeably, it's the first DreamWorks Animation project since the original Shrek to actually allow time for quiet dialogue exchanges that bolster the depth of our lead character. This is especially true of any instance where a character talks with the wise master Oogway (Randall Duk Kim), this sage turtle is responsible for some of the most contemplative and heartfelt moments of the project, particularly in a conversation with Po under a sacred peach tree.

Jack Black is hilarious as Po and the action in Kung Fu Panda is fun to watch, but it's in these quiet moments of character-driven pathos that Kung Fu Panda really establishes itself as something special. Such an emphasis on poignancy is especially prevalent in the film's crafty handling of the Chosen One narrative. Like many protagonists before him, Po is a figure (known here as The Dragon Warrior) destined to bring balance to his valley, though the script reveals in the third act that the mystical scroll meant to reveal to Po how to become the Dragon Warrior is actually blank, there's only a reflective surface on this scroll which Po soon realizes is meant to signify that all one needs to become the Dragon Warrior is to be yourself.

Goodness knows this is far from the first time that the angle of "Be Yourself" has cropped up as a solution for the protagonist in a family film, but in the context of how it's handled in this story, it feels like a wonderful capper to Po's journey. Writers Jonathan Abiel and Glenn Berger infuse the screenplay for Kung Fu Panda with a number of these kinds of clever storytelling turns as well as making sure there are plenty of places in the story for the riveting action and terrific cast (which includes a delightful turn from James Hong as Po's goose father) to shine. All of these ingredients mix together beautifully in the delectable soup that is Kung Fu Panda, which, aside from an end credits rendition of Kung Fu Fighting by Cee-Lo Green, hasn't aged at all in the ten years since it's initial theatrical release.
Posted by Douglas Laman (NerdInTheBasement) at 11:56 AM