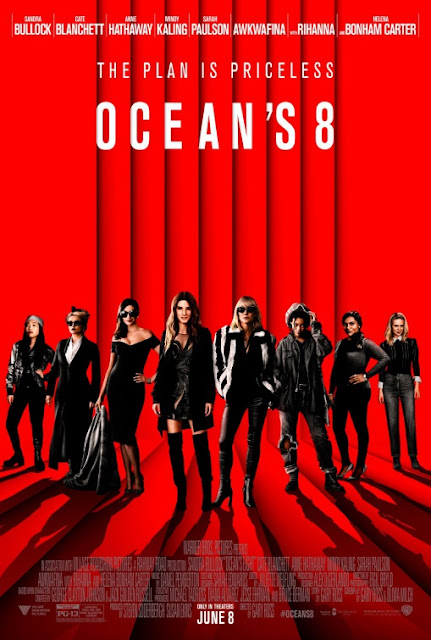 Director Gary Ross proves to be a far better filmmaker helming Ocean's 8 compared to his last two directorial efforts The Hunger Games and Free State of Jones, both of which, particularly the latter disaster, suffered from amateurish direction that heavily stilted the already struggling stories they were bringing to life. However, Ross as a filmmaker still finds himself struggling with Ocean's 8 as he (along with the cinematography by Eigil Bryld and some of the editing by Juliette Welfling) channels the visual style and rhythm of Steven Soderbergh's Ocean's Eleven trilogy in a manner that ends up feeling evocative of those three films without ever being fully accurate or satisfying. It's so familiar yet distinctly not the same, it's like, as Jenny Nicholson once put it in describing a Porg toy from Target, "...waking up to everything in your house shifted a few inches to the right."

Even if one forgets that key visual aspects of Ocean's 8 like the directing are trying and coming up short in evoking the visual style of prior Ocean's movies, the feature still struggles with satisfying shot compositions and thoughtful editing. That's a real shame because, otherwise, Ocean's 8 is actually an overall pretty enjoyable movie! The film may struggle to channel its predecessors on a visual level, but it finds itself working better in terms of tone, plot points, and in plain o'l fun mostly by being more willing to carve out just enough of its own identity on those fronts while also keeping critical elements of the heist movies that came before it.

Our lead for this adventure is Debbie Ocean (Sandra Bullock), the sister of previous series protagonist Danny Ocean, who has just gotten out of prison and reunited with best pal Lou (Cate Blanchett). Debbie's got a plan: she wants to rob some precious jewels from the Met Gala, a heist that's gonna need some help to pull off. The other members she lures in to pull off this heist are played by an all-star cast of actors consisting of Helena Bonham Carter, Sarah Paulson, Mindy Kaling, Rihanna and Awkwafina, while Anne Hathaway plays a snooty movie star who proves to be an obstacle standing between them and their fortune. Thorin Oakenshield A.K.A. Richard Armitage is also around as a nasty ex-boyfriend of Debbie Ocean as is Peter Rabbit A.K.A. James Corden as an investigator.

Ocean's 8 is like a magic trick you know too well being performed by a grade-A magician; you may know how the trick gets pulled off, but damn it if the execution of pulling off that familiar trick isn't enough to still keep you at the edge of your seat. If you're willing to trade bolder storytelling for reasonably diverting entertainment, you're gonna be like me and have a good time, especially since the ensemble cast are a whole lot of fun to watch bounce off each other. Stand-out's among the leads are Awkwafina as the scene stealer of the bunch while Cate Blanchett extends her recent run of strong performances as Debbie Ocean's confidant.

Sandra Bullock also turns out to be a nice choice to headline the project as she conveys the kind of moxie and magnetic spirit you need to portray someone who serves as the leader in any heist operation. A good cast goes hand-in-hand with a solid script by Gary Ross and Olivia Milch that may lean too heavily on the previous Ocean's movies, but as said earlier, there are just enough new ideas brought to the table as well, namely in the more fleshed out character dynamics, which do end up making the individual members of Debbie Ocean's gang feel more like people than the majority of the members of Danny Ocean's crew ever did. The trade-off for a less audacious storyline this go-around is that you become more interested in the individual characters, which feels like a not ideal but fair enough outcome.

Best of all, Ross and Milch's writing delivers just what I want out of any good heist movie when the third act is winding down, namely, fun examples, usually coming in the form of payoff for previously established story or characterization elements, of how the main characters are planning to pull off a seemingly impossible heist. There's a delightful thrill in watching the puzzle pieces, if you will, start to come together in the climaxes of these heist movies and Ocean's 8 has some real fun in making everything come together nicely once the final rolls around. It's too detrimentally familiar in some ways, namely in its visual facets, but Ocean's 8, does pull off a heist that's enough fun for me to declare it the second-best of the 21st century Ocean's Eleven movies. And if we can get, like, Rachel Bloom to join the crew for the inevitable Ocean's Nine, I'd bet they'd have a good shot at managing to make the best of these movies yet!
Posted by Douglas Laman (NerdInTheBasement) at 1:42 PM