Book Club Is As Paint-By-Numbers As It Is Enjoyable 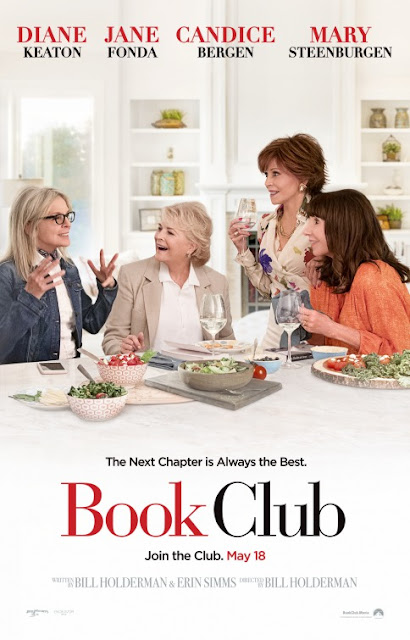 Book Club is a predictable affair in many respects, that much is true. But just as The Force Awakens took a plot similar to the original Star Wars and made it fresh by having it be performed by a talented diverse cast, so too does Book Club find ingenuity in its frequently paint-by-numbers plot by making sure its the rare American comedy to be headlined by four women over 60, all of whom are portrayed by acting legends. Yes, there are plenty derivative qualities to be found in here, but choosing to create a humanizing portrait of different types of women in this age range is certainly not one of them and having that kind of unique quality serve as the foundation for Book Club helps somewhat offset its formulaic tendencies.


These four lead characters, Vivian (Jane Fonda), Carol (Mary Steenburgen), Sharon (Candice Bergen) and Diane (Diane Keaton), are all long-time best friends who always meet up once a month for a book club. For their newest meet-up, Vivian shows up insisting their newest book be Fifty Shades of Grey. Though the other three women think the book sounds ridiculous, they soon become so enamored with the provocative material of this tome that they all get the urge to spice up their lives. Carol wants to mix up her stagnant marriage to Bruce (Craig T. Nelson), Sharon is giving online dating a try, Vivian is navigating a potential romance with a former flame played by Don Johnson and Diane is evading her overprotective daughters so she can hook up with airline pilot Mitchell (Andy Garcia).

Writers Bill Holdermann and Erin Simms (the former individual also directing Book Club) execute this premise in a way that's heavy on predictable outcomes, but thankfully, also heavy on enjoyable comedy with the best laughs stemming from the interactions between the four lead characters. Anytime these women get together for their book club or just to hang out is a total riot, especially since the quartet of actors portraying these characters have excellent chemistry with one another that convincingly conveys the idea that they've all been friends for decades now.  These sequences also contain the most memorable dialogue of the production which include an explicit reference to a 2011 Werner Herzog movie I never expected to be mentioned here.

When the lead characters get separated and go off to their own individual plotlines, the results are more mixed, mainly because the merely amusing rapport between, say, Mary Steenburgen and Craig T. Nelson isn't as fun as watching Steenburgen's uproarious rapport with Jane Fonda. Fonda, by the by, is incredibly funny here as she seems to be having a ball playing basically the equivalent to Stifler from American Pie in her group of friends. A shame such a lively performance gets stuck with the weakest subplot of the film since she shares the majority of her screentime with Don Johnson whose performance here just isn't all that lively or charismatic. Johnson seems to be struggling to sell the dialogue he's working with and the fact that Jane Fonda is so thoroughly reveling in the role she's been handed that the lackadaisical nature of Johnson's performance is really hammered home.

Diane Keaton and Candice Bergen fare much better in their subplots, with Keaton's romance with a hunky airline pilot working not only thanks to the delightful work put in by Diane Keaton, but also because of  Andy Garcia working wonders in the role of a kindly heartthrob. Whereas Don Johnson seems constantly uncomfortable in the part of a romantic interest, Garcia brings the perfect level of charm to this part that makes it clear why Keaton's character would fall for him. Meanwhile, Bergen steals the show (an impressive thing to do considering the three leading ladies she shares the screen with) in her subplot about giving internet dating a try that results in Bergen getting to use her skillful gift for comic timing to score some of the biggest laughs of Book Club.

It's primarily strong lead performances like the one Candice Bergen gives and the frequently pleasant comedy that steal the show in Book Club, with both elements being good enough to help mitigate some notable flaws like the frequently perfunctory cinematography and some subpar acting. You can certainly better movies starring any of the individual actors headlining Book Club but there's also certainly some real entertainment to be had in watching this quarter of silver screen icons rubbing shoulders and engaging in some light-hearted comedy. Is it all formulaic? Oh, for sure. Is it also reasonably fun? Also for sure.
Posted by Douglas Laman (NerdInTheBasement) at 12:08 PM