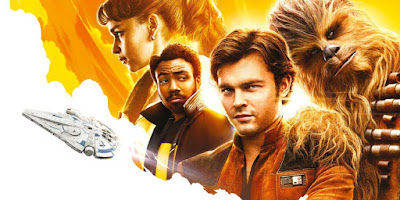 In its second weekend of release, Solo: A Star Wars Story wasn't able to bounce back from an underwhelming opening weekend. The Ron Howard directed movie plummeted 65% to gross another $29.2 million, giving it a 10-day domestic total of $148.8 million. This kind of second-weekend drop in the mid-60% range is typical for movies opening over the Memorial Day weekend frame, though some features that have opened over this holiday weekend, namely MIB 3, have managed to avoid such a steep decline. This is the second biggest second-weekend drop ever for a Star Wars movie and the ten-day total of Solo is still behind the three-day opening weekend of Rogue One. I'm thinking we're looking at a final domestic gross between $215 and $225 million here.

Holding better this weekend was Deadpool 2, which fell 46% to add $23.3 million to its domestic gross. Through 17 days of release, the newest Wade Wilson adventure has secured $254.6 million and is on track for a final domestic gross between $310 and $320 million, which would make it the fifth biggest R-rated movie of all-time.

The biggest of this weekend's trio of new wide releases was Adrift which grossed $11.5 million. Opening in the same range as box office dud The Mountain Between Us from last Fall (both Mountain and Adrift cost $35 million, interestingly enough), Adrift wasn't able to break out despite solid reviews due to more generic marketing that didn't establish much of a reason for the viewer to become personally invested in the characters journey to get back home. The fact that Shailene Woodley was paired up with Sam Claflin, an actor I personally really like but who isn't a guaranteed box office draw, may have hurt the film too since it didn't have an extra boost of star power to its name. At least Adrift gave STX Films its tenth movie to open to over $10 million and its fifth movie to open to over $10 million in the last eight months.

Holding solidly in its sixth weekend of release was Avengers: Infinity War, which dropped 40% to gross another $10.3 million. That's a better post-Memorial Day hold than the last two Avengers movies as well as Guardians of The Galaxy Vol. 2. This newest Avengers movie has now grossed $642.8 million domestically. Rounding out the top five was sleeper hit Book Club, which dipped only 32% to gross another $6.8 million, giving it a domestic total of $47.3 million, meaning this film is just $2.7 million shy of doing five times its budget.

Debuting to decent numbers this weekend was Upgrade, the first movie in 13 months from BH Tilt, Blumhouse Production's self-distributing studio meant to release movies in smaller theaters counts with a smaller-scale marketing effort. They managed to score their second biggest opening weekend ever with Upgrade, which grossed $4.4 million at 1,457 locations for a per-theater average of $3,060. If it doesn't fall off like a stone in the next two weeks, there's a chance Upgrade could become only the third movie ever from BH Tilt to gross over $10 million domestically, a solid haul for the micro-budgeted action film.

Life of The Party held quite well this weekend, dipping only 35% to gross another $3.4 million for a domestic haul of $46.3 million. Looks like this one will finish its domestic run just under or over $55 million, which isn't too far off from the $63.2 million domestic cume of the last Melissa McCarthy/Ben Falcon collaboration, The Boss. Also holding well in its fourth weekend of release was the thriller Breaking In, which dipped 34% to gross another $2.8 million for a $41.3 million domestic total to date.

Johnny Knoxville's Action Point went off the rails this weekend with a $2.3 million debut. That's the 23rd worst opening weekend ever for a movie opening in over 2,000 theaters. Without the Jackass brand name or any other hallmarks of prior hit comedies Knoxville headlined, Action Point had a hard time standing out in the marketplace. Still, I doubt anyone thought Action Point's entire three-day opening weekend would be so bad that it ended up grossing only 65% more than the $1.4 million that Dirty Grandpa grossed in its Thursday night previews.

First Reformed expanded its location count to 91 theaters and grossed $455,455 for a per-theater average of $5,005 for a current domestic total of $1,057,431. This one's holding very well through its three weeks of limited release, I'll be curious to see how far A24 expands it throughout June. Eight weekends into its domestic run, The Rider expanded to its widest theater count yet as it went into 224 locations and grossed $243,055 for a per-theater average of $1,085 and a domestic total of $1.7 million. On Chesil Beach didn't fare too well in its expansion into 89 locations as it grossed only $142,000 for a $1,600 per-theater average, giving it a domestic total to date of $345,606. It's looking more and more likely that this one manages to have a final domestic gross below $1 million, which would make it only the fourth Bleecker Street movie to gross under $1 million. Meanwhile, American Animals got off to a great start this weekend with $140,629 at 4 locations for a per-theater average of $35,000. That's the third biggest opening weekend ever for The Orchard and its biggest opening weekend ever for a movie opening in less than 215 locations. That's the sixth-biggest limited release opening weekend per-theater average of 2018 too. Looks like the very first movie handled by MoviePass Ventures is off to a mighty fine start at the box office. No word yet on how How To Talk To Girls At Parties fared in its expansion into 103 theaters nor how A Kid Like Jake performed in its limited release opening weekend.

The top 12 movies this weekend grossed a total of $99.6 million, the second worst sum seen by the 22nd weekend of any given year in the 21st century. It's also the second lowest-grossing weekend of 2018, only ahead of 2018's Super Bowl weekend. Without a post-Memorial Day weekend hit like Snow White And The Huntsman, Maleficent or Wonder Woman around (hmmm, those are all female-led titles too, something the marketplace is sorely missing right now aside from Adrift and Book Club, that should also help explain why things are so weak at the box office right now) nor massive holdover May holdovers, the first weekend of June 2018 was a total snooze-fest. Things should pick up in the next few weeks as Ocean's 8, Incredibles 2 and Jurassic World: Fallen Kingdom show up, though Solo has shown that even the most seemingly invulnerable franchises are prone to box office blunders.
Posted by Douglas Laman (NerdInTheBasement) at 10:48 AM